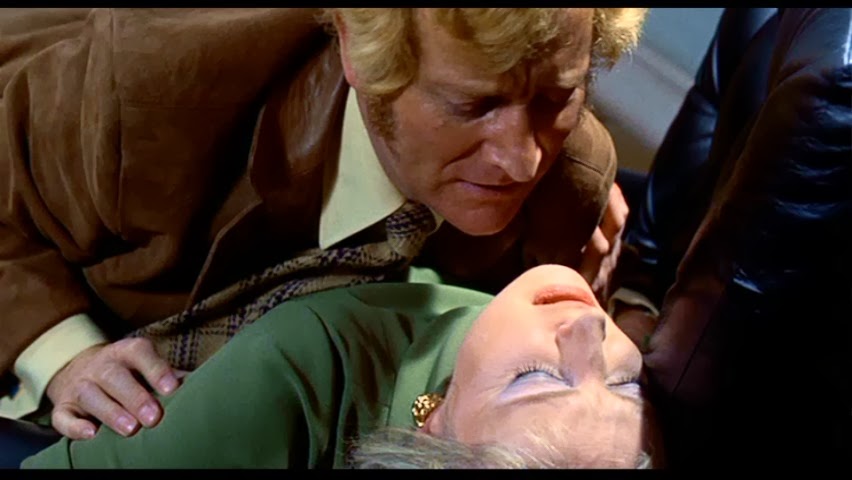 Some forty odd years after its release, there is undeniable charm it what endures on screen. Made under less rigorous intentions than the projects that preceded it, this is a film where the payoff is essentially established by a consistent and hard-edged screenplay that wraps its characters in a cocoon of social hysteria, echoing the psychological quality of Fritz Lang’s “M” but portraying it as straight audience entertainment. After a series of movies that were not well received by the public because of their highly structured nature, most found such intentions refreshing, especially as the artistic freedom of the 70s acted as a wall to those resistant to change. Had he lived long enough to pursue that avenue to greater lengths, though, Hitchcock might have evolved that standard further, and perhaps with much more integrity than those who chose to exploit the new frontier for no echoing purpose.

In basic breakdown, the movie is about the pursuit of a killer. On one early morning during an outdoor press conference somewhere in the heart of London, the nude body of a woman washes up on a nearby riverbank; all that remains of her is a deathly stare, and the necktie that suffocated her still wrapped around her neck. This event, we soon realize, is a repeat offense that predates the start of the movie, and the public is kicked up into a state of unrest as the unknown assailant – known as the necktie killer – remains at large. Hitchcock’s camera, following a life-long tradition, is ahead of the outcome; because it shows us the culprit’s identity from the onset, there is a sense of misfortune that weaves through the action, especially as the walls begin to close in around the unlucky protagonist who has a knack for always being in the wrong place at the wrong time.

His name is Richard Blaney (Jon Finch), and early on an acquaintance observes he is the “best pilot that ever poured a pint of beer.” Alas, he has been on a downward slope ever since his glory days as an officer for the Royal Air Force, and in the early scenes he is fired from his job as a bartender for swiping liquor from the pub supply without paying for it first. Dialogue exchanges of biting intensity ensue between him and the enraged owner, and Richard storms off to see his ex-wife (but still good friend) Brenda (Barbra Leigh-Hunt), who runs a local singles agency. He needs money; she has reservations about giving him any, sensing his downward spiral. He has an outburst at her office that is witnessed by Brenda’s secretary, and that observation becomes key in the second act. More arguments follow, some in a restaurant on the same night, and all with the same biting realization: Blaney has certain anger management issues that are magnified by his inability to cap them in public settings, and those that witness them paint the unfortunate portrait of a man who, really, could be capable of any kind of behavior, including crimes against women.

What he is innocent of, however, is necktie murders. The real villain is a little more understated about his antics, perhaps because the formula demands it; a simple fruit merchant with a dry wit and seemingly upbeat sensibility, Robert Rusk (Barry Foster) is usually seen engaging in friendly banter with a wide assortment of people, including Richard, who considers him a friend. They share jokes, talk about beautiful women, and compare notes in their daily encounters. Unfortunately, the situation for Richard becomes even bleaker when Robert, so careful with his dark secrets, sets his murderous sights on Brenda as his newest victim, and a wrongfully timed observation turns her indignant ex-husband into the primary suspect. The murder scene is handled with certain alarming clarity, even for Hitchcock: bare breasts, rape and strangulation are put on a level of display that is in sync with the 1970s sensibilities, yet somehow we see it in context with the director’s own work first and foremost, and that adds a disquieting shock to the details (rape was addressed eight years prior in his masterpiece “Marnie,” but with more subtle suggestion).

The grand tradition of Hitchcock’s thrillers is that grizzly circumstances are grounded in pitch perfect performances, and “Frenzy” volunteers no less of a satisfying arsenal. Part of that, we observe, comes from the utilization of very distinguished actors in key roles, including Jon Finch as Robert, who played Macbeth in Roman Polanski’s brilliant adaptation of the Shakespeare tragedy only two years prior. Others, like the regal Jean Marsh, play with their screen personas with underlying caution, like witnesses to a brewing storm – she is important to the ripples of the initial story arc, and an eccentric housewife (Vivien Merchant) to an ambitious inspector is instrumental in creating the thread of doubt that will fuel the conclusion. Of the key players that populate the material, in fact, only Foster as the killer seems somewhat out of league with what he is handed; ordinarily so mannered in style and tone, the performances seems labored, almost shapeless. It is not of the quality of Anthony Quinn as Norman Bates, to be sure. But in a movie called “Frenzy,” what is the real center: the psychology and depth of a murderous tyrant, or the ceaseless hysteria he inspires?

There are narrative and technical details that are the basis for endless complexity. Consider the very necktie itself, another one of the classic tools of implication the director is famous for; rather than use a blunt or sharp object as an instrument against one’s mortality as most films might, he instead uses something much more obscure, perhaps as a way to make a pointed statement about how evil impulses are not limited by social classes. Later in the film, during a scene in which the killer has struck again and attempted to dispose of the body on a potato truck, his lapel pin becomes equally significant in that regard (though its details remain too precious to divulge even now). The anchor: several key shots in which, yes, the filmmaker’s trademark camera tricks envelop the narrative, the most famous being a scene in which the camera pans out from the killer’s upstairs apartment, down the steps and into the street below (this was actually executed in two separate shots, but the editing is so seamless that one doesn’t detect it unless looking extremely close).

“Frenzy” was the last of the great director’s thrillers that told the story of murder and hysteria, and yet of all of the movie’s notable characteristics, none sticks out greater than the undercurrent of impatience that seems injected into the details. All artists find themselves going home in one form or another during their career – some more willing than others – and once the greatest of provocateurs in British cinema found Hollywood knocking on his door, he left behind the islands and found success in the largest of movie markets for well over three decades, with almost no hint of looking back. How could he even consider it, after all? The American film industry embraced his way of thinking right out of the gate, mostly because of his impeccable timing within stories that thought outside of the proverbial box in order to challenge moviegoers (and in some cases, even the censors). Once it became apparent, at least in his mind, that the end of a long and rewarding career was drawing to a close, British culture once again seemed to be calling his name (at least narratively).

The problem is that we suspect he was not as fond of returning that call with any remote sense of eagerness. It shows in small increments. Ordinarily so on target with the droll sensibilities of his movie plots, the driving force of “Frenzy” seems curiously corroded. When characters speak, they don’t deliver their lines with conscious enthusiasm; instead, they approach it as if groaning behind their grins, unmoved by the disingenuous nature of the material.  The director and his writer Anthony Shaffer were reportedly criticized heavily on set at the time for concocting substance that sat far outside the cultural precision of English etiquette, and many of them believe their boss had lost his fluency for it (Finch reportedly suggested that it felt like working with an amateur who didn’t “get” British panache). Was it really that, or was the aging filmmaker simply tiring of telling stories of cold-blooded murderers over and over again?

I subscribe to a simpler theory: no artist is ever so consistently perfect, and sometimes the muse of inspiration wavers in the face of age, frustration, stagnation or fatigue. After making “The 39 Steps,” “The Lady Vanishes,” “Notorious,” “Rope,” “Strangers on a Train,” “Vertigo,” “Psycho,” “Marnie” and “Torn Curtain” – perhaps the largest arsenal of near-perfect films of any working director of his era – what was left of the gift by the time “Frenzy” came to fruition? Most filmmakers would be proud to exit the theater with a satisfactory epilogue, even if it had its weaknesses. This is certainly not one of the great Hitchcock movies, to be sure; it doesn’t come close to the class of “Psycho” or “Dial M for Murder” in its audacity, nor does it match the technical prowess of “Rope” or “Vertigo.” But there is a thorough sense of savage entertainment boiling over the substance pot here, and the material is well acted, skillful, and photographed with the same level of intensity as the master’s greatest achievements. When the curtain comes this close to falling, what a wonderment it is to witness the genius of a great mind continue to find ways to entice and satisfy, even if in slightly lesser increments than before.