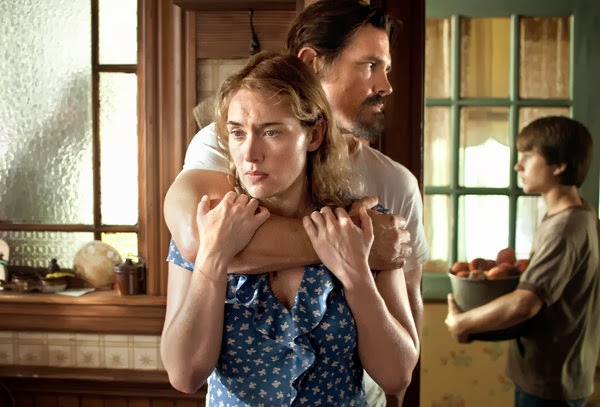 The film stars Josh Brolin and Kate Winslet, two fine and established actors who appear here as if they owe someone some big favors. She plays Adele, a divorced mother in the late 80s whose recent past has given her such a bleak outlook on her own life that she seldom leaves the house unless an absolute necessity. Her teenage son Henry (Gattlin Griffith) appoints himself the nurturing sort to his agoraphobic caretaker, and the two share close moments scattered across the first act: he serves her breakfast in bed, she teaches him how to dance in the kitchen to the tune of old records, and there is even a scene where he makes her a “coupon book” – entitling her to good acts around the house – in some attempt to give her the qualities she is missing from a companion. Henry narrates much of this material from a later age with flaccid observation, suggesting a silent discomfort in what he reflects upon. Can we blame him? The idea of referring to yourself as your mother’s surrogate husband is a questionable one, even in a movie that is clearly well meaning.

Adele and Henry’s isolated existence is abruptly interrupted when, while the two of them are in town shopping, a mysterious man with a goatee and firm eyes wanders into their bubble (Brolin). Distraught and clearly hoping to go unnoticed, he asks for a ride. A splotch of blood on his white shirt catches Adele’s eye, and she suggests he look elsewhere. Alas, his insistence (not to mention his suggestive threatening nature) wins out, and the two wind up taking him home with them at his request. The skinny: the man, named Frank, has escaped from prison following surgery on his appendix, and local law enforcement is on a mad sweep of the town in order to apprehend him. But after a day of hiding out inside their quiet and peaceful abode, it’s clear there is more to Frank’s story than meets the eye – not the least of which is that the suggestion he is a known killer seems curiously out-of-character for someone so eager to fix things around the house and see Adele as an object in need of love and nurturing. She too senses that quality, and two bond quickly and passionately through an interaction that is silent but realistic.

Most of this material is written with passive discretion; characters don’t directly speak about their feelings or goals, they just sort of arrive there out of narrative necessity. That can be a virtue in movie melodramas – especially in the age when filmmakers use dialogue as a means of full disclosure – but for “Labor Day” it creates a suggestive nature that is sometimes misleading. The movie’s conflicted young observer Henry indirectly emphasizes this notion in scenes that involve interactions outside the house, including one he shares with his father (who takes him out for dinner on Sundays with his new family and siblings), and another in which a female loner about his age suggests that parents who find new love interests tend to abandon their kids. In both instances, the screenplay takes the approach that Henry will develop insecurities that threaten to unravel the relationship his mother has with this escaped convict, but there’s never any action that follows through with that insinuation, and the narration calls little attention to any feelings that might result from those seeds being planted. Reitman, I suspect, is trying to add some level of underlying tension to a story that would otherwise play as straightforward here, but his endeavors are too unfocused to do anything other than leave us with a red herring.

Fallacies, at least, inspire some level of commitment in filmmakers, whereas more pointed problems can suggest laziness. “Labor Day” alas is just as full of the latter in that regard; aside from the fact that the idea of an escaped convict stowing away and then falling in love with a lonely woman over the course of a single Labor Day weekend is completely ludicrous, none of it is executed with any feasible display of perception. Consider, for instance, the scenes in which Frank wanders outside of the house – on a property fully visible by the street, I might add – and helps repair the family car, cook on the barbecue and teach Henry how to play baseball; if a suburb is small enough to make daily check-ups on Adele from nearby neighbors a norm, how is it that no one notices this mysterious stranger sooner, especially considering how unlikely it is for her to have outside guests? The screenplay spends all of its time borrowing from the source material, and nothing from the human brain. Simultaneous to those observations, we also get an assortment of scenes that are edited into the central story arc without any reasonable pattern (one key set of sequences involves flashbacks to Frank’s early years, in which the actual content of his crimes is slowly revealed). Other scenes that deal with Henry’s pubescent urges are of the caliber of after school specials, and the talkative female counterpart they pair him with recites dialogue that is way too pointed and insightful to be coming from a real teenager’s lips. And despite the correlation it has to the all-important resolution, does a movie of this nature really need a bizarre five-minute sequence in which the convicted escapee teaches mother and son how to make a peach pie from scratch?

Winslet and Brolin are such gifted and consistent actors, seeing them in something so beneath them inspires us to take pause. What motivated them to associate themselves with a movie like this? How did they truly feel about the characters they were playing? Did they believe in the material as much as its writers did, or were they just exercising their rights to do projects for the financial benefits? One can’t accuse them, at least, of not giving it their all; as Adele and Frank, they are perfectly understated in their performances, and interact with a fluidity that suggests they could be successful together in future collaborations. I even admired the way both of them handled the climax, which, to its credit, doesn’t necessarily bow to the conventions of a Hollywood happy ending. But what a depressing mess they are trapped in with “Labor Day,” a movie that plays like a bunch of gifted musicians gathering together in the orchestra pit and then realizing they forgot their sheet music halfway into the symphony.