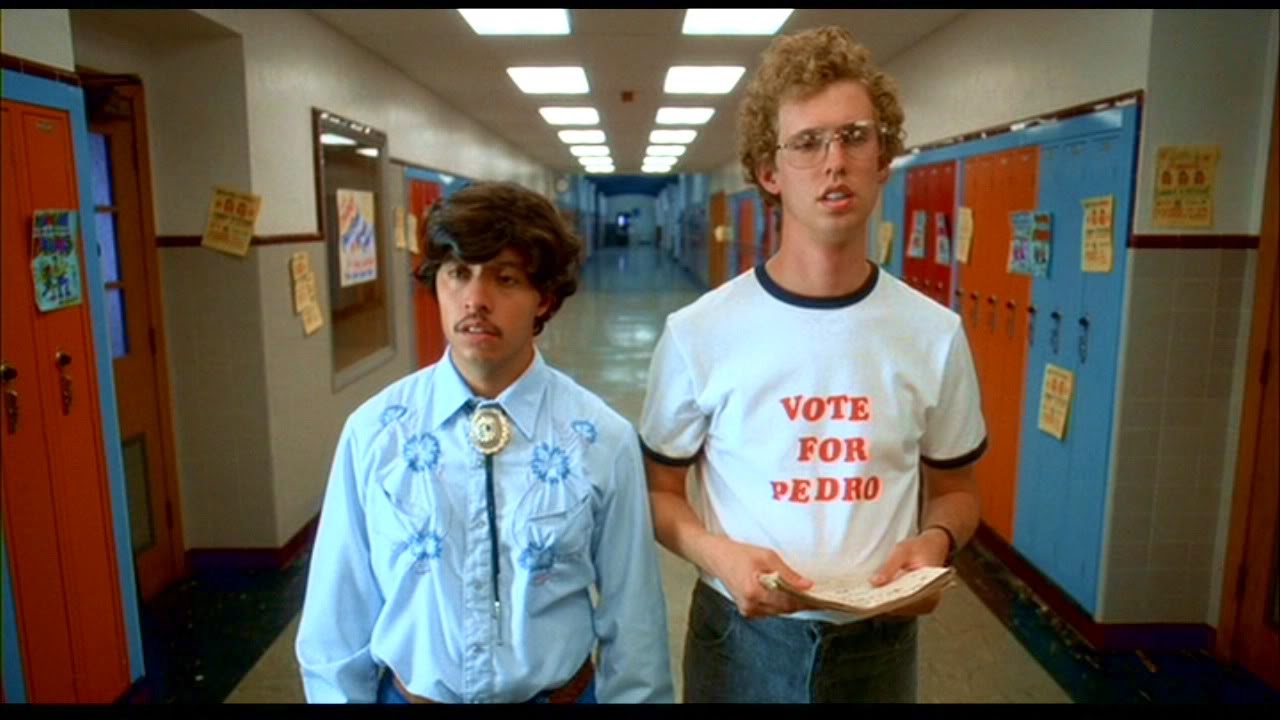 When I was in high school, those of us branded as unpopular sorts were rather thankful to skirt through the cliques with minimal notice. As awkward as it is to be on the outside of teenage coteries, it is usually more discomforting to be in the crosshairs of those who relish the opportunity to expose your social dysfunction. I admired those that stood their ground when the time came for their own public ridicule, but didn’t necessarily envy their positions; many were simply too enraged or impatient to be silent, while others lacked the skill to avoid such situations in the first place. One constant between them, though, was that their unconventional traits shielded others from recognizing the often brilliant minds that were concealed underneath. Watching “Napoleon Dynamite,” I was curious as to what some of those former classmates of mine would have thought of the eccentric main character that occupies the majority of this story. Would they have been sympathetic to his inept social skills, or infuriated by his lack of mental capacity?

I was always taught that nerds – dorks, geeks, pantywaists, whatever classification you put them under – were obligated to be somewhat smart in the movies. That usually allowed audiences to find a contrast between them and those too vapid to stray far from a shallow pack mentality. But “Napoleon Dynamite,” the most flaccid movie experience of recent years, exists entirely in a universe bankrupt of that basic awareness. Some have argued this approach is decisive for underlying satire, and the movie endures even today among film circles as some kind of profound statement for would-be underdogs. Those that subscribe to such philosophies, I suspect, are probably too dense to understand irony or nuance. This is a film made by underachievers shamelessly smirking behind the camera, unmoved by the prospect that there may be viewers out there observant enough to notice that the movie has even fewer things to say than its awkward and pathetic characters. That not only makes it a bad movie, but a condescending one too.

The story (if you can call it one) revolves around a shy but apathetic high school teenager played by Jon Herder, whose indifference in everything ranging from home life to schoolwork serve to highlight a school environment that (perhaps rightfully) views him as goofy. His eccentricities are not exactly unique, however. A brother Kip (Aaron Ruell) is cut from the same cloth, spending all his time flirting with girls on the internet and speaking as if his nasal passages are clogged. A new kid at school named Pedro (Efren Ramirez) is muted and innocuous, especially when talking about how he hopes to win the affections of ladies. One day a girl named Deb (Tina Majorino) comes to Napoleon’s door to sell him glamour shots at the mall for 75 percent off, but runs away when they both begin exchanging uncomfortable dialogue (in a later scene, he attempts to break the ice with another by reciting this doozy: “I see you’re drinking one percent milk. Is that because you think you’re fat?”).

The discomfort goes on and on, for them as well as us. Pedro decides he wants to run for class president, even though the odds favor the school’s popular girl Summer (Haylie Duff), whom he was unsuccessful in wooing. Napoleon develops a friendship with Pedro because, we suspect, they have a commonality in being displaced and indifferent. He and Kip’s Uncle Rico, meanwhile, spends the majority of the movie making fun of his nephews while regarding his own teenage past with unending nostalgia, especially when it comes to remembering his glory days on the high school football team. “If coach had put me in the fourth quarter,” he says in one scene, “we would have won the state championship.” Think for a moment about whether the filmmakers are trying to replicate the Matthew McConaughey character from “Dazed and Confused” here, and then come talk to me about who is funnier.

The running joke here is that everyone in and around Napoleon’s sphere of social ineptitude will find no meaning in a daily grind of boredom and disconnected observations, but the movie is burdened by a series of setups with no punch lines. Consider a scene in which a group of students is performing “The Rose” in sign language while classmates smirk at them, or another moment in which a farmer shoots his cow in the face while a school bus full of kids is driving by. Their existence, I guess, is indicative of what audiences expect of movies made under the MTV Studios umbrella: a series of randomized scenarios meant to simply create outlandish momentary reactions. That would work in the context of, say, a “Jackass” vehicle, but not here. We react, but without interest or understanding. The approach has all the lasting charm of a train derailment, but at least the train is going somewhere before it is brought to disaster.

A checklist of what is wrong with this movie would read longer than most grocery lists in your average household. At 82 minutes, the movie seems unbearably long; you know it’s true when you find yourself staring at your watch on no less than six occasions. The setting is inconclusive, because music and computers hint that it is late 90s while the fashion sense of many characters points to the 80s (although, I guess, you could use the argument that they’re just too stupid to know what year they’re in). The Napoleon character is seen, I suspect, as some kind of comedic projection of the apathetic hero of “The Catcher in the Rye,” but that implies he has anything more than the personality of an accordion. His dialogue, furthermore, reads like sound bites concocted in discarded stand-up routines (in reference to a drawing he makes for a possible romantic interest, for instance: “It took me three hours to finish the shading on your upper lip!”). And by the time the movie slogs its way toward a third act, the most interesting character we have seen is a Llama, and that’s just because he is the only thing in the movie smart enough to keep quiet in a sea of unusual idiots.

Who was this movie really made for? No one, I suspect, other than its own filmmaker, who has concocted an endeavor under the delusion that its humor will likely go over everyone’s head but his own. What he doesn’t count on, though, is that moviegoers are usually smart enough to pull away such shameless illusions. For him, I’m sure the Napoleon character does legitimately reflect a view he has about socially awkward teenagers who remain complacent in our culture. But what does it say to assume that all of them have the mental capacity of goldfish, especially when his audience may contain some of those who endured similar fates in school while still holding onto a few IQ points? There is a scene in early on when a bunch of teen girls observe judgingly while Napoleon plays tetherball in isolation; watching it, I found myself hoping the camera would keep its distance long enough to find something more interesting to hone in on, like the asphalt.

This movie's a classic, David! GOSH!

Try to be a bit more positive, youre acting like the writers only wrote slags about your family...

This is single handedly the greatest review I have ever seen. Thank you so much David Keyes for making me laugh for a nonstop 20 minutes.

lol so pretentious, the humor in napoleon dynamite is just darn good. i feel like you are reading more than a bit too far into it.