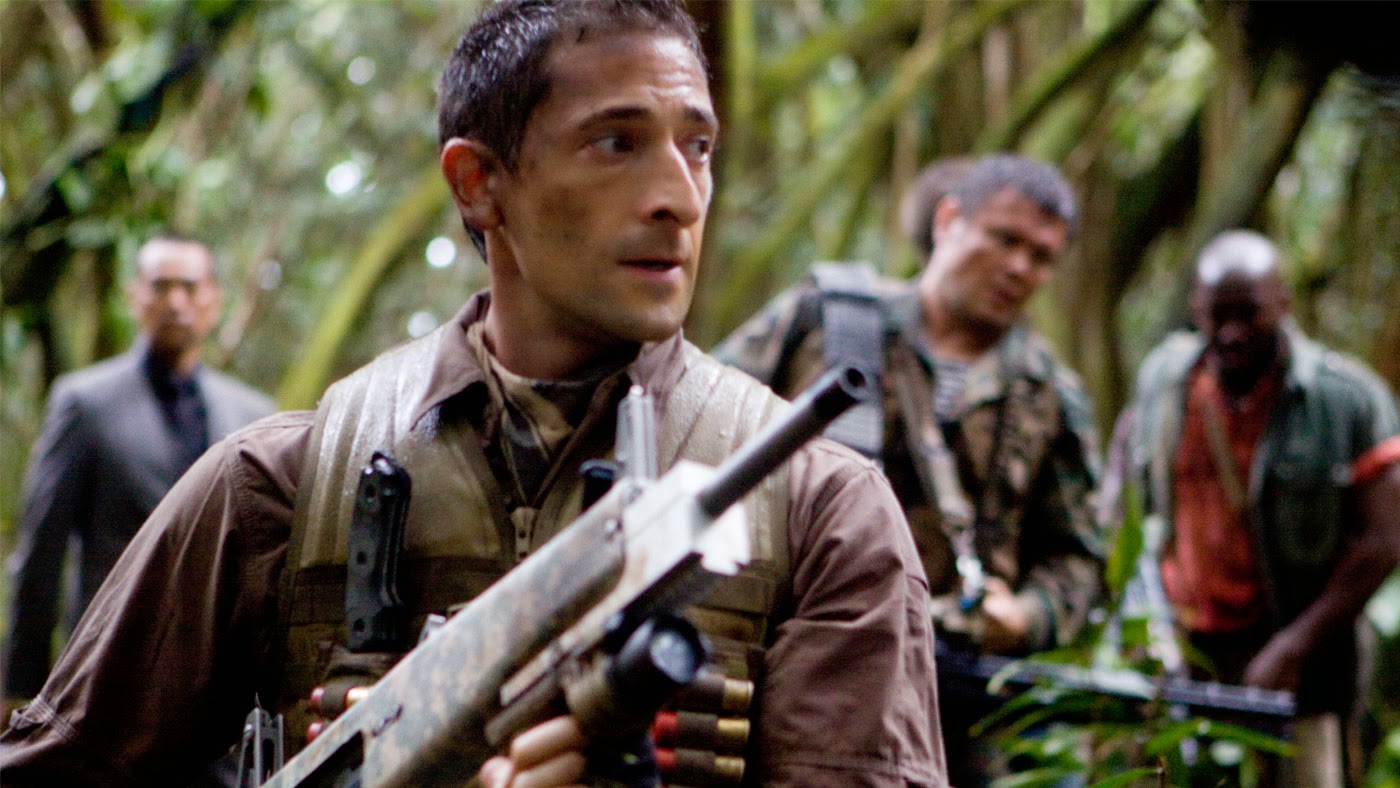 “Predators” begins with a shot of stupefying ambiguity: a man named Royce awakes and discovers he is plummeting towards the ground from high in the air, completely oblivious to how he got into such a grim predicament. There is a sudden realization that he is armed with a parachute, and down he glides right into the bushes of a foreboding jungle, where similar faces of incredulity too begin appearing from the skies above. None of those who survive the fall know one another, but that is the least of their worries: what circumstances placed them together in this damp and dangerous space to begin with, and who or what is behind their unlikely gathering? To an audience slightly more informed than the victims of this ambiguous circumstance, this much is constant: things are about to get very grim for each of them, especially when the presence of a rather familiar movie villain emerges in the shadows.

Perhaps it needs no introduction, either. Often obscured by a cloaking device that allows it blend into its surroundings, the “predator” itself – a lively creature as ugly as it is menacing – previously came to cinematic fruition in 1987 when a band of steroid-pumped commandos were displaced in South American jungles, and then gradually picked off by a beast that seemed to exist solely to hunt and collect trophies. To us, that creature was in the tradition of the gooey movie monsters that permeated from the industry throughout the decade, but its time came and went with little forethought about a prolonged future until the “Aliens vs. Predator” films fouled up movie theaters decades later. The arrival of a new film is substantiated, I guess, by the success of that series, but it also encourages further contemplation. What inspired filmmakers to assume that the predator itself was interesting enough to revive on isolated terms, especially in the era of transformers and comic book heroes?

If we approach the movie without that connotation, then “Predators” does begin to work, at first. The early scenes, directed with ambition by Nimrod Antal, point to a skillful sense of pacing; we meet the eight core characters gradually, as survivors from the fall cross paths with one another and then begin to wander aimlessly through the bushes and trees searching for a meaning to their gathering. Dialogue is sparse and used only in advancing tension, while ominous rumbles off in the distance suggest there are eyes spying their antics, though there is little sense of outright terror within them. These are obviously individuals with hard exteriors who have been weathered by some grave circumstances. Several, to boot, fit perfectly in line with that well-known “Cameron ensemble” standard that requires teams in science fiction films to all be individually quirky, even though their mannerisms are interlaced with menace. Aside from a doctor played by Topher Grace whose questions seem staged for comic relief, in fact, the rest of the survivors are apparently all mercenaries or professional killers (one is even a death row inmate, somewhat elated that his new predicament took him away from facing capital punishment in just two more days).

Recalling the original “Predator” film, which too relied on an assembly of robust but stone-faced human faces to be at the center of the action, none of these traits are that far out of step with that dependable sci-fi thriller formula. Alas, the screenplay by Alex Litvak and Michael Finch opts to step up the game by disconnecting themselves from certain movie logic, as the eight ruffians wander to the edge of their wilderness and discover, to certain amazement, that they are not actually on planet Earth, but rather on some sort of vegetated planet orbited by others that sit alarmingly close on the horizon. The image the movie creates is at least inspired, but it calls into question the necessity for logic: if a group of dangerous criminals and professional killers all are snatched for the sake of turning them into prey for ambitious Predators, what’s the point of pulling them away from Earth? What planet is this, anyway? And how does Royce (played with innocuous conviction by Adrien Brody) arrive at the conclusion, rather assuredly, that they are on a game reserve when the identity and purpose of the captors still remains a mystery?

The predators themselves never emerge here as tangible villains; they are narrative gadgets used to stimulate the plot into its ordinary cycle of traps and murders, which are occasionally interrupted by those cliched outbursts from characters who feel obligated to reduce their observations to cynical sound bites. Somewhere in there the movie also makes a lame-brained attempt to benefit the survivors by giving them a secondary resource: a character named Nolan (Laurence Fishburne), who is apparently a survivor from a previous round of killings left unguarded by the ambitious and cunning Predators. Unfortunately, you get the sense that even the writers knew the mistake of this conviction, because the movie forgets completely about him after fifteen minutes, and returns to its formula without any regard to the glaring misstep.

So why award the movie two and a half stars, you may ask? Because the end result is, to its credit, harmless and energetic. There is no forethought in anyone’s head here that what we are seeing is a movie striving for anything other than passable matinee mediocrity, and on that basis there are a lot of moments that, once you disconnect your brain, are amusing on some level. I also admired the technical energy of the film, because it does not try to overburden the screen with special effects or explosions. The visuals match the writing, and you don’t get the sense that anyone involved in making the movie was foolishly trying to one-up one another in some vain attempt to create elaborate illusions of importance. When it comes to the accessibility of science fiction movie series, “Predator” never reached the powerful and stimulating levels of, say, the “Alien” franchise, but why completely hold that against the filmmakers now? Here is the third in a series of movies that play like excursions into the minor leagues, and it pitches the material with the kind of innocent accuracy you would expect of it.