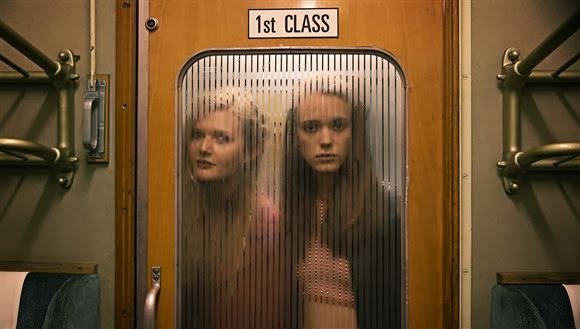 When it comes to the human sensations that seek to consume us, sex is often the most destructive. If our passions have the capacity to unravel temperaments, then intercourse with another can send ripples through all facets: physical, emotional, even psychological. It inspires a wide range of dissonant emotions, ranging from joy to satisfaction and even pain, occasionally in succession to one another. Pleasure at its primal core is an earthly luxury, but there exists a boundary at which that privilege becomes outright addiction – some are so absorbed by the excess that it fragments their perspective. And yet the degree to which one seeks sexual release in high increments may in fact reveal a side of our human nature that is rarely recognized: the concealed part of our psyche that craves chaos and disregards control or consequence. Consider this fascinating paradox when the characters of “Nymphomaniac: Volume I” are on screen – do their carnal conundrums exist because they submit to incessant physical stimulation, or is there a darker nuance unravelling them in between orgasms?

The wounds of the weathered have greatly intrigued director Lars von Trier in the recent years, and now here is a movie – or the first of two parts, at least – that comes to the epicenter of that persistent obsession. Some sense of overwhelming irony permeates from his trilogy of recent films, which began with the savage “Antichrist” and continued with the melodic “Melancholia” – in each, he finds stories in which characters drift beyond the razor’s edge in dealing with toxic emotional states, often with bleaker realities blurring the edges. Reportedly, this trend of core-cutting films is the result of a bout of depression that he deals with off camera, but perhaps that only explains part of the formula. There is a range in his recent endeavors that suggests there is more than just surface intrigue in the fringes of his collapsing heroes; to him, they are not so much carriers of mental chaos as they are the unfortunate byproducts of a society that is content to look the other way. A society, I suspect, that he probably knows all too well.

The lead character of the film is Joe, a woman who in the early scenes is found unconscious and beaten in an alleyway by an unassuming man named Seligman, who resolves to offer her shelter in his quiet apartment as a means of extending assistance. She is played here by Charlotte Gainsbourg (a staple in all of von Trier’s recent endeavors), in a role that begins with subtle suggestion until it is absorbed in the stark nature of her activities. Joe, you see, is a self-proclaimed nymphomaniac: a fanatic of sexual promiscuity, in essence, who observes early on that she is an “addict out of lust, not of need.” Uncertain of her new protector’s perception of reality, she emphasizes the stories she tells with the illusion of self-loathing: most of the accounts are preceded by humbled prefacing, even though it is clear from the content that there are doubts as to whether her regrets are authentic (never mind, of course, that they may have resulted in the recent bruises on her face).

Her antics begin at that early stage of adolescence usually reserved for the likes of Truffaut or Babenco, who too thrived on telling stories of rebellious youths. Joe (played in younger years by Stacy Martin) felt urges, the movie suggests, before the onset of puberty, when she would engage in playtime with friends while going without underwear beneath her school uniform. Her father, played by Christian Slater, makes note of her curiosity early on but doesn’t initially perceive danger, and the two develop on their father/daughter bond through his desire to educate her about trees. Alas, the innocent and pure Joe finds her hormones abruptly raging like a biological alarm clock, and when she crosses the path of a lowbrow motorcyclist named Jerome (Shia LaBeouf), she gives away her virginity like it were little more than a forgotten keepsake. So much for trees being an efficient distraction, you could say.

The experience is negative, but she forges on. A girlfriend and she engage in a contest aboard a train, in which one of them is rewarded a bag of candy depending on who has sex with the most guys on board. Other encounters follow – some random and anonymous, others strategic, most of them with different partners. Seligman absorbs her stories with certain skepticism, but does not so much carry judgment as unending fascination. There are long pauses between flashbacks, in fact, in which they wax philosophical over the game that is nymphomania: he likens the art to that of fly fishing (with an array of analogies and details to create parallels), and there is even the use of the progression of musical compositions as a metaphor in illustrating the ecstasy of climax.

Conflicts emerge. Jerome, the teenager who took her virginity, becomes a more permanent fixture in the years that follow, as a boss who hires her on at a job where she basically just shows up to look pretty. They do not engage in further sexual exploits, mostly because there seems to be a sense of developing feelings (later, she recants then with this admission: “love appeals to the lowest instincts”). When the growing feelings are halted by his sudden disappearance, sex becomes not only the fallback but also the therapy. And then a married man develops an attachment to her that undermines her sex schedule, which leads to an amazing series of scenes in which he leaves his family and is then visited by the wife and their three sons at Joe’s apartment. Uma Thurman plays the angry wife with such unexpected liveliness that it isn’t simply a performance, but a revelation as well. Who would guess that the same consistent but shrewd star of the “Kill Bill” movies was capable of such lengthy and ambitious verbal outbursts?

Von Trier’s hands twist this material like it were a giant Rubik’s cube; characters discuss, analyze and create elaborate analogies to explain these obsessions, often at the expense of revealing a personality facet of unflattering scope. They are also grounded in the reality of an observant screenplay without a sense of displacement, and actors don’t diminish the portrayals to pornographic fodder, either. So often in movies like this, the players all seem driven by a labored conceit in the plot to arrive at the hardcore images without organic buildup. But “Nymphomaniac: Volume I” is more thoughtful than that. It studies and observes, and doesn’t rush to afterglow. It contains images of immense depth that emerge from pointed cinematography. And It gives harsh sidelong glances to its sexual content, evoking the depressing tone of Stanley Kubrick’s “Eyes Wide Shut.” By the time the sex does arrive, it has become the only feasible reality for many of these people to engage in. The camera does not flinch from their antics, either, and there are moments so graphic and revealing that they even surpass the audacity of the vulgar implications of “Antichrist,” which contained that notorious black-and-white slow motion close-up in which a woman is penetrated in the shower while opera plays over the soundtrack.

In context with most modern filmmakers, von Trier is one of the more fascinating case studies – intriguing not simply because his approach contains traces of Tarkovsky, Truffaut, Kubrick and even Bergman, but also because he is bold enough to stare human suffering directly in its face without any indication of flinching. That is perhaps the rarest of qualities among modern film artists who are more intrigued by technique and payoff, and to see it in his films is to sense the pursuit of total resonance. That approach also goes to the spirit of what the most dedicated of movie enthusiasts pursue in this medium: the opportunity to learn something lasting about others, ourselves, and the shadows we often find ourselves dwelling in. Here are eyes that may have seen more than they will ever let on, but his continued inspiration has nonetheless yielded another effective endeavor in a long list of extremely perceptive character studies wrapped in the framework of high art. “Nymphomaniac: Volume I” is not simply a solid achievement, but a formidable one too.