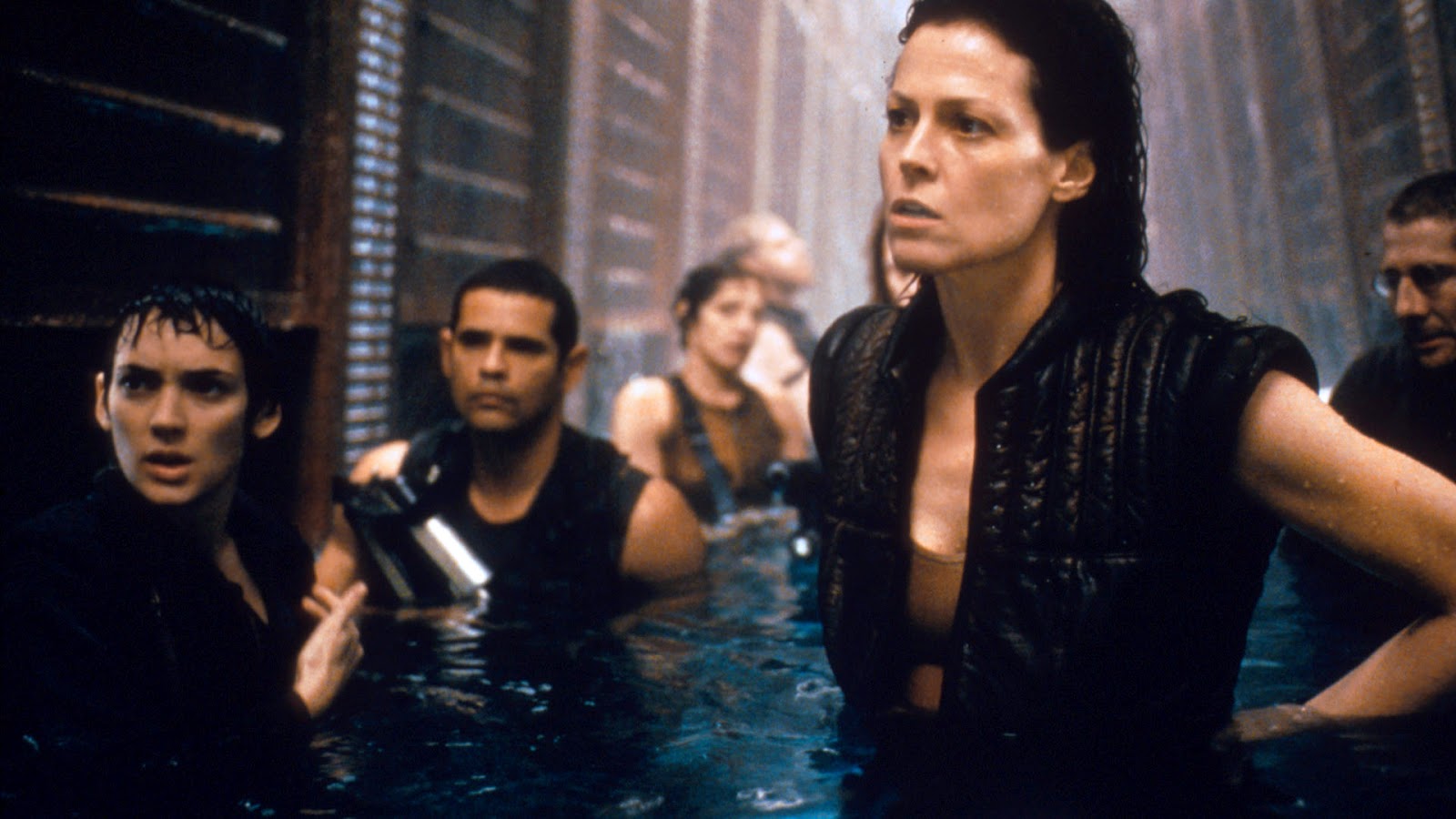 Jean-Pierre Jeunet’s “Alien: Resurrection” is not traditionally viewed as being anything beyond lighthearted science fiction entertainment, but its distinctive and quirky ensemble, clearly inspired by that of Cameron’s in “Aliens,” has had its own reverb effect on more recent team-oriented action films. Contrasting the formula established by three preceding outings in this series, here is a gathering of individuals whose underlying comical sensibilities are not, in fact, defense mechanisms against impending doom; instead, they exist for the sake of adding light to a mood, a sense of cheeky awareness to a tale so clearly saturated in unending bloodshed. When some of them turn up alive (and still gleefully untarnished) by the end of the picture, a critical perception has been shattered: death no longer has to be an inevitable conclusion for all associated with this premise, even though Ripley herself fell to it at the end of the third film (and still many more are killed throughout the running time here). But is that departure in sensibility at all surprising now, so many years later, when the nature of this genre has created the elbow room of added survivors beyond the one token smart guy who lives to become a launching device for sequels?

“Resurrection” marks the fourth (and thus far final) film in the now-legendary “Alien” saga, but the first to have the audacity to step away from its horror-driven formula and plunge head-first into the mischievous core of French art-house cinema. As both a visual feast and an endeavor of narrative spirit, it is saturated in an underlying humor that gives characters and their conflicts distinctive energy, and the director shoots it all without the forlorn seriousness of his franchise counterparts. Many, including hardcore series fans, initially dismissed those sensibilities as cheap ploys: they were seen as last-ditch devices to try and keep the steam going in a series that was on its way to extinction. But to approach the movie out of a context with its director, I think, is to do a disservice to our core instincts to be entertained. That Jeunet was the same man who came to fame from “The City of Lost Children” is a notion that weighs heavily in his sense of style here. This is not a Hollywood space thriller at all, but an intergalactic fantasy driven by the same cheerfully eccentric impulses that have informed a myriad of high-spirited French filmmakers in the last twenty years.

The premise is a stroke of genius, at least on surface considerations. 200 years following the unfortunate demise of Ellen Ripley, samples of her DNA have fallen into the hands of a rebel establishment of scientists in deep space, who are attempting to clone her back to life in order to harvest the creature that was nestled in her chest at the time of her death: the parasitic Xenomorph. When the movie opens, their newest cloning attempt (#8, a tattoo suggests) emerges as a successful venture, and when the alien entity is extracted from inside her abdomen, Ripley – rather unexpectedly, we gather – survives the procedure. That creates two golden opportunities for these fearless doctors (and dual intrigue for us as viewers); while they monitor and experiment on the aliens themselves, they eye the rapid evolution of their surviving host, who not only reaches the functional capacity of an adult rather quickly but also begins remembering details of her former life. Adding fuel to the fire, Ripley has become biologically connected to the alien species as a result of her being their mother; her ability to sense them is indicative of some sort of psychic rapport, and her sense of strength goes beyond normal human function (when blood from her nose splashes the floor and eats away at the hull, there is also the silent acknowledgment that she has inherited as much from their biology as they have taken from hers).

Chaotic antics ensue. A rebel ship of space wanderers, named “The Betty,” arrives on board this floating space station to deliver undisclosed cargo to the scientists. The shipment turns out to be an assortment of human hosts needed to escalate the breeding of the alien species, all of whom are kept in glass cages for visual study. Someone, unfortunately, makes the silly mistake of housing some of them together in the same chambers – not a smart impulse if you consider their instinct (not to mention their biology). Meanwhile, the Betty’s colorful crew of misfits meanders through the grungy corridors of the ship and interact with the mysterious Ripley. Who is she? Why is her strength and endurance so remarkable? The intrigue of others is amplified even further by definitive acknowledgment from Call (Winona Ryder), who appears to know her real identity and exemplifies that knowledge in wide-eyed stares of alarm. Others among her crew volunteer less intrusive responses as a consequence of being masked by silly quirks and snappy one-liners, but as creations from the curious mind of Joss Whedon, this gathering of ruffians offer early glimpses into the ensemble he would later use in his highly admired “Firefly.”

Much of the action follows the same beaten path often travelled by many similar science fiction endeavors of the late 1990s – including the famous “Event Horizon” – but Jeunet directs his material with ambitious distinction while supplying his characters a significant opportunity to engage, interact and respond to the cliché-ridden plot with their own sense of sassy observation. Sigourney Weaver is delightful as the Ripley clone, playing the material with a subdued smirk as if fully occupying the distinction as an all-knowing elder on the outside; because her unending experience with the alien has given her the foresight to understand the inevitability of endless death and mayhem – and Weaver herself has walked many miles in this character’s shoes – she finds comfort as a caustic observer while offering far-sighted wisdom through straightforward dialogue (“She will breed, you will die”). Ron Perlman, meanwhile, does a good job of doing typical Perlman; as the smarmy and sarcastic Johner, his presence fills the screen with all those necessary recessive traits of sexist and ego-driven men, and the women in the film have good fun at pulling him down a few notches. In a respectable gathering of stars, in fact, only Rider seems curiously out of place; her character becomes that all-important bridge between the understanding of Ripley’s identity and the ignorance of her moronic crew members, but Rider plays the material with morose undercurrents, and that completely undercuts the point of Jeunet’s more colorful mood.

Whedon’s own criticism of the movie remains notorious amongst series buffs. Still emerging as a writer within Hollywood at that time, his screenplay for “Alien: Resurrection” was written under the guise of much simpler intentions; after it was placed in the hands of a filmmaker who thought outside of his sensibilities, he felt the end result contradicted the whole point. “It was supposed to be tongue-in-cheek,” he later admitted. “They did it all wrong.” While his proclamations are at odds with the movie’s actual value as fairly relaxed audience entertainment, there are a few moments in the latter half that support those claims. The dialogue delivery in particular seems miscalculated and out of context; in instances where characters are required to offer idle chit-chatter as a means of giving Ripley opportunities to convey sensationalized one-liners, the buildup seems forced and awkward, as if others are knowingly reading from a script page rather than inquiring organically. Because they are so obviously labored, the film’s sense of confidence is eventually undermined, and by the time the aliens have escaped and everyone is in a frenzied race against time to escape certain pain and death, their engagement is no longer just about survival, but about stopping long enough in between chases to point out the obvious and channel amateur comedians.

These quibbles do not inspire the film to completely lose sight of its intentions, though, and the first act builds unending enthusiasm. Though the screenplay’s insights into the moral consequences of cloning are not exactly deep or meaningful, they nonetheless inspire immediate interest in the premise. The cinematographer Darius Khondji shoots the scenes often in low crooked angles that are intriguing, and the production design recalls the claustrophobic nature of the original “Alien” while marrying it to the brown and blue hues that are often a staple of Jeunet’s quirky visuals. The best of the action sequences is one in which the crew is chased into an underwater corridor by a cluster of bloodthirsty aliens; recalling “The Abyss,” it is conveyed with such skillful precision – and striking style – that we are nearly consumed by its silent tension. Though the director became more famous as a dramatic observer as opposed to a choreographer of effective chase sequences, his endeavors here are proof positive that, yes, a career in mainstream Hollywood would have eventually proved to be lucrative for him.

The film’s climactic reveal, in which a Xenomorph gives birth to a creature with human characteristics, remains the most mystifying moment in all of the “Alien” pictures. What were Jeunet, Whedon or any of the visual effects artists hoping to achieve with it? I honestly have no idea, even now. Though the plot twist itself – in which the queen is “gifted” a human reproductive system from Ripley’s own chromosomes – is a spark of genius, the end result is curiously grotesque, and not to any purpose of tension or wonder. The creature that emerges from her womb is so obviously a special effect, furthermore, that it lessens any of the impact of it having human characteristics like teeth and eyes (and let’s not forget that horrific human-like tongue, either). Whatever any of the filmmakers were hoping to convey visually in this moment is lost in a fluster of overzealous final scenes, but perhaps even they were aware of that notion; their mutant concoction is only on screen a total of five minutes, and is quickly disposed of in a moment that begins much like the final reveal in Cameron’s “Aliens” (minus all of the visceral intensity). Oddities and failures aside, “Resurrection” nonetheless goes against the formulaic grain of most fourth installments in established franchises; it takes big risks even while regarding some of them as failures. That it bothers to take on such purpose in the thick of humorous sentiments and colorful self-awareness is also refreshing, and helps to cement the final moment of this series as one of gleeful satisfaction. Ripley has been put through total hell by these destructive predators for multiple lifetimes, but hey, at least she has finally reached the point where she can laugh about it all.

Science Fiction/Horror (US); 1997; Rated R for strong sci-fi violence and gore, some grotesque images, and for language; Running Time: 109 Minutes