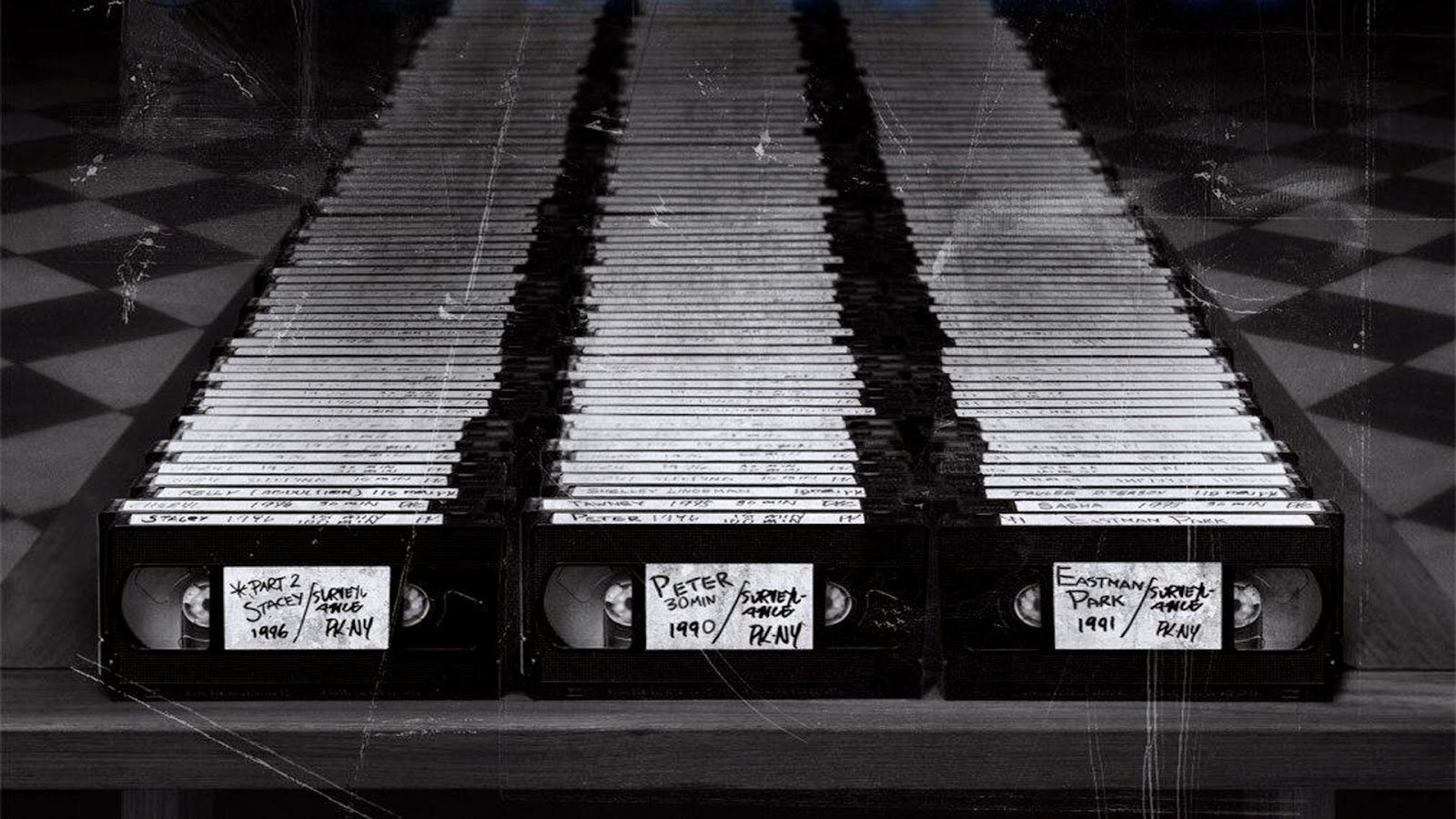 Moviegoers who spend any length of time with “The Poughkeepsie Tapes” are not acting as mere viewers – they are eyewitness to the inner workings of a very loathsome madman. His identity remains a mystery to all those who have followed his trail for the better part of a decade, but their endless search for answers have yielded one of the most haunting discoveries in the history of criminal forensics: hundreds of video tapes in which the actual killer, acting as director, documents his spree of horrific mayhem. When the movie opens, this critical finding also comes equipped with an extensive arsenal of unanswered questions: how did a single human being brutally massacre so many people in upstate New York for such a lengthy period of time without getting caught? Who was he, and what drove his incessant pursuit for blood? And most importantly, what does his depravity reveal now in hindsight after hundreds of hours of footage reveal the nature of his insanity – a horrific portrait of a single person, or our collective ignorance in being able to stop his reign of terror? Just as the camera once served as a window into his menacing tendencies, now it is a confessional for legal authorities and relatives who must bargain with it in some unwavering hope to fathom – and even find peace with – the fallout.

All good serial killer films will follow through with fascinating insights. As far back as Fritz Lang’s “M,” the wild mind of a lunatic has been subjected to a wide array of psychological deconstructions in the hands of curious filmmakers; from Lang to Hitchcock to Demme and Fincher, many have been all too eager to peruse the depths of the most vicious human personifications of evil, more or less as a way of emphasizing the garish possibilities of human nature.  “The Poughkeepsie Tapes,” another entry into the “found footage” subgenre, attempts to decipher that warped reasoning by having us implicitly follow said mind from as near to the inside as possible, and for 96 long minutes the movie screen transitions back and forth between many of his horrific images and its nearest witnesses, all of whom have gathered to discuss the fallout as a means of bargaining with fate for lacking the foresight to thwart such evil. The notion that his identity remains elusive even as these interviews are being conducted is not lost on some of those with insightful testimonies, and when a police officer observes that in the film that the existence of a movie like this will only feed the killer’s undoubtedly massive ego, his point takes on dual connotations.

The climax, I suspect, was more of a ruse on part of the filmmakers to unnerve audiences in a movie theater; because a select few often buy into this technique as more than just stylized fiction – a problem that stretches back to “The Blair Witch Project” – the implication that the source of such vicious killing sprees may be watching on somewhere in a nearby movie theater no doubt would add ominous suggestions to the experience of easily manipulated moviegoers. Unfortunately for the director, John Erick Dowdle, his endeavor never actually made it into wide release; though promoted heavily across most film platforms (I recall seeing the first trailer online in 2007), the movie was never distributed, and fell into that ambiguous vacuum where projects often go to die when studios opt out of releasing them. Now that the movie is starting to circulate in some circles on the Internet (including the Video-on-Demand service), the material is now quickly finding its audience. The problem, alas, is that the found footage subgenre’s recent saturation has essentially negated many of the movie’s more startling revelations, leaving us with a well-staged mockumentary that tries hard to do the material justice, but ultimately emerges as just another sub-standard attempt at pumping up the gore factor of modern horror films without providing it a thematic pulse.

All stories like this at least begin with a puzzling moral dilemma: why do we find interest in a person so eager to end human lives so tragically? Here is one of the more colorful of cinematic depictions, a man who believes completely in what he is doing and sees it through to the absolute final act. The movie argues that he, an anger-driven psychopath known as the “Water Street Butcher,” came to power as a result of lifelong trauma related to personal relationships with others – abusive parents, school bullies, failed interactions with love interests, take your pick. No doubt scarred psychologically by his inability to “be good at something,” his passions seem to emerge when he abducts and then murders a little girl playing in the front yard of her house (there is alarming footage of the crime, too). Because of the euphoric rush his misdeed causes him, many other killings follow – some carefully planned, others more momentary, and nearly all of them horrendous. The screen essentially becomes an unwilling witness to many of these terrible events; there is even a scene where he severs limbs from a woman’s dead body in order to dump pieces of it into different jurisdictions for more difficult identification. Most of the footage, of course, never actually shows a face – because he is also into theatrics, many of these videos involve elaborate masks and disguises, and there is a later scene where he even seems to be performing an execution as if it were a movement in a macabre ballet.

The murders continue, often with bewildering stealth. Bodies scattered across the county are found too late to decipher the accuracy of critical time windows. His M.O. suddenly changes – a contradiction to the serial killer narrative – and prostitutes in the area start turning up dead instead of normal citizens, usually after being brutally attacked and raped (forensic experts suggest necrophilia may be involved). Semen samples collected from each of the victims eventually point towards a cop on the police force, and a speedy trial ends with his unfortunate conviction and death sentence – all of which are carried out on the eve of the discovery of more bodies, and continued killings. Realizing their true culprit has pulled a very shocking fast one on them, the police’s pursuit becomes all the more hardened. And then, in the 11th hour, they make an important discovery: the killer’s hideout, a house in the Poughkeepsie suburbs where hundreds of video tapes are stored in a closet, a dozen or so bodied are buried in the backyard, and a poor female captive, abducted eight years prior, is still alive and forever psychologically destroyed by what he put her through.

Here, alas, is where the movie’s elbows stick out. As interviews with legal authorities – many of them very obviously staged by minor actors trying too hard to belabor their dramatic involvement – begin documenting details and showing us locales involved in the murders, lapses in logic overwhelm the details. How, for instance, is it possible that a killer could successfully bury so many bodies in a backyard devoid of vegetation, where houses on the other side of the street have a direct view into it from upstairs windows? How did in heaven’s name did the mother of the lost teenage girl manage to have a knowing encounter on camera with her daughter’s abductor in broad daylight, and yet never manage to catch sight of his face, or stir from paralyzed horror long enough to thwart his escape? Is any killer capable of completely altering his modus operandi in order to throw others off his scent? And better still, what are the odds that he could spend so many years living in that house and manage to leave behind almost no traces of fingerprints or DNA? The movie thinks too diminutively of human intelligence, even by horror film standards. Sure, the most skilled of such killers are often made so by impeccable intelligence that allows them to escape immediate notice, but little of “The Poughkeepsie Tapes” falls in synch with that philosophy. The material is blatantly far-fetched considering how current it all seems to be.

Why did filmmakers, as far back as the late ‘90s, go the route of putting a camera in the hands of characters caught in the middle of horrific predicaments in the first place? Something about the technique seemed to authenticate their disturbing ideas; because the action was being viewed first person from relatable eyes, it seemed to bring their tragic experiences closer to our own awareness, adding a heightened sense of credibility to the material. In many early increments, the calculated nature of that approach actually yielded halfway amusing endeavors. “The Blair Witch Project” is often scrutinized for its minimalism (not to mention for inspiring this endless fad of subpar mockumentaries), but it was an effective little nail-biter, and remains fairly watchable to this very day. The same can also be said of a few later endeavors, including “Cloverfield,” “Paranormal Activity” and “Quarantine” (also directed by Dowdle). What hopes does such an elaborately staged demystification like “The Poughkeepsie Tapes” have to offer in a medium thoroughly bombarded by the most horrific of human experiences? Moreover, is there any reason for it to be here after seeing the dozens of engaging character studies that have already been made about notorious mass murderers? Ten years ago this all might have been worth some minor notice; now, it comes off as just another run-of-the-mill descent into the underbelly of psychological suffering, and not a very plausible one at that.