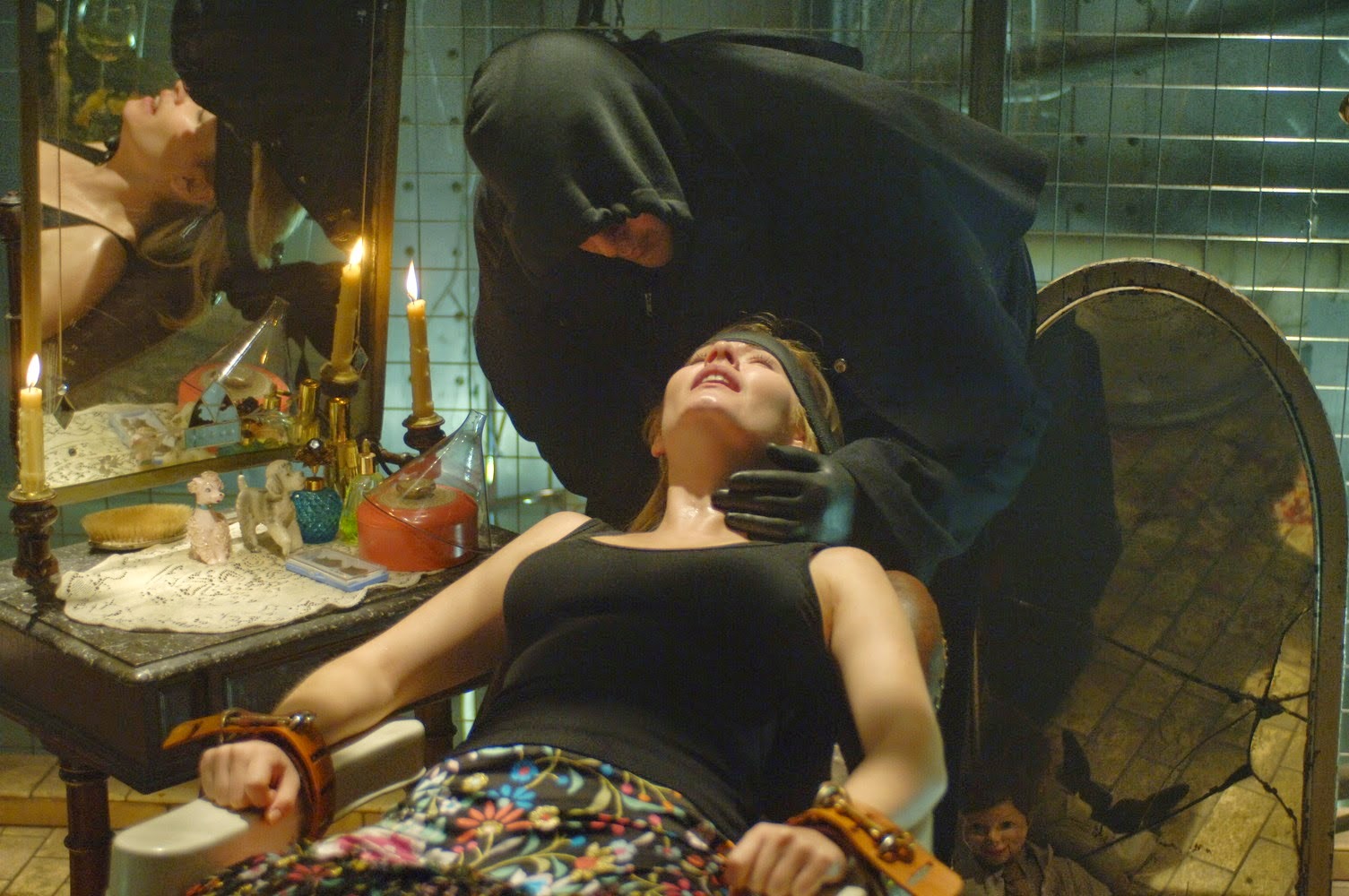 When it comes to the daunting task of dissecting the divisive nature of film genres, no kind is more volatile than the ever-so-audacious horror movie. What is it about the dark nature of the human psyche that fills filmmakers with such polarizing ideas? What is the tipping point at which any idea can lose sight of purpose and exist purely for the sake of senseless violence and mayhem? And moreover, how can the person standing behind a movie camera effectively balance the most lurid of notions with a context that validates their ideas, no matter how graphic? The more abrasive the material, the more difficult it is for someone at the helm to discover meaning. More often than not, it all simply falls into the hands of those who lack the foresight to stay within credible boundaries, or are just too lazy to try. For every effective endeavor that does in fact emerge from this genre, there are usually ten or twenty more of a similar vein that reject the concept of moral purpose. Roland Joffé’s “Captivity,” a despicable film, is the poster child for that latter sensibility.

What a loathsome, reckless and sickening glimpse into madness this is. For 85 minutes of murky exercise, this is a movie that violates every basic moral code ever written about ordinary human interaction, and delivers its endless supply of jolts in such a contemptible manner that we are more or less left feeling depressed by the horror rather than stirred by it. That no one involved even bothers to frame such impulses in any world connected to tangible human awareness makes it all the more depressing, and when the movie has the nerve to show us a close-up of a woman’s face being showered – and mutilated – in acid, all prospects of redemption are abandoned. This is not acceptable behavior, even by the already-mundane standards of its director; while Joffé’s name has more often than not been attached to rather dubious credits (in particular, the horrid remake of “The Scarlet Letter”), he has never made a movie that would suggest he lacks mental stability. The existence of “Captivity” is an unforgivable stain on his resume.

The premise is not so much built of something as it is tossed out in front of the camera like a plate of messy leftovers. The film stars Elisha Cuthbert as Jennifer, a fashion model in some undisclosed locale whose life in the span of just five minutes is about to change from depressingly mundane to depressingly sadistic. We are given a very brief (almost pointless) insight into her daily routine: there are phone calls with agents and friends, and two scenes in which she feeds her pet dog a green smoothie and then some sort of liquid concoction at a dance club (funny, I figured most clubs would prohibit the entry of animals). Unfortunately, when she orders a martini, some shadowy figure seated near the serving tray slips a powder into the glass, and before long Jennifer is disoriented beyond comprehension – a perfect setup when she wanders down an empty hall and is ambushed from behind. When she awakens, she finds herself imprisoned in some kind of underground concrete structure that looks like a decorated loft, where a man torments her with such suspicious behaviors as gassing, unknown injections, and strapping her to a chair while he plays back videos of him torturing and mutilating other women before tormenting her with similar threats around sharp objects.

For the sake of bypassing fallback arguments, let us assume that Joffé is not, in fact, a misogynistic simpleton. That’s too easy a cop-out. What inspires him to discouraging heights in the gratuity department isn’t just about victimizing women; no, an opening sequence (and a subsequent plot development that supplies Jennifer with a neighboring prisoner) suggest that, in this world, murderous tendencies will follow around anyone involved regardless of gender. But what message does he hope to send with the inclusion of such deplorable material as a scene in which the killer feeds Jennifer a smoothie made of leftover body parts? What does it say about the narrow-mindedness of his writers when they reveal the identity of the killer and use the only possibility at context as just a vulgar opportunity to dispose of more victims and continue the mayhem? The movie is a colossal lapse in decency and has absolutely no perspective for any of its reprehensible deeds. And the fact that it wastes no time in getting right to the ensuing bloodshed is as offensive as it is miscalculated; without no prior setup beyond establishing a name and a routine, we never come to see the movie’s primary victim as anything more than just an unfortunate plaything in a sick game of endless depravity.

Some of the decisions implored in this plot are exemplary of the cynicism of humanity. The screenplay was written by Larry Cohen and Joseph Tura, who are not exactly industry pariahs or anything slumming around taking any job they can get; Tura is a relative newbie to film, but Cohen has been at the helm of excellent thrillers like “Phone Booth” and “Cellular.” Either he was hard up for money here, or suffered a drastic setback of sanity in the ensuing years. How else does one justify these exercises in perversion? If the notorious acid shower and blood smoothie scenes are not enough to inspire anger, then consider this whopper of a conflict: in a later scene, Jennifer is tied down and held at gunpoint, while her own hand is chained to a shotgun pointed overhead at her pet dog. The choice: be killed by the man at the other side of the gun, or shoot her dog in order to preserve her life. Who sits around in a story conference and thinks a scenario like this is sound, especially in a movie that warrants no pointed observation in any of the humanity of its protagonists? I pity the day that these writers have to explain themselves when they are hired on to write for something more reputable.

Inevitably all of this endless mayhem will result in a series of scenes in which shocking revelations are made, reveals indicate disturbing agendas and patterns, and the victim catches enough insight to be stirred to the prospect of overcoming her bleak situation. The very idea that “Captivity” affords her this opportunity is almost shocking considering how pessimistic it all comes across. The hints, at least, are there from the moment that she discovers a man being held captive in the cell next to her, and the two of then engage one another in their attempts to escape and overpower the villain, eventually falling into bed together after the foolish guy attempts to play hero for the crying damsel in distress. Yes, because the moment that I am being held against my will and threatened with bodily harm and painful murder, my first instinct is to spread my legs and become a sexual plaything for the nearest human being sharing my space.