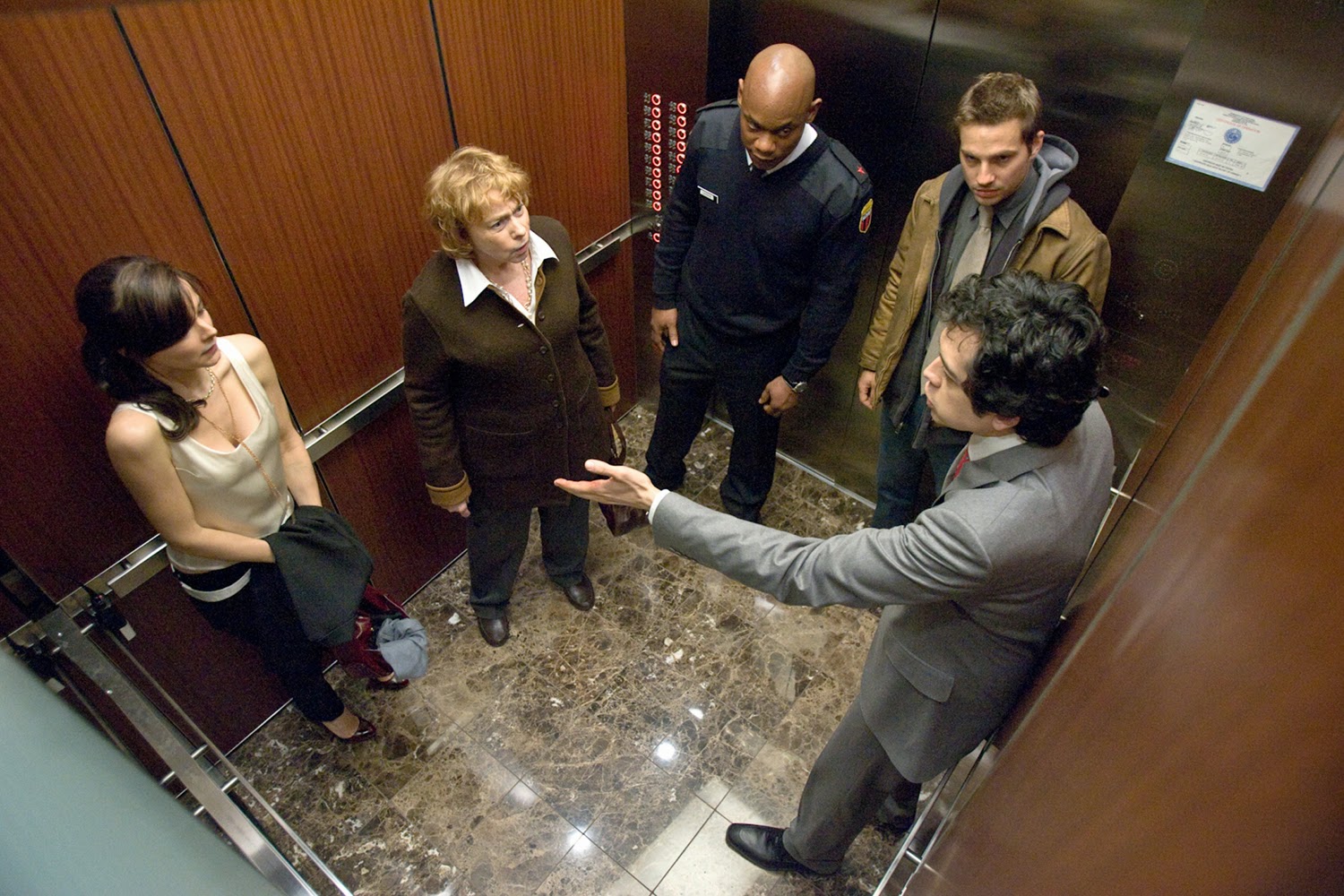 The psychology of “Devil” offers such insightful and probing observations into the nature of evil that there is, at first, a desire to pause in cynical observation: what business does it all have being in a genre with such sensationalized standards? When it comes to the ever-so-exaggerated thrust of the satanic thriller formula, possibilities are usually reduced to over-the-top twaddle or flat-out silliness; there is seldom an inkling in anyone behind a movie camera to approach the subject with sensible faith, much less probing insights. Early narration in this movie is pitched like an audacious antithesis: because a critical observer in the ensuing events believes, wholeheartedly, in the old stories from childhood about the Devil’s looming influence in the world, it informs not only his perspective, but also ours. A good many questionable and horrific things occur to a selection of characters in isolation in just a short span of 80 minutes here – some of it mystifying, some of it disquieting – but none of it treads the line of implausible overkill, and the narrative deals with its horrors as conceivable facets that emerge from the grind of everyday life. And it’s also clever enough to stage the material so that all those involved share a deep-rooted commonality that unites them in their anguish. In one of many important scenes, as a police detective attempts to reason with the events while viewing them through security footage, he is offered prophetic words that seem to contrast his need for logical explanations: “there is a reason we are the audience.”

Our instinct as viewers is to react with dismissal, but skill and craftsmanship are the tools to which a good filmmaker can manufacture promise from cynicism. Try as we might, “Devil” is a movie that defies its namesake: a taut, expert and engrossing thriller with sense of visual restraint that is refreshing in this age of abhorrent overexposure. It left me with real questions that do not have easy answers. And because it finds the immediacy to do so much of this with so few minutes to spare, it only goes to emphasize the ambition of the filmmakers; collectively, they show that they have the willingness to not only stare directly in the face of an overpowering villain, but even accept him as an inevitable piece of the human puzzle. Here is a movie that has the intuition to excite and scare while exploring deep-rooted intrigue about evil’s place in the civilized world.

The movie opens with an ominous warning: a suicide paves the way for his arrival. At the sight of a business high-rise somewhere in Philadelphia, a faceless person plummets several stories onto the roof of a van after crashing through an upstairs window, which is witnessed by none; all those nearby are stuck in the paralysis of a daily routine that turns them into lackluster observers. When the event eventually comes to the attention of the police, they send the observant Detective Bowden (Chris Messina) to investigate. Bowden reconstructs the scene with fathomable precision, even noting that the lack of glass near the death site proves that the van rolled from its original destination. Inevitably, all the steps reveal the exact location of impact to be at the corner of said high-rise, and the detective makes this discovery just as the plot begins to assemble nameless – but heavily emphasized – faces in the lobby of this same precise location.

Five people, seemingly unrelated, sign in at the front desk and disappear into nearby halls. When one of the desk guards plods off towards an elevator, they all converge in a moment that seems, at first, like a mere accident. As the elevator doors close, it dies mid-way into its ascent. Building security is unable to locate the source of the problem – is it electrical, or mechanical? As they rush to restore power to the elevator, the five trapped people begin to restlessly exchange snarky comments and facetious platitudes. One of them claims to be claustrophobic. Another, a mattress salesman, is looked at disapprovingly; his sleazy undertones do not entice the others, even though their impatience is just as obvious. Meanwhile, their mid-air detention is watched closely through security cameras by two guards, who offer reassuring promises over the intercom of the elevator being fixed in very short time.

Alas, alarming progressions of unexplainable events begin to overtake them. The lights flicker out, and strange noises fill the darkness: whooshes, gasps, and random shuffling. The youngest of the prisoners, Sara (Bohana Novakovic), emerges in the light with an open wound on her back (“it feels like something bit me!”), and others note the blood stains on the mattress salesman’s dress jacket. During the next black-out, other noises are interrupted by screams and the sound of crashing glass; when light is restored, their questionable suspect is found dead in the corner, with a shard of glass stuck in his jugular. The screenplay intensifies the mystery by insinuating that no culprit is obvious to any of the remaining survivors; no, not even to Detective Bowden, who is summoned up to the security room in order to observe the strange (and fatal) events as they begin to transpire. Then there is a more critical turn in the underlying approach: when the blurry sight of a demonic face is caught in a still image of the security footage and is seen by a superstitious security guard (Jacob Vargas), his intuition offers a new consideration: that the Devil himself is actually inside that elevator, slowly devouring the souls of those that share his space.

Why, if that were the real explanation, would Satan be after such a random assemblage of strangers? Maybe they were never so random in the first place. In that regard, the movie utilizes a narrative ploy made famous by the first “Saw” vehicle; by suggesting that everyone present in the events is bound by questionable character flaws or immense tragedies, it offers new layers of consideration even while the uncertainty of a source remains pertinent in the mind of the audience. But the movie does not indulge in the perverse allure of these implications, either; despite the dark and grizzly path that is preordained for these characters, we are not forced into the ruckus of gratuitous images or endless pools of blood. The PG-13 rating that comes attached to the movie is not only refreshing, but indicative of a lost art for the consciousness of ideas over visuals. At the point of our existence where horror movies are often lurid fantasies instead of sensible considerations, “Devil” contemplates every step it takes, and refuses to wander beyond the sphere of artistic reasoning.

The movie was directed by John E. Dawdle and written by Brian Nelson, two emerging talents who have taken a thought-provoking premise penned by M. Night Shyamalan and turned it into one hell of a good time. It’s not as if their strong resumes could have hurt matters, either; Nelson wrote both “Hard Candy” and “30 Days of Night” – two of the best of recent thrillers – and Dawdle has directed a handful of fairly distinctive pictures (including three “found footage” horror films: “The Poughkeepsie Tapes,” “Quarantine” and the recent “As Above, So Below”). Together, their synergy inspires creative and technical sparks that announce them as guiding forces in the ongoing evolution of this genre; Nelson is careful to observe his story from the inside without removing emphasis from characters, and his vision is brought to life by a director who shoots the material in steep camera angles, as if watching critical events from beyond the realm of the living. What they have created together in “Devil” is a movie that accomplishes exactly what it sets out to do, and more: namely, tango with a vivid representation of evil while suggesting, without shame, that the forces guiding the actions of these characters are more than just the stuff of superficial horror film plot devices.

Horror/Thriller (US); 2010; Rated PG-13 for violence and disturbing images, thematic material and some language including sexual references; Running Time: 80 Minutes