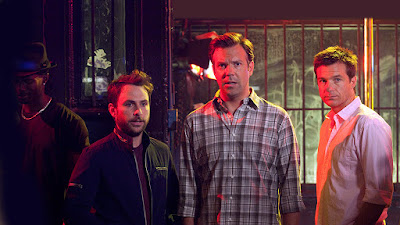 “Horrible Bosses” begins with a smart premise about a group of friends exacting revenge on a slew of corrupt professional supervisors, and then slowly but gradually descends into the meandering embrace of excess, stupidity and tragic comic timing. By this point, you recognize the trend more than you should: it has almost become customary in movies like this for friends who are down on their luck to get involved in some kind of conflict that causes them to react with eccentric flair (not to mention dialogue that could be uttered by any simpleton standing in line at a convenience store). What provokes filmmakers to still find those generic quirks amusing is its own issue – but why did actors like Jason Bateman, Colin Farrell and Kevin Spacey, so clearly in a league of their own, agree to partake in such a shoddy exercise of those qualities? Did story conferences leave anyone optimistic that they were dealing with material that was funny, or did they just assume that the charisma of their co-stars would be enough to offset the reality that the jokes were trying way too hard?

There is one genuine laugh in the picture. One – that’s all. It comes in a moment of fantasy that is a staple of movies about fed-up workforce employees: an unlikable boss makes an announcement that ultimately affects the trajectory of his team, and a character’s mind shifts to a moment where they envision doing something horrible to their superior, usually causing death or pain.  The situation involves Nick Hendricks (Bateman), who has consistently vied for a promotion to vice president at a firm run by a passive aggressive Dave Harken (Spacey); when he and his co-workers are summoned to a board meeting in which the promotion is to be announced, they are collectively baffled by his decision to completely absorb the job himself (as well as take 85 percent of the position’s salary ontop of his own), effectively snubbing all those who competed for it. Hendricks’ daydream is one of ambitious violence and celebratory outcomes, but of course it is; this is a man who makes it known in countless intervals that he is the mean-spirited pig, and such comeuppance is validated in the eyes of the audience. The effect of the fantasy is so well-timed with the moment that precedes it that we are genuinely impressed, and left hopeful for the remainder of the duration.

But nothing more comes other than occasional smirks or mangled expressions of confusion. Like rats in a collapsed maze, these are characters struggling hard to find a path to comedic freedom, and are constantly getting lost in the ruins of an absurd plot. The three friends are Nick (Bateman), Kurt (Jason Sudeikis) and Dale (Charlie Day), each of whom has become united in their sentiment that their work lives are dominated by complete and utter disgust in their bosses. Nick’s manager (the Spacey character) is perhaps the most vindictive of the three; his challenging demeanor suggests the most extreme of control freaks, and there is an exchange between he and his fed up underling in which he promises to ruin him in the industry if he were to quit outright. Kurt, meanwhile, is disheartened by the sudden death of a dear boss Jack (Donald Sutherland) and equally disturbed by the appointment of Jack’s son Bobby (Colin Farrell), a smarmy dope who spends most of his time hooking up with women, doing lines of coke in the main office and having very loud bowel movements in the nearby restroom. And poor Dale, ready to marry and settle down with his loving fiancée, is experiencing major sexual harassment from his female boss (Jennifer Aniston) at the dentist’s office; she vows to bed him before his marriage takes off, and has concocted an elaborate blackmail plot if he doesn’t follow through with sating her sexual appetite.

All of these dubious scenarios come to a head in a suggestion made by a seedy hitman-type character (Jamie Foxx) they meet in the bad part of town, who for a price suggests that they do away with each other’s bosses for one another to spare them the possibility of obvious suspicion (Hitchock’s “Strangers on a Train” is referenced in this scene, I suspect, to make the characters look smarter than they actually are). When they decide to break into the houses of each of them to gather information, a cellphone from one place is inadvertently left behind at another, which muddies the waters of their scheme; when one boss winds up dead at the hands of the other, they chicken out on following through with their own menacing plans and instead turn their attention to escaping the notice of suspicious police officers. And somewhere in the midst of these dangerous mix-ups and close calls are silly exchanges involving cocaine, sticking toothbrushes up one’s butt, peanut allergies, bantering with an opinionated GPS system and peeing on school playgrounds. And if that isn’t enough to inspire the audience to amusement, there are a lot of shots of Jennifer Aniston walking around in lingerie, too, just for good measure.

Sparse jokes aside, take a moment to contemplate the implausibility of some of these characters. Aniston in particular is a sore stick-out; here is a woman running her own dental practice, which implies that she has done extensive medical training and post-graduate work in order to achieve her place in the workforce. No woman in any reality would be so desperate as to hit on everything that moves, and certainly not be so stupid as to prance around in her own office wearing nothing but a lab coat and panties. Who wastes all that time just to become a nymphomaniac? Furthermore, would a man as seemingly accomplished as the Spacey character really bother getting himself involved in an elaborate chase sequence that will inevitably conclude with death threats at the end of a pistol? By the most absurd of fantasy standards, “Horrible Bosses” creates realities that feel like ridiculous gimmicks out of some kind of Saturday night parody.

Where did it go wrong? The screenplay certainly shows signs of ambition, but I wonder if the fault, as it is in most films of this nature, is allowing so many people to influence the writing. Three young scribes penned this whacko story, and if it is true that certain humors are dissonant with others, then it’s no wonder that the movie feels so out of step with plausibility. There is no sense of primary intent, and no modulation in between to stage the punchlines; it’s like watching a clash of egos that have wrongful assumptions about what kind of jokes this material deserves. Many a scene exemplifies this trend, but one of the more obvious examples occurs during a stakeout of the Spacey character’s house. Nick and Kurt leave Dale in a nearby car to be the lookout while they break into his mansion and snoop around, and he inadvertently winds up awkwardly responding to an allergic reaction with a medical syringe. The intention is screwball, but the delivery is uncertain. Are we supposed to feign shock, or laugh, or just shake our head in boredom?

The director is Seth Gordon, who has done a couple of film comedies and a slew of television in his 10+ year stint as a filmmaker. He cannot be entirely faulted for the failure of his screenplay, but one wonders what appeal he saw in even bothering. This is, after all, the same man who once made “The King of Kong: A Fist Full of Quarters,” one of the most charming little documentaries ever made about the culture of arcade gaming. Was there a point in which he jumped the gamut and started taking all the odd jobs he could find? Or does he really find the material in front of him – even something as lame as this – funny? “Horrible Bosses” provides no insight into answering that question, but it does suggest other possibilities. The world around us grows darker with each new terrible tragedy, and interesting escapism gives us the chance to remind ourselves of simpler values. If laughter can be the best medicine, here is a movie that might as well join the ranks of the illness.