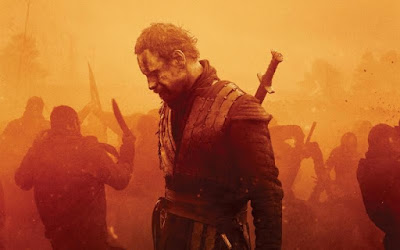 Shakespeare’s grim and challenging “Macbeth” is not a story for the easily rattled, and rare is the movie adaptation that is able to comprehend the depth of those principles in the language of thoughtful cinema. Greater interpretations of his work don’t bother conforming to narrowly defined purposes, but they are often elusive; for many, the bard’s paradoxical implications are told in a custom that violates the quintessential structure of movie narrative, and thus present obstacles too great to overcome. Those who have become fluent in his teachings have somehow grappled those boundaries into an arsenal of bendable values, and on occasion we will even encounter a retelling that rises above those conventions (two of the more recent are Julie Taymor’s “Titus” and Branagh’s “Hamlet,” easily the benchmark). But if they are the byproduct of years upon years of intense research and careful comprehension, then that club must now welcome Justin Kurzel, who has not made a great film about the Scottish king but has essentially crafted the defining interpretation of his long and horrifying descent into madness, and done it with production wizards that perceive the details through a texture of grand artistic value.

The first of many evocative opening images, shot entirely on the Isle of Skye, establish that certainty. We first see the figure of a stout and young Macbeth (Michael Fassbender) staggering towards a raised platform of rocks, where the body of a young infant rests. This is the deceased heir to his name, and the grief-stricken gazes of he and Lady Macbeth (Marion Cotillard) are of a lost quality; to them, a funeral pyre is like an act of universal defiance against their souls. The movie reflects this in a series of cut-aways featuring the immense rolling hills of the landscape, which seem like menacing prisons holding them in. Routinely the camera will even revisit them in order to anchor the ensuing events, but they aren’t always direct visualizations; some of them are seen with strategic color desaturation, others with skies that appear as if made of running blood. What they create is a setting of wide-open anarchy that embellishes the material to one of silent urgency, and how distinct is it for any film based on Shakespeare’s material to frame the tragic context in an illusion that matches the austerity.

he death of their child – a new detail to the story – drives the undercurrent of events with intriguing perspective. Macbeth, a decorated and valued general in the Scottish army, has just proven triumphant in a bloody battle against rebels threatening the crown of King Duncan (David Thewlis) when he is ominously visited by a series of strange women. Their words are puzzling and yet prophetic; at first branded with the title of Thane of Cawdor, they go on to say that he will also ascend to the role of monarch, completely out of synch with any of his muted expectations. The reaction is one of implicit wonder, but when it is followed by his sudden appointment to the former title, it inspires menacing considerations. His wife, torn between grief and opportunism, believes the omen is a gateway to agendas they must answer the call of, and soon both husband and wife become united in a plot to assassinate their trusted leader, hopefully before he names his son Malcolm (Jack Reynor) as rightful successor to the throne.

What is it about the role of King that fills Macbeth with such senseless bloodlust? Shakespeare’s material pigeonholes the implication as one of outright greed, but this screenplay, penned by three writers, opts to consider the possibilities in the fringes of moral gray areas that feel decidedly modern. If the death of their child sent them into paralyzing grief that clouded their judgment, then it is little wonder that the act of murder itself will inevitably inspire greater psychological collapse. There are few details left to the imagination over the course of this brutal, violent 113 minutes; violating the essence of the bard to have his most deprived events occur off-stage, there are gory battle scenes, murders and burnings aplenty here that are brought to disquieting life, sometimes very frontally. But none of them are done for surface effect, either; they come from a focus of mental cues that the actors are fully absorbed by. When the moment arrives for Macbeth to undertake the dubious task of murdering his leader while he sleeps, for example, the scenes have such a suggestive punch that they seem more real than just elaborate technical endeavors. And that’s only the first of several key deaths that it inevitable in this very troubling tale.

The details of the plot are known far too widely to require recaps. For the most dedicated of William’s followers, they have gone past being story points and been accepted as instinctual movements. What will surprise them – as it did me – is just how vibrant and intense this ambitious presentation is, as if a lost morsel of enthusiasm buried somewhere in the old texts has been sparked to new visual eruption by those pulling the technical strings. The cinematographer Adam Arkapaw, who has thus far been mostly known for short films, is the biggest of revelations; his camera moves with such sobering conviction in the throes of this violent material that it feels invasive, almost predatory, to the actions of others. Just as stylized as his shots are in the wide open spaces of the Scottish hills, there is a certain paralyzing claustrophobia to the interior scenes. Consider a sequence in which Macbeth, already crowned king, is addressing a court full of dead-eyed observers and is visited enigmatically by the ghost of his murdered friend Banquo. There is no grandiose attempt to light the scenes excessively or drown out the rude luxuries with musical prompts, and Macbeth’s shaky soliloquy has a deafening impact against the stillness of the scene. That Kurzel, a perceptive filmmaker, opts to frame the moment with such simple objectives implies that he is reaching to the core of the meaning, and only calling attention to the visuals as a way of reminding us just how deep these characters have gone into the wicked indulgence of their nightmare.

Fassbender is one of the most treasured of discoveries in recent cinema, and as the insane Macbeth he exemplifies the golden standard of the great Shakespearean movie thespians. Who else other than a man possessing such a hard-worn expression of intensity is capable of mirroring the sentiments of this story, or bringing them to the surface? His is a technique that commands the words into a force of psychological penetration, and there is no single moment in which he wavers from the intensity of that objective. Likewise, the regal Cotillard – who reportedly saw the role of Lady Macbeth as a dream performance – does something incredibly unique with the portrayal: she manages to give it a sincere edge. How that is possible beyond the more abrasive intentions of the characterization is strange and baffling, but it is an effective decision; she is the personification of complex deviance. And of the very talented ensemble of supporting players, Sean Harris does an extraordinary job of balancing determination with spite as the wounded Macduff, and Reynor’s Malcolm is alert and nervous without being a soppy bystander in the affairs of his vengeful usurper.

The union of their endeavors and those of the technical artists come to head brilliantly in one of the great climaxes of the written word. As the walls close in around Macbeth and his misdeeds, both he and Macduff, seeking revenge for the cruel murder of his family, engage one another in a verbal contest that culminates exactly as it must: with the hand of justice swinging firmly and swiftly against the one who has unleashed so much havoc on the kingdom he was sworn to uphold. Regardless of intention, presentation or added theoretical perspectives, the message of this story has remained the same across the centuries: he who is born to undo the legacies of others is cursed to swim in the blood of his own misfortune. But how often has it been conveyed so beautifully, or with such stark visual suggestions? The final scene, cloaked in shades of red and orange as a body is propped atop a hill, is a literal work of art. What would have been the bard’s reaction in seeing such moments conveyed with such pictorial merit? Had he lived in these times, would the work of the director mirror his sentiments, or would he have been torn by the implication that his core thesis would inevitably go beyond mere suggestion? This new “Macbeth” may not rest comfortably with purists, and it may even elicit disdain from those who prefer more pragmatic interpretations. It is violent, bloody and deliberately decadent. But it is also as exciting and dramatic as any adaptation on film has come, and if that alone inspires dialogue, then the meaning of the work lives on exactly as it means to: with staggering ferocity.

I couldn't disagree more. This adaptation was all style and no substance. Whispered, poorly enunciated lines delivered monotonously for two hours are not examples of acting, or even compelling narration. It's clear this reviewer has little understanding of the source material, as did the creators of this film.

I agree completely with this review: eloquent, insightful analysis that understands both Shakespeare and what this film adaptation does well.
What a pleasure to watch these actors and the stunning cinematography capture the essence of this tragedy so memorably.
The acting is indeed intense and always compelling, even with some uneven accents and rhythms. That the audience feels sympathy for Macbeth and his wife is one of Shakespeare's feats in this brutal tale, and this director subtly explores that thread of psychological realism. The tragic hero's fall must be from great heights, and this film makes us groan and gasp as we witness each step of the horrific descent.
It's also quite a triumph to sustain suspense in such a familiar story, yet somehow this movie breathes such life into the words that I found myself holding my breath during several tense scenes.
This inspired director combines the grand scope and power of cinematic settings with the intimacy and emotional intensity of live theatre. How does a film adaptation of literature get better than this?
This Macbeth is a subtle and intelligent film that should thrill both Shakespearean experts as well as all the high school students who study this play.
Enjoy!