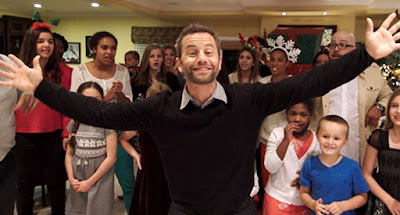 He begins his diatribe as most do in the precursors to holiday yarns: seated at the front of a crackling fire, a Christmas tree in the backdrop and stockings hanging from an elaborate mantle façade. His smug, unsavory smile cloaks a disgust for inclusive perspectives, and his words – clearly improvised – rattle on about the contemptuous nature of differing opinions. No, these are not the joyful invites into a world of good cheer and worldly connections; they are the damning indictment against any person in the audience who has ever shared a more broad view of the holiday meaning, especially one that includes considering anything beyond fundamental Christian values. If these warnings had come from anyone less devoted to the cause than Kirk Cameron, we might have just assumed innocence, or even irony. But knowing that they belong to this, a self-proclaimed authority of the teachings of Christ, is to find oneself trapped in the embrace of a self-indulgent ideology. The concept itself would be dimwitted if it weren’t so dangerous.

They are, nonetheless, the driving force of one man’s strange and hypocritical philosophy, and “Saving Christmas,” the worst holiday movie ever made, brings them to unison in an elaborate show of baffling nonsense. Perhaps it’s no surprise the movie was made entirely out of the studio system, either; who would have the gall to support it, especially considering how divisive and narrow the vision of the subject matter was? Yet like a train wreck that simply refused to stall on the tracks, the movie thrived on the fringes of obscurity, and even found wide release after a very exhausting campaign to be picked up by major theater chains. A year after it bombed catastrophically, it lives on in certain infamy, playing less like a motion picture and more like a filmed exercise of delusions, fantasy and fiery rhetoric that insists religious victimization runs rampant, and there is no greater threat to the faith of Christ than those who choose to question details in their most treasured holiday.

We can go on for hours about the strange paradox of those statements – and many certainly have – but let us, first, consider the product in front of us. It’s a travesty. No, not just in the sense that it is made with radical motives; there is literally no single moment, line of dialogue or camera shot that inspires wonder, excitement or even general interest in plot or characters. Home movies made by manic photographers possess more coherence. There is even a moment during the last ten minutes so lazy that it doesn’t even bother with proper editing or staging techniques; the cameras are set up on tripods, and the characters engage in a dance montage where a familiar Christmas song is set to the beat of electronic dance pulses. Why is it there? If Cameron and his director, the severely misguided Darren Doane, are working from the example of more ambitious holiday comedies, they perceive it as some sort of narrative ritual, a moment that is supposed to tie everything neatly together for the sake of positive finality. But there is no choreography or pattern to any of the ridiculous dance moves, and like the scenes that come before, it only plays up everyone’s disturbing lack of preparation. I have seen failed talent auditions on reality shows that are far less tragic.

That’s not even the most disturbing offense. The razor-thin plot involves Kirk (Kirk Cameron) celebrating an ambitious Christmas party with his close friends and relatives, where he placidly celebrates the many virtues of his favorite holiday, including the taste of hot chocolate and the sight of happy kids seated on Santa’s lap. When it comes to notice that his sister’s husband Christan (Doane) is missing in action from the celebration, it comes with a reveal that concerns cheery Kirt: “He’s just not into Christmas this year, that’s all.” When he discovers the dejected pessimist seated behind the wheel of his vehicle in order escape the joyous festivities going on inside, the movie launches into a long and exhausting exchange between them both, in which one runs through a list of all the Christmas inaccuracies that anger him, and the other attempts to reason with him by, basically, suggesting that his negativity is a hindrance on everyone else, and that he lacks understanding about some of the greatest specifics of the Christmas spirit because he doesn’t look “deep enough.”
Some of these explanations, meandering and unfocused, would be big hits for authors of fairy tales. T

The greatest stick-out involves a baffling justification of why Christians utilize a tree as such a prominent holiday symbol. Is it because they stole the idea from the Pagans? And wasn’t the concept of gifts under the tree taken from the Druids? According to Cameron’s logic, the tree is important because 1) it was already in the Garden of Eden, and 2) Christ died on a cross made of wood – an instant connection! Some random mumbo-jumbo about how his death neutralized humanity’s destiny to die somehow translates to the notion that we use the tree to remember his sacrifice underlines that detail, but of course there is no clear-cut framework for him to supply that explanation. Why bother? When you are a man angry at the world for attacking your religious freedom, are you going to care all that much about history or science failing to back you up? Better yet, are you even thorough enough to study or challenge it?

This would be easy to dismiss as silly or inconsequential if the intention wasn’t so blatantly irresponsible. We often hold our younger generations to a suggestion that their intelligence is circumvented by improper education – especially in the age of the internet, when anyone can taint the waters of truth – and here is a man so utterly intoxicated by his devotion that he is audacious enough to supply rationalizations that lack basic research. To him, God trumps history and logic. Simultaneously, “Saving Christmas” implies that the most devoted of Christian followers are dumb enough to blindly accept those words as gospel, and shame must fall on them for offering dissent. That makes the movie just as cynical as it is anti-intellectual. More optimistic spins would leave the questions of faith and reality in the hands of their audience, but there is no wiggle room here; if you don’t accept the inevitability of “looking deeper” and seeing the actuality of these claims, you are contradicting the perspective, and therefore unworthy of drinking hot chocolate or wearing Santa hats.

Years upon years of human awareness have given each of us the virtue of compassion, and good holiday movies reflect those values; they are not judgments or indictments against opposition, and often encompass the universal appeal of goodwill, regardless of religion or denomination. They tell very good stories, too. Many of us are thankful to be part of the golden age of those sensibilities, and great movies like “A Christmas Story” are the embodiment of that sentiment. Sometimes there is a humble sincerity to the concept of belief (“The Polar Express”), at others lightweight fanfare (“Home Alone”). What would any of those hopeful audiences think if they sat down to absorb “Saving Christmas?” Would they enjoy the judgment? Would they find any of the dialogue funny or insightful? Would they legitimately accept Cameron’s theories as truth, or would they become lost in the twisty labyrinth of his ridiculous thought process? This isn’t just a very bad movie, it’s an assault against the nature of film to inspire, provoke and entertain. Those involved should be ashamed of themselves for abusing the medium.