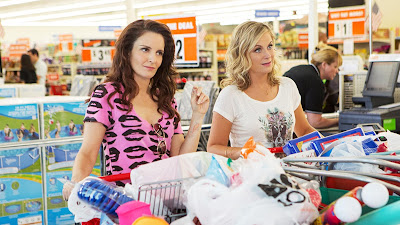 Siblings are frequently at each other’s throats in the premises of mainstream adult comedies, but when you cast Tina Fey and Amy Poehler in the roles, it’s almost impossible to bow to those conventional pressures; they are too likable to be seen in any capacity beyond lighthearted antics. That’s exactly what one can come to expect of “Sisters,” their newest film, which tells the story of a pair of 30-something women – one slutty and irresponsible, the other accomplished and pathetic – who are asked to unite in order say goodbye to a lifetime’s worth of old memories, and wind up creating a slew of chaotic new ones in the process at their childhood home. Because their individual – and mutual – dexterity is so well-known, one could hardly expect anything less. That is just as much of a routine as it is a platform for wild and crazy gags, of course, but the virtue of theirs is that they bring a certain infectious edge to the table, inspiring just as many smiles as chuckles. They are also consistently funny without forcing the attempt, and nearly every moment that they are on screen is one of blissful delight.

“Sisters” is a movie written entirely with exterior emphasis, where a screenplay is assembled out of baseline expectations and then the actors – in this case two very successful television humorists – are given the weight of formulating a payoff tailor-made to their audience. The good news is that they are fully capable of doing exactly just that; the film, a lengthy excursion into crude humor and embarrassing sight gags, does provide an ample supply of laughs. The drawback is that it doesn’t really go for walking any high tightrope, and insists that the abilities of its gifted performers be boxed into a specific set of opportunities that are neither deep nor resonating beyond the momentary impulse. This isn’t an uproarious romp through the minds of capable enthusiasts, but it is funny, sweet and good-natured, and in the age where studios attempt to pass off travesties like “The Interview” as good examples of buddy comedy, how thankful we remain to laugh at all, even in the simplest contexts.

The premise involves Maura (Poehler), a relatively successful but secluded nurse from Florida, who frequently Skypes with her parents Bucky (James Brolin) and Deana (Dianne Wiest) and discovers in the opening scenes that they have decided to sell the family house and move into a retirement community. This creates an intriguing scenario in which she and her sister Kate (Fey) are asked to come home and go through all of their things in order to figure out what they will salvage; because the house is already in escrow with eager buyers, they are working with limited windows of time, and must clear out a shared bedroom that looks like it was frozen in time. Unfortunately, because they seldom see one another (Kate is a hairdresser consistently bouncing around with living arrangements and jobs), their tasks inspires a torrent of old memories from discussions and readings of old diaries; through them, we learn that Kate was very much a slut, and Maura was too awkward to even get a date. Something about the joyous implication of their childhood creates new enthusiasm, and before long they decide to use the vacated house to throw one last shindig involving all of their old high school chums, hopefully so that Maura can get lucky with an attractive neighbor (Ike Barinholtz) and Kate can learn to be the responsible adult, especially as she becomes further estranged from her own teenage daughter.

There is a vicious cycle of situations that consistently put them in the most embarrassing of scenarios. One of the significant running gags involves the exclusion of Brinda (Maya Rudolph), an old rival from high school who is purposely not invited to the party but gatecrashes it anyway, setting the story up for a repeating gag in which she is thrown out and then decides to exact revenge in some elaborate way. Meanwhile, an assortment of adult peers, now settled into the comforts of maturity, are encouraged to let their guard down and become carefree teenagers again, a notion that inspires a loud party full of booze, drugs and property damage, and a class clown named Alex (Bobby Moynihan) who has an adverse reaction to cocaine and becomes a living cartoon. That the movie continues to build such scenarios under the silent assumption that major problems await them after their parents discover the condition of the house give the jokes an added level of anxious urgency, and many of the laughs they inspire are nervous; the girls may be having some whacky fun in the moment, but to what avail can we expect all things to resolve when so much bad is going on?

Some of the jokes are precious. Consider this as a contender: when both sisters are driving down the street of their parents’ home, they stop at the sight of a new neighbor’s house and engage in some innocent flirtation. In truth, it is an opportunity for Kate (the Tina Fey character) to get her sister to come out of her sexual shell. Unfortunately, Poehler’s dialogue meanders so far from the flirtatious intention that it becomes hilariously awkward, and the neighbor’s priceless expressions anchor the sentiment. Later still, when they both wind up sharing space in an attic during the house party while smoking marijuana, they create a charming energy while attempting (unsuccessfully) to avoid falling through the rafters. Other notable laughs: a strange moment when both daughters barge in on their parents, who attempt to hide the fact that they were having sex; a scene in which a drug dealer played by John Cena rattles off a long list of buying selections while remaining stone-faced through the whole delivery; and a moment towards the climax when the pool in the backyard falls into a large sink hole, long after the premises has been inundated by broken windows, destroyed walls and ceilings and blue paint being poured into the yard’s sprinkler system.

The trick to all of this is in the timing, but the plot, somewhat inspired by “Animal House” (and to a much lesser degree, “Porkys”) lumbers the jokes along as if to suggest a depth that it is not capable of delivering. The director, Jason Moore, was probably hired to facilitate that notion; in order for any of it to work, it depends on selling the chemistry of its lead actresses, who are quintessential in allowing the material to rise above the confines of the situation. But as he is doing it, he and his writer Paula Pell don’t reach too deep into the possibilities of the premise, because there is no desire. This is a surface movie, a clothesline of situations meant to hold up the comic laundry of both of these women. Would it have been possible to make any audience care about these characters, or was there no possibility of seeing them as anything other than fictional projections of established personalities? A different intention might have provided smarter outcomes.

I can’t imagine many emphasizing the movie beyond momentary remembrances as time marches on. Both Fey and Poehler have amassed the kind of reputation that makes many of their specific endeavors seem like blips on a radar of unending engagement, and film often suffers the consequences of that. Who, for instance, even remembers their vehicle “Baby Mama?” Many have jumped on the bandwagon of their comedic partnership, but more often than not they care about moments rather than full-fledged endeavors, because what they do does not fit the mold of any specific medium. In many respects, some of the jokes in “Sisters” will rightfully join the ranks of many of their most treasured when it comes to recalling their chemistry. But who will care that there was a plot here, who the supporting players were or what kind of crazy antics went on in that big expensive house? They are all elaborate setups with no isolated payoff. The movie serves its purpose well and does exactly what is intended – which is to further the argument that these women are a phenomenal gift to the world of comedy – but when you get right down to the possibilities of an full movie, it is a just as lengthy and innocuous as any of the recent endeavors involving the partnerships of likable comedians. We laugh a lot, but are content to move along just as quickly as we arrive.