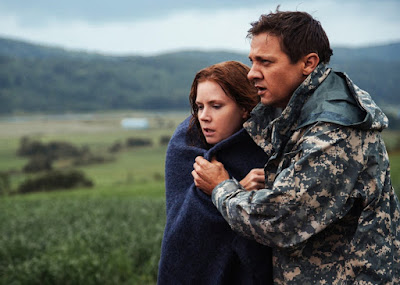 In times when audiences are trained to be enamored by special effects and simplified narrative patterns, “Arrival” is an unusual discovery: a movie that requires us to think beyond the polished surface and contemplate our own place in the universe. While stories revolved around this theme have been exercised abundantly in the science fiction medium over the years, usually they have been to the service of gratifying the momentary senses rather than stimulating the recesses of the human brain. But those paying very close attention to what is occurring within the frames of Denis Villeneuve’s new endeavor will not be walking away with basic assumptions or criticisms – they will be too occupied by the underlying philosophies that have inflicted their thought process, all brought to the surface by perceptive dialogue and a free-form plot structure that considers the very concept of space and time. Minds like Stanley Kubrick and Steven Spielberg knew we were starved for the discovery of deeper meanings in the milieu of dazzling images, but now the movies find themselves leaping audaciously past the domain of earthly assurances to penetrate the membrane of the very cosmos we pass energy through.

The primary challenge is to discover that in a film that doesn’t call attention to sensationalistic action or overzealous plot movement, yet moves assuredly to keep a mind engaged in all the necessary angles. “Arrival” works because it balances skillfully on the razor’s edge of those benchmarks, and then involves characters whose personal stakes seem like extensions of our own. The star is Amy Adams, who plays a college linguist named Louise Banks apparently undergoing a silent personal tragedy: namely, the death of her teenage daughter to a rare terminal disease. She is hired in the early scenes by the military to communicate with a space ship that has made landfall in the fields of Montana, a large cylindrical vessel with few distinguishing exterior features other than a menacing dark shell. It is just one of several such aircraft that has appeared in the skies without warning, which poses complex political concerns; with multiple nations attempting to initiate contact with a plethora of silent strangers, what dangers are there if one approach is more insistent or aggressive than the other? And if one cracks the mystery, would there be any cooperation in sharing that intelligence with neighboring alliances?

Public hysteria is tempered by silent gazes and reluctant wonder; there are no discussions of mass evacuations, no foreshadowing to suggest dangers that could topple civilizations (at least initially). At some point the military manages penetrate the vessel itself, in which a cluster of observers – including Banks and a scientist named Ian played by Jeremy Renner – travels up inside. What they find is indescribably restrained: a small dark room mirroring an over-lit arena, in which gnarled beings communicate using strange symbols that are like hieroglyphics from distant worlds. Louise surmises that the easiest way to understand them is to begin with the basic mechanics of language comprehension, which leads her and her apprehensive peers to interacting with the life forms as if newborns: first with establishing names, then identities, then actions, and ultimately the structuring of basic sentences. Knowledge of what their communications reveal is left up to interpretation of the audience, which may be strategic; it is not so much what they are saying to each other that is important, but the idea that they are finding a way at all to engage one another without at first turning to violence or fear.

There is a fair amount of the latter, to be certain, but unlike the recent “Independence Day” sequel – certainly the most depressing of all possible alien invasion scenarios – no side is absorbed by the knee-jerk agendas that dictate most sci-fi action pictures. What the movie is, instead, is a quiet and introspective study of its strange situation, where lessons are necessitated by an underlying wisdom that sees alien visitors not as threats to human endurance, but as potential components in their evolution. Because the movie argues that language is, indeed, the key component in all forms of understanding, the Amy Adams character has dual responsibilities – as both an object of empathy for those connected to the emotional charge, and as a conduit for meditative considerations for those aligned with the intellectual angle. Her counterpart, meanwhile, anchors this conviction with an assurance of more logical reasoning – if these were indeed aliens meant to assault those they have initiated contact with, after all, why would they bother going to such exhaustive lengths to engage humans if just to reduce them to dust? The thought process serves to inspire thoughtful arguments relayed in very strategic dialogue exchanges that are circular, and when a military colonel played by Forrest Whitaker comes to ask all the devil’s advocate questions, it’s not for the sake of creating a superfluous conflict – they are simply the behavior of a mind lost in foreign wonder.

That sense of perspective is heightened by a production design that is remarkably on point. Relying mostly on static shots to tell this story, the cinematographer Bradford Young (“A Most Violent Year”) paints a canvas where the overreaching devices exist only as they must: to inspire the discussions amongst observers and actions within their conclusions. That he and Villeneuve resist most of their urges to wander further into the mysterious spacecraft (or to capture full reveals of the aliens themselves) is courageous; because the ships have such mystique and the ulterior motives of the visitors seems far more vast than mere issues of occupation, our knee-jerk curiosity almost gets the best of us. But this is a story about people who are gifted with the patience of foresight, and they can resist those tempting indulgences. At some point those contemplative measures will deliver them into a revelation more profound than anything typically seen in a straightforward action blockbuster, but of course it does. If communication is indeed the path to understanding, how wonderful that a movie of this much foresight can encompass so much meaning without resorting to the grandiose measures of mainstream Hollywood.

The final act will undoubtedly conflict with the ideologies of much simpler minds, and indeed a more urgent mind may feel restricted by the idea of seeing so much of this play out in long quiet interludes. But few times have I ever seen any film so willing to literally bend narrative structure to emphasize an overreaching point; as I watched Louise’s pivotal encounters, I was overcome with both emotion and enlightenment, even apart from the notion that the key reveal was one of the most original moments I had seen in a film in many years. What it ultimately accomplishes, you can argue, cannot be accurately summarized – because to do so would be to diminish the feeling of recognition you come to experience in those final minutes, just as Louise and Ian give into the cerebral ramifications of their discovery. “Arrival” will not be the movie that entertains conventional sorts seeking the latest thrill in a genre of vast visual possibilities, but in this moment when human intelligence needs genuine stimulation, few endeavors will be this profound or resonating. It is one of the best films of the year.