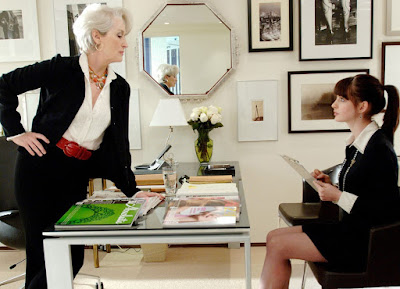 In the conventional sense “The Devil Wears Prada” is about a woman who finds herself at the mercy of a demanding boss and does everything possible to earn her approval. In a more conscious perspective, it takes on added meaning – namely as a metaphor for our work-obsessed culture and the growing divides between professional and personal value systems. The heroine at the heart of the matter is the embodiment of that example, and certainly there are moments where her struggles are exploited for the shallow exercises of a standard comedy plot, but why doesn’t it end there? Why does her situation persist so glaringly after the jokes fade and the characterizations erode? Because her life reverbs with the same struggles and contradictions that affect most in the American work force, where it has become a perfunctory routine to abandon personal space and mental safety nets. More serious or satirical contemplations would have burrowed down to the root cause of that irony, but this movie is far less concerned with reasons than it is with the ramifications. And that’s ok, you might say, because the surface of the matter is potent enough to engage our emotional investment, and the characters identifiable enough to sell this pitch with some level of relatability.

It never hurts matters to have these ideas – usually filtered through mainstream sensibilities – conveyed by dependable thespians. Consider Anne Hathaway as the sweet but driven Andrea Sachs; in the early scenes she wanders into an interview in the office building of Runway Magazine, where her rather ordinary appearance is met with immediate guffaws by the employees – including the head secretary Emily (Emily Blunt), who quips with a sardonic edge at her fashion sense like a passive aggressive word vulture. What annoys her more, however, is her applicant’s unfiltered ambivalence; Andrea cares little about the impression she casts, while so many others would make waves for the chance to work in these influential halls. That’s because she is an outsider of the industry and simply wants on-the-job experience, to fuel her after-school aspirations of being a serious journalist for a more reputable publication. Hathaway exemplifies this perspective so persistently that there is rarely a reason to doubt the conviction of her character, even when the movie must invariably adapt her to the chaotic nature of her boss.

That person, the aggressive Miranda Priestly, is played sharply (of course) by the great Meryl Streep. Her shtick is a singular exercise of cynical motives: never one to show emotion or weakness, she spouts orders in rapid succession, criticizes others in hushed tones, demands unending time and dedication, and instills a level of fear on others that puts underlings in a tricky emotional lockstep. Movie buffs will no doubt compare her drive to that of the female bosses in “Working Girl” and “Big Business,” where sarcasm was the badge of honor in a corporate world of diminishing male egos. Yet what Miranda she sees in Andrea is the antithesis of those she normally hires, whose devotion and enthusiasm has proven less likely to translate into loyalty or consistency. Here stands an outsider with a gift of assertiveness and work ethic, and in an unconventional moment she is granted the job, which inevitably leads to a series of rather uncomfortable early scenes where the new hire is thrown into a role where everyone is moving at freeway speed while she is still hitchhiking for an appropriate reaction time.

Uncertainty leads to mistakes, mistakes lead to learning, learning builds confidence, and then confidence is undermined by rather laborious tests of ability. Theirs is a routine driven not so much by competitive streaks as it is by a commitment to their personal work aspirations, both of which are driven by a stubborn refusal to fail. That gives their interactions a quality of alluring disgust, especially in the dialogue; during an early scene when Andrea scoffs at belt choices during a fashion run-through, Miranda’s pointed response serves to leave her insecure in her observations – and the audience breathless in amazement. At some point, however, the humor of the situation dissolves when it becomes apparent that Andrea’s improvements are costing her valuable time in personal relationships, and there is a rather sad moment where she comes home to her boyfriend Nate (Adrien Grenier) after missing his birthday party, sadly holding a single cupcake as an apology. The hardest irony of a world where you must climb the corporate ladders to make yourself known is that it rarely recognizes where identity begins: at the home, not in the hustle of a busy office.

You know this, I know this, most people in the workforce know this, and even “The Devil Wears Prada” knows this – perhaps far better than most movies about this relentless struggle do. The screenplay is an astute reflection of its source material, a novel that creates scenarios that are shocking, humorous and sad because all of them touch on real nerves and feelings. So many have endured the fiery passion of a boss like Miranda, and many have watched their confidence be reduced to cinders in the wake of a cruel dismissal from a supervisor’s words. Others have felt the sting of unintentionally causing friction with peers, and a select few have even understood the importance of a neutral personality in an environment full of butting heads. If the movie falls flat on any of its cylinders, it’s that no one watching really learns anything important about the fashion industry itself – other than the prospect that those within it will live and die to be at the top. There are brief glimpses of insight offered by Nigel (Stanley Tucci), the film’s most direct voice of reason, but who is he even fooling? There is a moment towards the end where his own aspirations are thwarted by one of Miranda’s many last-minute changes, leaving him to smile stiffly in a crowd that must never know the disappointment of her loyal followers. “How can you be sure she will remember you when it’s time?”, Andrea asks. “I don’t. But I have to trust she will.”

One of the movie’s most wildly disputed details is the ulterior motive of Miranda’s second-act ultimatum, in which she dismisses Emily from attending an important conference in Paris and insists on Andrea attendance instead. The threat: if she doesn’t go, then she would effectively be sacrificing her employment at Runway… as well as every other publication throughout New York. Is the warning a litmus test to push her new understudy to becoming a successor to the throne, or is Miranda trying to manipulate her into a situation of saving herself from the pressures of an inexorable industry? A critical scene right after, in which both women discuss seating charts while a morose boss reveals sad details about her own private struggles, is often seen as the tipping point in arguing the latter. Though it is certainly the most honest moment of interaction they will share, I am of the belief it is just another one of many tests, devised by a woman who knows there is no turning back and hopes to mold a promising person into assuming the frozen scepter of her own reputation. Does a final scene involving a rather surprising emotional reaction contradict this? Only if you are to assume that Miranda is entirely dead inside – that sort of philosophy is only reserved for the villains of more one-note comedies, where the protagonist must always be a hero and the antagonist the irredeemable villain.

“The Devil Wears Prada” is not that sort of film, I believe, because its motives have duel benefits. These are challenges we all face in the adult world – struggles I have personally questioned and frequently faced to boot, both in the journalistic medium (where I’ve seen how one’s integrity can be diminished by a shallow industry) and in the work world I currently know (where the job is only done when it’s done rather than at the end of a conventional 8-hour stint). Those that manage the tricky balance of a successful career and a healthy private life are the exceptions, not the prototypes, and the observations are only funny the first time around, when all the details seem to scurry across the screen in the veneer of humorous bewilderment. But we continue to reflect on the movie’s lessons long after the laughs have diminished because they are sound, relevant and conveyed by the talents of actors who offer legitimate stakes in the material. Towards the end, when Andrea turns to answer her cellphone and cheerfully tosses it into a fountain, her impulse is a reminder that our choices remain our own in places that are unkind to those seeking adequate stability. How refreshing it is to be reminded of that now, when so many others have been swallowed by the sentiment of the alternative.