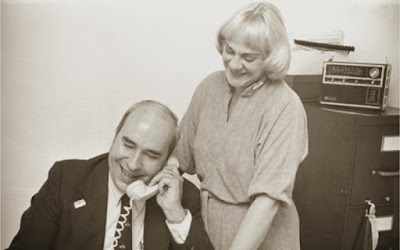 The first time any young journalist hears the name R. Budd Dwyer it usually occurs during introductory reporting curriculums, when the discussion shifts from writing styles and plunges into the troubled waters of ethics. Once thought to be the leading point of an argument about appropriate newsroom conduct, his very public suicide in front of television cameras has come to rest in the margins of a convoluted history in media decency, especially in the wake of a post-9/11 world of bombings, massacres and civilian beheadings. But it persists, no doubt, because there remains almost no similar conduct for people to compare it to; as such, his is a situation frozen in the shocking embrace of controversy, and a constant source of ambiguous political arguments that would like to erase his strange existence from memory. Shameless voyeurs, however, have preserved his notoriety even more than those fascinated by the puzzling circumstances leading to that tragic day, and easy is the opportunity to search the internet for those final moments, relentlessly plastered all over video feeds. Some may initially wonder if “Honest Man,” a documentary about his troubled political career, would even have been relevant if his last act had not continued to reverberate with perverse allure. Is there anyone left that cares more about the context of that moment than the disquieting inevitability of his lifeless body slumping down in front of a room full of cameras?

The most important test for James Dirschberger, the filmmaker of said feature, is casting aside the notoriety of the final act long enough to make his subject worthy of study. Can he, given the clout and the blur of the years leading up to his death? The answer is a surprising yes. The information highway has rarely been generous to Dwyer’s history (a Wikipedia page offers prolonged glimpses but not much in the way of concrete facts), but here is a director that has spent meticulous time interviewing, studying and coming to grips with the very situations that made the Pennsylvania treasurer the man he was – and the symbol of sensationalistic overkill he was destined to become. Of course the movie must cover those final moments with some level of clarity (what movie wouldn’t?), but rarely has any document about this kind of situation done so while underlining it with sound reasoning, much less a basic context. Then the moment comes where Dwyer, rattled from his conviction in a bribery case, chooses to hold an ambiguous press conference and place the barrel of a gun in his mouth while news cameras are rolling… and for the first time it preceded by verbalized understanding, where the pieces are pulled together by thoughtful discussions from loved ones and colleagues that knew him better than he seemed to know himself.

The most universal of the assessments justifies the movie’s title. A simple guy who had interest in political science during his formative school years, Dwyer began life as an aspiring teacher who came to worldly awareness after spending vacations in communist regimes throughout his early twenties. Eventually that conviction led him to the world of public office, and after running an optimistic campaign for the state legislature in 1970 he was elected a senator. The state’s republican party, thoroughly impressed by his straightforward approach and relentless professionalism, felt that opportunity could go much further; in 1980 he ran for – and won – the coveted state Treasurer position, reportedly at a time when Pennsylvania was amok with frivolous spending trends. One of those, the movie informs us, led to a rather nasty fight between Dwyer and governor Dick Thornburgh, who made some charges on the state’s expense account that were called into question. When Budd publicly refused to flip the bill for the charges, it began a feud that some sources say made Thornburgh adamant of revenge.

No person involved in Dwyer’s life – his wife, daughter, even his campaign manager – come right out to made such claims, though their views on the matter are certainly suspicious precursors to Budd’s later troubles. During his tenure as the Treasure, he – along with a handful of state employees – were accused of accepting bribes to influence the outcome of a state contract. Dwyer denied any wrongdoing. Testimony from a key witness of the matter – the enigmatic William T. Smith – colors the issue, though the interviews that Dirschberger acquires are intriguingly suspect (is he telling the camera the truth, or just what he thinks it wants to hear?) Others involved in the controversy, like Smith, accepted plea deals or turned state’s evidence for reduced sentences, while Budd opted to face down the charges in a prolonged trial. Weeks turned into months, then a year, and after many exhaustive moons a jury came back in late 1986 and found him guilty on all charges. The common theme with all those once present during the proceedings is that there was little evidence to implicate the defendant. Why did he lose, then? One prominent argument is that Dwyer’s defense attorneys were complacent, believing that the lack of evidence meant they had little reason to fight that hard for his innocence.

Footage of press encounters speaks for itself: Dwyer was adamant of that view, shocked at the outcome and broken from the inevitability of what the conviction would cost him – his livelihood, finances, family, everything. Leading up to a sentencing on January 23 of the following year, there is a suggestion from close family members that he was quietly brewing over how to respond to the “injustice” of the scenario, which provides its own red flags; this was a relatively happy man with the grace of a gentle spirit, now stuck in a quagmire that was mystifying and worrisome even for those that loved him unconditionally. Then, a clue emerges that foreshadows his most famous impulse: the knowledge that a sentencing would not only remove him from office, but would in effect cancel out the possibility of his family collecting valued pensions, inevitably leaving them in debt with his endless legal fees.

The events of January 22 are well-known by the standards of the blood-hungry media, of course, but “Honest Man” does not linger incessantly on the events – no doubt for reasons too obvious. Because they have been preserved so repetitively in the tasteless lapse of journalistic judgment (two networks showed the full footage of his suicide the same night after it happened, all but cementing their status for eventual online reproduction), the director only uses them as his hook; the real thesis of the movie is about the things that Dwyer hoped we would all consider because of his harrowing decision. Did he blow his brains out publicly to feed into media frenzy? Or to take back ownership of their intrusive nature? The answer is, I suspect, revealed in the writings he left behind following that unfortunate day; certainly it would have been easy to simply kill himself off camera and guarantee a pension for his family, but by doing it in such a public forum he knew that the curiosity of some onlookers would eventually inspire them to dig – to perhaps discover something about the case surrounding him that was overlooked or dismissed during the trial that decided his fate.

If the details themselves are not up to much investigative discussion, it’s because they are vague even to those who remember them. Either way, by the end, many of us are not exactly convinced in the guilt of Dwyer’s purported crimes. Was there more at work behind the scenes than the living witnesses can attest to? Dwyer once believed so, and it was a conviction he felt angry enough about that it brought him to elaborate sacrifice. “Honest Man” does not end with answers or cliffhangers but seeks to highlight the mystery in the milieu of judicial doubt. This was not a man convicted of crimes that were obvious nor slam-dunk. Some simply fade off into legal obscurity as they wait for their name cleared; Budd forever cast his shadow in the form of a grizzly and decisive epilogue, all but ensuring a notoriety that would invariably force those curious to question the truth. Perhaps it took far too long to arrive at that suggestion, but how refreshing that a filmmaker finally came along to audaciously ask the questions that needed some level of emphasis. This is a film as relevant as it is sobering.