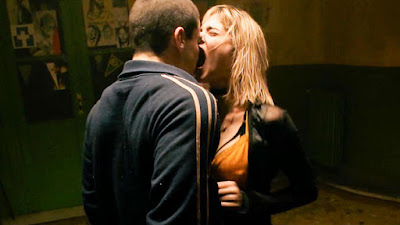 The first scene illustrates, quite shrewdly, the crude possibilities of this idea. While a tv monitor plays through various clips from audition tapes of prospective dancers, stacks of books and old movies nearby act as a framing device for his inevitable transgression. Among them: texts by Nietzsche, films by Fassbinder and von Trier, and even “Salo,” the infamous Pasolini feature that bound the Marquis de Sade to Italian fascism. These are visual cues, we soon learn, that will foreshadow what happens to the people in the central images, all of whom speak eagerly of a chance to be part of a musical movement that may tour beyond the confines of France. The specifics are never quite revealed, but they need not be: the crux of the agenda is displayed in a single-take shot that shows the dancers engaging in an ambitious choreographed routine, right before they move into a night of drinking, cocaine, and loud club music. Noé shows this all transpire without ever cutting away from the room; the camera moves between one set of characters to the next like a witness with ulterior motives, as if attempting to collect fragments of their stories to use as leverage for something later.

Leverage from what, you might ask? These are dexterous acrobats with the lowest ebb of moral fiber. Consider, for instance, a dancer whose primary agenda off the dancefloor is to bed every woman in the room; when he shares this insight with another, they exchange alarming views that play like normal rites of passage. One of their targets is an American lesbian couple, who may be harboring something contemplative beneath gazes that seem concerning. A gay man in the other corner of the room, the apparent boy toy of the night’s DJ, is convinced he can get into the pants of the room’s arrogant playboy. On and on these superficial exchanges are established, among others (including a possible case of incest), all for the singular purpose of displacing the human subjects from their inevitable behaviors. Noé does not want us to attach sympathy to them. His great test is to see just how far our patience with this concept can go – whether he can so thoroughly divide the people from their plight that we, too, can scrutinize the details from some mechanical angle.

The movie reveals its darker intentions shortly thereafter, when it is observed that the sangria they all have been drinking has, apparently, been spiked with something. Panic ensues amongst the dancers. No one knows who the culprit is, nor what the motivation might be. They do know, however, that it has rendered them hysterical – unwilling slaves to a rhythm they cannot control, if you will. One of the dancers, suspected of the devious act, is cornered by an angry mob of peers and thrown out into the cold. Another, who did not drink anything because she might be pregnant, is accosted by a suspicious onlooker and kicked violently in the gut. Then this leads to a public display in which she cuts herself at the cruel urging of the others, all while the camera drifts between an assembly of observers who are either 1) sensing danger nearby or 2) ready to indulge in the excess that seems swiftly approaching. Meanwhile, the dance troupe’s leader is sent into an emotional frenzy when she finds her young son drinking from the punch bowl, and she winds up locking him in a dusty utility closet nearby. Watch her face move from concern to horror when she discovers she has lost the key to the door and is now powerless to release him from his frightening prison.

As viewers, our natural impulse is to engage with this situation with some level of figurative impact, as if possessed by a need to transport ourselves to the bodies of the characters in order to grasp a sense of what they endure (and hopefully alter whatever outcomes they face). That’s because we know exactly where it is going and are horrified by the implication. Each scene plays like a step in a single descent towards the heart of a literal madness, where chaos freely overtakes the stability of people who should otherwise know better. They are, unfortunately, not likable beyond the implication of their nightmare. And it’s not that their activities are any more terrible than, say, what goes on in any other of Noe’s films; it’s that they are trapped inside a compound of altered perceptions, brought on by an unknown influence. Is it a metaphor for something greater, or is Noé simply casting a skeptical glance at people who belong to this otherwise superficial culture?

The answer lies somewhere between aggressive camerawork, neon lighting schemes and an aggressive blend of club beats and choreography. Audaciously, this is a man that has made a musical about the most nihilistic possibilities of the rave scene, ranging from vagrant sexual release to perversion, masochism, mutilation, torture, altered states and even genuine cruelty. So aggressive is the mixture that there is no clear divide, as if to surmise that the director sees no point in differentiating a safe vice from a harmful one. The great test during these chaotic scenes is determining whether he is critical of the excess or is gleefully getting off on it. Some, perhaps rightfully, will revile the approach and see no merit within it. I was overwhelmed with voyeurism, watching on and on as if waiting, however perversely, to see just how far this idea could go.

Then an emotional center emerges: Selva, played by Sofia Boutella, whose eyes bear witness to most of the ensuing action. She has the audacious challenge of being an entry point in material that otherwise has no easy gateway to understanding, and her need to move in resistance to the disturbing rhythms around her is admirable; it indicates she holds onto some level of personal resolve, even as the aggressions of her peers continue to act as roadblocks. Moreover, her skill as a dancer is used strategically as a mode of indicating the emotional toll of her character. There is a fabulous sequence in one instance where she is left alone, hypersensitive to what is transpiring, and she breaks out into what can be best described as a choreographed convulsion. In most films she would just seem like a screen-mugger chewing up scenery; here, the performance seems like a progression of a dance routine that continues long after its intended purpose.

The final act, meanwhile, is a dizzying tailspin of clashes culminating in what appears to be some sort of macabre orgy occurring on a dancefloor. Here is where the familiar Noé touch comes, once again, to realization: a camera that never stands still, neon colors that mute out details, and sound effects that play like a haunting murmur of sonic insanity. Then there is an added touch: the camera view transitions to an entirely upside-down position, as if to assume that the participants have long gone past their own stability and fully embraced the invert of their collective values. Is it symbolic of a literal hell? An underworld of decadence? Or a point of no return? What we interpret is informed by an experience that the director has been all too eager to erode over the course of a short, rapid 97 minutes. Why are we never able to take our eyes off it, though, if what occurs defies basic comprehension and even inspires emotional sickness? Like the great provocateurs of the cinema, this is a man who looks through the nervous system of an idea not to shock or belittle, but to comprehend something in the maddening underbelly. Somehow, he manages to keep pace with that possibility even when his film leans consistently over the edge.