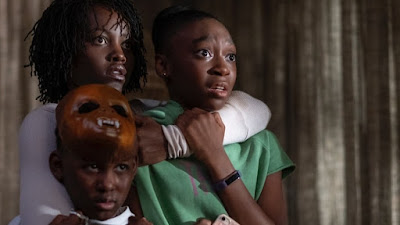 What separates him from the great pretenders is his conviction. Like early M. Night Shyamalan, his approach is the culmination of personal values that see great terror lurking beneath ordinary exteriors. Like Hitchcock, he shows an almost overwhelming joy for obsessing over the precision of details, especially when it comes to how the placement of actors and their dialogue can add startling emphasis to their ordeal. And like William Friedkin, he is not content to simply get by with the bare minimum from his actors; they must live and breathe the horrors thrown at them, as if oblivious of the divide caused by an intrusive camera lens. No, this is not a filmmaker who lacks the skill or depth to simply shortchange an audience (at least consciously). So why does the last half hour of “Us” play it awkward with framework that otherwise ought to lift what comes before it? His problem may be that he is projecting more onto the material than he is willing to let on. That effectively relegates his audience to unfortunate bystanders. In some instances, especially in stories that could lead to sequels or extended cuts, that can work; here, in a film that otherwise functions as a stand-alone entertainment, it creates a problematic aftertaste.

Up to that point, however, we have confidence in his trajectory. The movie opens several years into the past, during one mysterious night when a young girl named Adelaide is wandering through a local carnival at the beach with her parents. We soon discover that it is her birthday, although there is a moment where her guardians are distracted in an argument and lose focus of her whereabouts, allowing her to wander onto the sandy shore and into a Hall of Mirrors attraction. This is where the implication goes beyond notions of the fun or odd; here, she sees a literal manifestation of something so startling that she is, apparently, rendered forever traumatized. Flash forward several years later, and Adelaide – now played by Lupita Nyong’o – still wears the scars of that childhood disturbance, and there is a similar scene during a family vacation (where she is now the parent of two children) that perfectly captures her quiet hysteria: while chatting with friends on the beach, she loses sight of her son and suspects he may have wandered off to the same fate that once befell her. Peele sees this as a reactionary measure meant to implicate his lead in the impending mystery, of course, but it casts broader nets: namely, whether she is cognizant of what is coming, and perhaps attempting to stifle it for as long as possible.

The film’s terrible possibilities are revealed shortly thereafter, during a quiet night while the Wilson’s are unwinding from the first day of their vacation. Four hooded figures appear out of the shadows – two adults, two children – and descend on them without warning, and corner them in their living room. Who are they? What is their purpose? A conventional horror movie wouldn’t so much care about their origins as it would about the ensuing torment; here, the movie skips past that possibility when it reveals them as literal duplicates of their prisoners. “It’s Us!”, young Jason astutely observes. Although not precisely: they possess more menacing demeanors, speak in low painful gurgles, and seem driven by a desperate yearning rather than a need to be respected or understood. A chase ensues that gradually becomes an endurance test – for them, for innocent bystanders, and for an audience that proceeds with each scene like they have fallen deeper into a rabbit hole, with little to no hope of ever coming back to a stable surface.

Part of the intrigue is mandated by a screenplay that never ceases with key reveals. Consider, for instance, how rapid it moves the Wilson family through a discovery that ought to paralyze them; just as they are sent scrambling in the nearby wilderness by their menacing doppelgangers, they inadvertently stumble onto the property of friends who, too, are dealing with a similar confrontation. But the film does not stop to force a consideration on them; their bafflement must proceed through a series of circumstances that requires them never to stand still, even as the scope of their reality broadens into something inexplicable. I admired the audacity of that pitch; Peele is clearly motivated by something more than just the ramification of an isolated incident, and his core players are not victims of some sort of self-imposed victimization. There is a sense in watching “Us” that these are people who have the sort of savvy to proceed through nightmares with a bemused detachment, even if it means they may be stifling something that could cost them their lives (or worse yet, their grip on sanity).

That momentum builds well and without interruption, leading to scene after scene where their survival depends on quick reaction times and forethought. The best of these moments occurs in the second act, after the Wilson’s have made a speedy getaway and, much to their alarm, come into confrontation with Jason’s clone while maneuvering through abandoned wreckage. During what appears to be a stand-off that is clearly setting up a trap, Jason makes a discovery that does two essential things: 1) emphasize the common sense of the characters, and 2) point to an answer that, quite possibly, functions as a defining metaphor. Here we think we understand what the movie is arriving at: a clear-cut statement about how individuals are roused by a split in their personality, and whether giving power to the darker image is something everyone is destined for in a world that is ambivalent. The implication matches the resonant undercurrent of “Get Out,” which told one story while indirectly referencing another – one within a mind that lacks control of the body. Many assume Peele is simply making broad statements about cultural divides, but I think that is only the tip of a greater incentive. “Us” proves that this is a filmmaker who is motivated by far more than he lets on.

Unfortunately, the film’s attempt at bringing cohesion to that possibility is undermined by a final act filled with circular dialogue, vague references to unknown side-details, and visual symbolism that seems curiously out of sync. Consider, for example, that he populates many of the final scenes with rabbits – are they supposed to underscore a commentary on mass population, or something more elaborate about the systemic nature of living organisms? Many of the potential answers don’t fit, or are too broadly drawn to work within the context of the earlier scenes. Likewise, Lupita’s final exchanges with her own body double – which are very well acted, yes – create unnecessary doubts in the details. Are we really to believe, even in the scope of this twisted world, that this situation could play out with such minimal advanced warning? Or that someone so removed from the common mechanics of civilization could formulate such an elaborate plot with such instinctive precision? A later revelation can be seen coming from a mile away, but it is the least of the movie’s offenses; by then, we have lost so much touch with the film’s puzzles that any familiar detail, however transparent, is a welcome change.