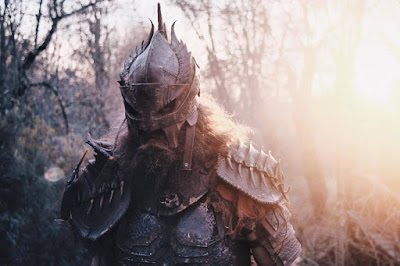 These thoughts swirl consistently in our heads throughout the brief, taut and entertaining 72 minutes the movie holds us, where we are often left to guess the horrors of the unseen while the foreground pulsates with a consistent desperation. Some part of that approach may be due to the film’s budget – reportedly a mere $30 thousand, which reduces the opportunity for a technical wizard to exploit the virtues of CGI or animatronics. Others will say the choice only amplifies the material, that without all the typical visual cues or confrontations, the movie generates a perverse mystique. Meanwhile the presence of the protagonist, a burly and gruff man with stony eyes and withdrawn features, is menacing in its own way; though his agenda involves engaging with terrible creations, one suspects he prefers their company, however brief, over sitting at a table to exchange small-talk with humans that would otherwise annoy him. These predators are his primal equals.

The key in this realization is the performance by Christopher Rygh, a mountain of a man who either has the stature of a Viking, or disappears into one convincingly. Here he appears in layers of furs and armor that do little to conceal the muscular physique underneath, scarred by prior attacks and roughened by the unforgiving elements. No emotion leaves his face – no, not even when he visits the gravesite of his daughter, to inform her that the beast who killed her has apparently been seen again in the area and will not live long enough to flee a second time. Most movies dealing with that sort of promise usually involve characters who are facing certain death reluctantly; here, the head hunter invites his fate as if its far less painful than the potential alternatives.

Until the climactic exchange, however, what we get is a well-focused snapshot of a world beyond the conventional possibility. Corpses of dead creatures are brought to his cabin and harvested for more than their trophy heads. Fluids fill jars around the edge of a wood table; later, after a brutal attack leaves his left arm mauled beyond comprehension, the contents of one become the salve that will seal the deep wounds (his cry of pain, meanwhile, is harrowing and believable). A horn in a distance plays like a call to arms, but it provides the director, Jordan Downey, a solid stylistic consistency: his hero hops aboard a horse, disappears among a plethora of trees, and the camera focuses on a fog in the distance while the inevitable confrontation is done entirely through sound. In the next shot, he returns home – usually wounded, and mounts a severed head on the trophy wall. Yet another kill for the growing museum.

The test for viewers becomes not what motivates him, but whether his dance with the macabre is in the service of a nature that craves violence. It is clear, based on periphery scenes, that his kills are contracted. An arrow in the trunk of a tree containing a scroll of instructions suggests a relationship with higher influences, potentially royal. But this is a man who is no more devoted to the loyalty of his assignments than he is to the memory of his lost daughter. They play like noise in a backdrop there is little reason to stir in. What lies ahead, unfortunately, is a wave of chaos that promises little relief or reward, other than the narrow possibility of surviving long enough to dress a few wounds. Some perverse sense of masochism drives him towards the hunt, and though there are few occasions on screen that offer any glimpse into any of the momentary fear that might come with it, Downey creates a convincing space for us to project whatever suspicions we desire. Material this forward, this unvarnished, may simply work better if we can bring our own theories to it.

Acceptance of this reality is also what enhances the movie’s strange climax, which attempts to confront the horror head-on but dodges the clarity of it by well-placed cameras and constricted lighting. What is the beast that the head hunter has sought for so long? When he brings its head home and it is roused back to life after encountering a foreign substance, does that say something more horrifying about the creature… or about the substance it came into contact with? A long passage of scenes involving point-of-view shots, strange noises and tense chases in the dark propel us towards a confrontation that is done very well: inside a chasm, where the beast and his hunter become briefly locked in one last dance of violence before one of them is silenced by it. The final shot, involving one last twist before the closing credits, doesn’t really work – it plays like a shameless deception meant to unravel the intensity of the preceding scenes – but up to that point “The Head Hunter” moves quietly and patiently through the morass of its premise without convening to the typical jump scares or frontal assaults we associate with this genre. Less perceptive sorts would have you believe Downey is crippled by his shoestring budget; in truth, he turns it into the conduit for a very solid descent into a thrilling little mystery.

Dude, We loved the movie overall. And your review was much appreciated by us. It was spot-on, and I hope more people get to read it.

These are in your spins' winnings, not the deposit bonus. NeedforSpin Casino undeniably tries to offer secure and legit playing in} for its gamers. Thus, this casino obliges and respects sure guidelines that apply to all online video games. In different words, NeedforSpin points out 카지노사이트 that gambling just isn't a source of earnings but fun and stress-free playing in} as a substitute. It’s important for New Zealand gamblers to notice that it isn’t at all times in regards to the quickest deposit and withdrawals. They should turn out to be conversant in the clear terms and situations that spell out the minimal deposit quantities, betting limits, and wagering necessities for the bonuses.