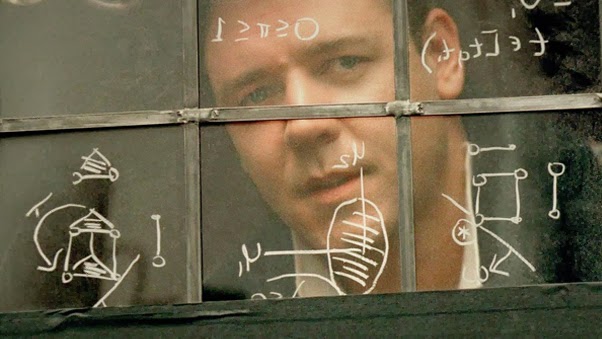 But a peculiar thing happens only a few short minutes after our senses feel desensitized. We actually being to admire the movie. Our high expectations are renewed. And we slowly but surely start to anchor our faith and admiration in the main character, who is no more a faux Hollywood creation than Jar Jar Binx is a masterful special effects invention. In fact, this John Nash character is perhaps much more genuine and intricate than the average young prodigy found in most decent character studies; he bursts with charm, knowledge, kindness and serene directness, but suffers the devastating impact of an incurable modern illness, something that nearly takes away everything he has ever worked for.

"A Beautiful Mind" is based on the true story of one of the 20th centuries most revered and successful mathematicians, a man who flourished wisdom and success during his years as a student at a top-notch Ivy League university, later instructed at MIT, nearly fell from grace when he was diagnosed with schitzophrenia, and later was awarded the Nobel Prize. The individual in question, Mr. John Forbes Nash, is played here by Russell Crowe in perhaps one of the finest acting achievements seen on screen in the past two years. Nash, as the film tells us, was very much the misunderstood type because his approach to learning fit no conventional technique; he believed there was a scientific explanation for everything, he though that games he couldn't win at were somehow flawed, and time and time again, he was spotted in his dorm room scratching numbers and complex equations all over his window pains, trying incessantly to solve or understand theories that not even the masters of mathematics were able to do. As he tells his roommate Charles (Paul Bettany) in an early scene, "my teacher once said I was born with two helpings of brain and only one helping of heart."

The level of intelligence Nash possessed was probably too great to explain, but the film doesn't insist we delve into his psyche to find out. Instead we merely see his mysterious gift manifest in the numerous activities he is involved with, one of them being the assignment to decode a Russian secret message for the Pentagon, who fear that their military may be close to dropping an atomic bomb on U.S. Soil. The message is presented on large boards in random numbers, and as Nash's eyes swiftly scan over them, he is able to identify patterns that stand out. Similar affects occur when he stares at newspaper headlines for a top secret assignment for a length of time. And though he can't explain what his mind does, the ability fuels his need to investigate, theorize and solve the problems laid out before him.

Unfortunately, as those passions are fueled, so is his increasing paranoia of being watched. Assigned as part of a confidential research team, Nash quickly gets the feeling that the government wants to silence him for the integral information he knows about them, and as he catches mysterious figures following him around, he collapses mentally in utter panic. Later, at a local psychiatric ward, doctors diagnose him with schitzophrenia, a mental disorder that causes hallucinations and utter hysteria. His wife Alicia (Jennifer Connely) tries to assure the doctor (Christopher Plummer) that John is working on top secret information and isn't crazy, but how can anyone be sure? If he is a schitzo, isn't is just possible he imagined the whole thing?

The movie does an interesting trick with his illness, too; instead of directly revealing the evidence to the audience, we see the world and its manifestations through Nash's eyes, leaving the audience to wonder whether what we've just witnessed is either a figment of his mind or simply a good old government cover-up. Eventually the truth surfaces, but not before we have been dragged into a highly tense and ominous cluster of scenes depicting the battle between reality and insanity. The film's intensely deep investigation of this ominous disease is so thorough that, at times, we feel as if we've contracted it ourselves. But it isn't solely about the disease itself, nor is it about the man's individual achievements. Above all else, "A Beautiful Mind" is a story of survival and perseverence.

The movie was directed by Ron Howard, who, as I have made so abundantly clear in the past, is not exactly one of my favorite directors. Shockingly, the work he presents us with in "A Beautiful Mind" is not just his own best, but some of the most astounding of the year. The movie practically bleeds with authenticity; every moment, every bit of the crucial investigation is pulled off with passion and allure. And what's more, Howard has the talent of Crowe at his disposal, who now may very well be one of our greatest living actors working in Hollywood. Combine that with equally fantastic supporting performances and a script that seldom slacks off, and "A Beautiful Mind" is one hell of a movie.

Produced by Brain Grazer, Todd Hallowell, Ron Howard and Karen Kehela; Directed by Ron Howard; Screenwritten by Akiva Goldsman; based on the novel by Sylvia Nasar