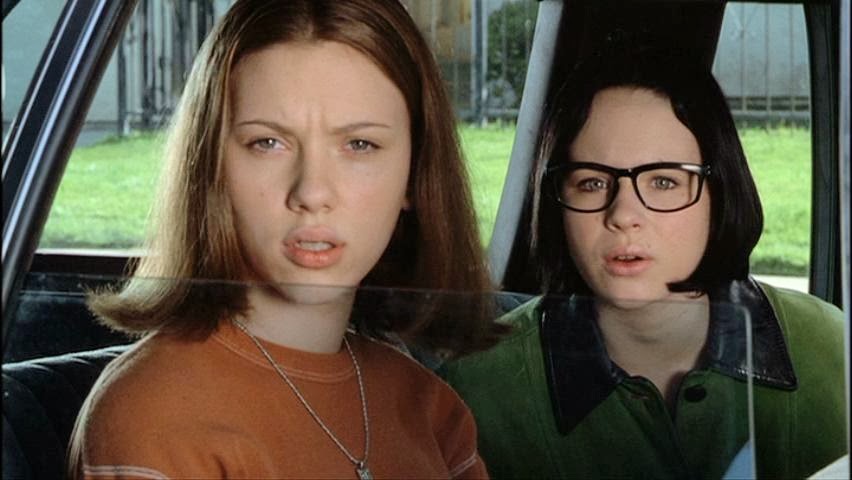 Terry Zwigoff's "Ghost World" studies this idea in a way that could easily suffice as a noted influence to those who have not yet arrived at their necessary determinations. Enid (Thora Birch) is a recent high school graduate who has no plans for herself beyond the current week, other than to secure her status as a rebellious and unconventional entity amongst a society of people she cannot stand. Taking company with her childhood friend Rebecca (Scarlett Johansson), the two girls wander aimlessly and ceaselessly through the streets of their Los Angeles neighborhood, editorializing on every aspect of every person or thing that catches their eyes, seeking to brew up as much trouble as they can on anyone they feel deserves it. One of their common habits, in fact, involves them stopping by the local market almost daily to harass their working friend Josh (Brad Renfro) by making him list off all the place's ice cream flavors, even though they already know what's available.

What starts out as seemingly innocent fun, however, quickly becomes life-altering when Enid discovers an ad in the local newspaper placed by a man in search of a woman he once met. In attempt to have some fun at the guy's expense, she answers the ad, pretends to be the woman, sets up meeting instructions at a restaurant and then goes there, staying hidden so that she can watch his embarrassment as no one shows up. But she is quickly taken by surprise by this man, Seymour (Steve Buscemi), as he is reserved and shy, has no real friends or relationships, and doesn't seem to conform to any typical societal standard. Enid is utterly infatuated by him and his lifestyle, and soon she is able to make her way into his life and form a friendship with him.

As a director, Zwigoff is practically a newcomer to the big screen; a search over at the Internet Movie Database, in fact, brings up only two previous directorial credits, a documentary called "Crumb" and another titled "Louie Bluie," both relatively unknown. But if "Ghost World" is anything to go by, audiences with undoubtedly be seeing more of him in the not-too-distant future. The movie is a very distinctive, offbeat and poignant endeavor, steeped in rich performances and characterizations and bursting with inevitable wisdom. Almost everyone who sees it could learn something about themselves, about others, and about life in general if they look closely enough. But alas the screenplay itself, while certainly filled with relevant human intricacies, lacks the thorough emotional depth and tyranny we feel is crucial to Enid's development as a character. At one point of the movie, Rebecca breaks off the friendship, disappointed by her friend's nihilistic attitude and inability to take charge of her life. Later we see the two reconcile, but it happens so subtly and swiftly that we are left with a sense of disappointment and confusion. Apologies are exchanged, suggestions are made, and then... that's it?

Still, "Ghost World" is quite unlike what moviegoers have seen throughout the past year, and though the movie isn't as remarkable or groundbreaking as so many have claimed, it does have a definite lasting impact on the audience. There is a moment when Enid, loaded up on liquor, announces to Seymour that she hates everybody in her life because they always try to hold her back. "Why can't I do what I want to do?", she asks. But what is it she wants to accomplish that people are preventing her from doing? She doesn't know the answer. She never does. Hopefully, that isn't the situation you're stuck in yourself.