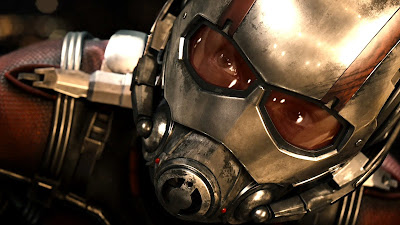 Somehow the setup always amounts to the same structure: a brilliant mind in a giant business organization experiments with something that can alter human gene structure, and inadvertently gives birth to a superhuman being that becomes targeted by a corrupt villain within the corporation. It is the tried-and-true formula of many a comic book series in the Marvel Universe, and minus subtle variations the results yield stories about unlikely heroism in the presence of innocents who barely understand their immense possibilities. That was certainly the selling point of turning “Spider-Man” and “Hulk” into film adaptations, and now comes one of the more obscure examples in the Marvel line: “Ant-Man,” about a guy who puts on a special suit that, bewilderingly, transforms him into a tiny object no bigger than an insect. What was such a suit made for? To hear this bizarre plot tell it, such a creation would allow the corporation to build an army of tiny soldiers to sell to the military, who would be skilled enough to undermine the operations of enemy nations without ever being seen by their opposition. Right, because men the size of ants are really agile enough – even in a super-strong suit – to completely destroy the momentum of national enemies possessing weapons of warfare.

The trick to respecting the endeavors of “Ant-Man” are not so obvious right after a first viewing. When I emerged from the theater, my primary instinct was to scoff at everything I had seen. To do so, however, undermines the obscured intentions of the direction and special effects, both of which unite here in an ambitious resistance against a formulaic screenplay; for those at the controls, this is a film destined for a conventional payoff that must offer something unique and humorous in between all the predictable plot devices. After some time contemplating those possibilities, I began to see what the filmmakers were getting at. Not a single story development here arises from inspiration, and certainly the bulk of the characters read through their dialogue like they are reciting textbook examples of action movie clichés. But when you get right down to it, there is something rather amusing about watching a protagonist the size of a fingernail doing ambitious stunt work while he attempts to survive dangerous obstacles in order to carry out important missions, usually while utilizing armies of ants to facilitate the plan. Say what you will about the pedestrian screenplay, but you definitely have never seen some of these images before, or been so easily roused to amusement by such eccentric ideas.

The film stars Paul Rudd as Scott Lang, a petty thief who has just emerged from prison and is down on his luck; unable to find stable work because of his checkered past, he is compromised in his ability to visit his young daughter, now in the custody of his angry ex-wife. Typically, a plot situation like this yields a prospective stepfather that will be an annoying killjoy with a knack for upstaging the affections of the real father, and “Ant-Man” supplies one is Paxton (Bobby Cannavale), who also happens to be (surprise surprise) a cop always looking over his shoulder. One might think that such obstacles would be enough for Scott to continue on the path of the straight and narrow, but of course not; soon after, he is back to staging burglary assignments with his best buddy Luis (Michael Pena), usually at the site of expensive houses in first-rate neighborhoods.

That becomes the greatest of mistakes when Scott breaks into the home of a highly successful scientist named Dr. Hank Pym (Michael Douglas), and winds up stealing some kind of strange suit secured behind the walls of a safe. Another plot contrivance must insist that such a finding must be tinkered with enough to cause some kind of shocking reaction, and when the curious thief winds up trying said suit on, it shrinks him into a tiny object and sets him on an obstacle course of new dangers: running bathtub water, long falls, dangerous treks under human feet, and so on. The irony (at least to the characters) is that Dr. Hank was actually expecting Scott to steal his creation, all for the ulterior motive of having him wear it – and master its many functions – to wage war against the scientist’s newest enemy: Darren Cross (Corey Stoll), who has stolen Pym’s creation and intends to use it for much more diabolical purposes.

The movie spends most of its middle act in the process of rigorous training. Because Scott is not the inheritor of natural superpowers like his cousins Spider-Man and the Hulk, that means he essentially must learn the suit’s various abilities on a trial and error basis. Many of those scenes amount to a few precious laughs; others, like a moment when Pym attempts to show his new understudy how to control the actions of ants using electromagnetic brain waves, simply defy description. But they are, at their core, unique endeavors; when the plot requires the Rudd character to master his insect armies in order to sneak through the ventilation pipes of the corporation, it amounts to an ambitious display of precise special effects that are as clean as they are minimal. Furthermore, the usage of different variations of ants (including a variety of the insect that flies) is creative and inspired. There is the sense here that if, in fact, a human being really was shrunk to the size of an ant and was asked to carry out such absurd goals, this is exactly how it would play out.

What that all leads to is a climax that functions on dual values: downright silliness (the plus) and obligatory chase scenes (the minus). When Ant-Man winds up going to battle with Cross – now fully decked out in a wasp-like variation of the costume – they commence their fights in miniature. For weapons, one of Scott’s greatest assets is a metal boomerang-like cylinder that can enlarge a small object, and during a confrontation on a toy train he inadvertently brings some small things to life size. The results, admittedly, are hilarious; the sight of a toy train sticking out of a little girl’s bedroom window is choreographed with the right balance of humor and precision, and another in which an innocent ant is made to be the size of a dog provides the story with additional laughs during the picture’s resolution phase. Unfortunately, those moments are marred by your run-of-the-mill action encounters that involve wild chases on the highway, confrontations in a helicopter in a key moment of attempted escape, and ambushes at the homes of innocent families who are about to accumulate the cost of immense property damage.

Of course these things all come to fruition because the narrative before it pays such little regard to the more unique aspects of its quirky superhero, and of course the interim is filled with the same types of discussions between characters that shed light on problematic home lives or unresolved personal issues. That has simply become the nature of a story like his. But “Ant-Man,” thankfully, isn’t an entire bust. The director, Peyton Reed, does a good job of keeping his protagonist likeable in a sea of maddening clichés, and facilitates a tone that considers the details from a less serious angle than many of the other comic book film adaptations of recent times. No one involved takes any of this seriously, and that’s a virtue given the absurdity of it all. When it comes to that marginalized variety of superhero films, this is not a movie in the class of “Guardians of the Galaxy,” but one that still has no problem holding its own against the onslaught of predictable outcomes and boring retreads that have become the staple of this crowded genre.