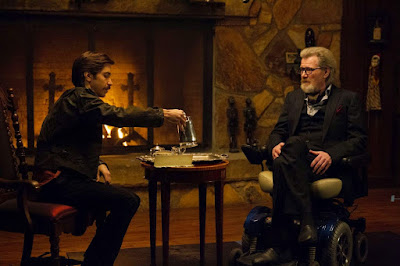 Mere words cannot adequately describe Kevin Smith’s “Tusk” – only obscene gestures. In the lengthy pass of time we spend discovering bad movies, so rarely does one come along that fills our heads with such toxic impurities, and does so on part of some cheeky in-joke that only the director and his close buddies seem to understand. Based entirely on a dare that originated from one of Smith’s very own podcasts, what exists on screen is an exercise in random debauchery, a self-indulgent vomitorium that knows no limits of tact or plausibility, and misses every note in orchestrating an effective rhythm in carrying its bizarre ideas forward. The greatest tragedy, I suspect, is the intention. What gave Smith, a guy with a fairly established directing career, the shameless conceit to put any of this on screen? Did he really find it funny (or worse yet, scary)? A great many disgusting things occur in abundance here for the majority of the 100-minute running time, but none of them even approach the discomfort we feel in knowing just how pathetic these filmmakers look. One hopes they all remind themselves that they were once good at their professions before sinking further into this maw of stupidity.

I fear, alas, that what “Tusk” offers is more prophetic than accidental. To grasp that prospect, we must at first understand the origins of the screenplay. The idea for the film was conceived years ago in a joking manner between the director and a peer during a live internet radio show, where Smith was reportedly so enamored by the idea that he asked his listeners to vote as to whether he should make it into a feature-length movie. Resoundingly, that fanbase wrote in overwhelming support, resulting in a laborious 15-day shoot on a shoestring budget. While ideas don’t always originate in the heads of their directors, they can at least be managers of their vision. Here is a man behind the camera that appears to possess none; it’s as if every plot point, every forced line of dialogue and every manufactured jolt is labored by a hand of influence that knows nothing of the filmmaking process, and cares even less about the repercussions. What it ultimately represents is not just the arrival of yet another godawful product in a problematic Hollywood, but the onslaught of a new era of creativity where projects are the byproduct of direct audience influence instead of singular conviction. It’s as if the film’s very existence opens up an ugly gateway into a new era of shoddy cinema.

The premise, a mangled structure of ridiculous ideas, begins with one curious inquiry: what happens when a man obsessed with his own ego wanders into the lair of someone who knows how to crush it? That is the dilemma that will be faced by one Wallace Bryton (Justin Long), a very popular podcast personality whose online radio show (dubbed the “Not See Party” – ho, ho!) exploits the mishaps of others seeking internet fame. Towards the opening of the film, him and his fellow DJ Teddy (Haley Joel Osment) are having a laugh in regards to a teenager who cut off his own leg on camera while playing with a samurai sword, and the conversation swings to an idea that Wallace is all too eager to implement: he should travel to Canada, meet this kid and conduct a candid interview with him for an upcoming podcast. Alas, when he shows up to his doorstep and discovers the family in mourning of his recent passing, it becomes a trip of dead-end possibilities… all until he discovers a flyer on a bulletin board at a local convenience store, summoning potential new roommates to the mansion of an aged storyteller with a lifetime of very colorful experiences. Naturally, Wallace’s online show could only benefit from the yarns of such a man, and the two come to arrange a meeting at his home out in the middle of the countryside.

The home is the property of one Howard Howe (Michael Parks), a wheelchair-bound eccentric whose engaging demeanor is scarcely enough to cloak menacing eyes. Unfortunately, Wallace is not the sort who observes closely enough to detect danger; he is too much of an arrogant smart-ass for that. I suspect, furthermore, he has probably never seen a horror movie in his life, too; if he had, he would immediately have known the danger of venturing off into a stranger’s home out in the middle of nowhere, or at least have been smart enough to realize that you don’t drink what the host has to offer, especially if you don’t know what’s actually in the saucer. The result: he is drugged as Howard regales him with stories of older times – some of them fanciful, others absurd – and describes many of the eccentric artifacts scattered throughout his house, including a penile bone from a walrus that sits on his mantle. It is clear that this strange being’s intentions are not exactly all that innocent – especially when he shoots devious looks in his guest’s direction while offering passively insulting quips (“The walrus is far more evolved than any man I've ever known. Present company included.”).

That brings us to the mother of plot twists in “Tusk” – the realization that, when Wallace is kidnapped in an obligatory setup and made prisoner in the domain of this strange and dangerous man, he intends to turn his newfound prisoner into – get this – a walrus! Why a walrus, you might ask? Oh, but I’m getting ahead of myself; one of the most noteworthy of Howard’s cartoonish stories was about how a walrus, on the open seas, managed to save his life from drowning, and he returned the gratitude by striking up a friendship with him. “Mr. Tusk,” as he is referred to, is a nostalgic device used to propel all of Howe’s bizarre views of life, including dark underlying motives that put his prisoner’s life at risk. He doesn’t necessarily want to torture or destroy his fresh catch as much as he wants to recreate him; missing his old noble friend, he goes on a gory mission of mental torture and physical mutilation in order to turn this man – so misplaced in his own arrogance – into a mumbling animal of stitched flesh and fangs. The process at which the undertaking occurs is vehemently strange, but not so gory as to reduce us to painful winces. Perhaps Smith’s restraint here is that he wants us to find humor in the preposterous nature of the final surgery. His intentions, alas, are embarrassing and pathetic.

The plot throws all the typical subplot curve balls. Wallace’s girlfriend Ally, naturally, predicts danger and discomfort in a flashback sequence, minutes before we discover that she is secretly carrying on an affair with his co-DJ (the Osment character). After the critical transformation into the Walrus, Wallace’s eyes and ears absorb new disturbing details of his captor’s experiences; the presence of a walrus-like corpse at the bottom of a water tank, for instance, suggests that this event is a repeating offense on part of a sadistic madman who loathes humanity. And then, when Ally and Teddy wind up discovering panicked cellphone messages from Wallace before his mutilation (as if a cellphone would really be left out in plain view by a disturbed kidnapper, mind you), both of them trek through the Canadian wilderness hoping to save him before it’s too late. Oddly enough, all of that occurs under the watchful help of a bounty hunter named Guy Lapointe (Johnny Depp), who has tracked the infamous Walrus creator for many a moon and is determined to put an end to his crimes just as much as his followers are eager to stop anything worse from happening.

By the end, however, it’s hard to decipher how anything worse could have gone on in this tragic misstep of professionalism. Smith’s writing plays like a violation of his own classic principles; ordinarily so precise with character dialogue, he has concocted a menagerie of nonsensical soundbites that amount to nothing profound or meaningful, even on part of a villain with dubious intentions. His plot is a painful display of groundless purpose, while his premise violates all laws of cinematic significance; you get the impression while watching it that this all would have been more amusing as a joke told by some random intoxicated stranger standing on the street corner. And what of those poor talented actors? All of them (save for Michael Parks, who does convey himself as a very convincing villain) overact in such a way as to suggest gleeful greed, hamming it up because they know that their buddy of a filmmaker intends to cut them a big check for being in on the joke. But the joke – in all possible forms – is just not funny. Nor is it disturbing. Or well-made. Like an amateur film extracted from the bowels of college film school, “Tusk” is juvenile, half-baked, childish and awkward. And much like its own vile title creation, it is a movie that meanders, fills the screen with ugliness, cries out nonsensically, and eventually crawls back into the safety of the darkness. And that, dear readers, is exactly where it deserves to remain.

Yes, your first sentence explains it all. Does Kevin Smith have nightmares that some super fan is going to kidnap him and force him to write a good movie again?

This is like if Misery was written and directed by someone with a traumatic brain injury.