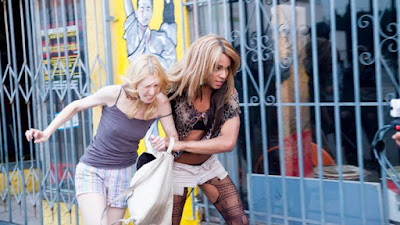 Our natural instinct to consider Sean Baker’s “Tangerine” from the perspective of an unlikely buddy comedy is, perhaps, not at all surprising. There is consistency in the film’s tone that suggests it is exactly what the filmmakers were going for; throughout the Hollywood misadventures of two transgender prostitutes on the hunt for a cheating boyfriend/pimp, an abundance of quips and one-liners are hurled at the screen in rapid supply, usually bookended by instances of flamboyant flair or uproarious confrontations filled with attitude. We laugh frequently – sometimes out loud, at other times uncomfortably. But then the movie’s true nature comes to light in a final two minutes of sobering conviction, in which we are reminded that in all things, none of what these two leads endure here should be at all hilarious. Why does the movie seem to mislead in that way? I suspect given the times we live in, the twist is metaphorical for how we look at the transgender minority in this country. It’s easy to find comedic value in the presence of someone who walks through life like they are play-acting, but maybe, just maybe, they do so because they are hiding darker realities: namely, the realization that they remain such glaring outcasts in a very slow trek towards social acceptance.

“Tangerine” is what we come to recognize as a film epiphany, a big screen endeavor that finds its relevance based on the notion that it arrives precisely when it needs to, in the thick of cultural arguments for and against the choices of people who live as the opposite gender. In that regard, it inspires many of the same arguments that were sparked by the arrival of “Brokeback Mountain” – primary among them, who are we to decide who a person can and can’t love (or more importantly, what identity they can take on)? That makes it more than just an observant contemplation of those themes, but also a reflective one. There are times when we are so easily caught up in the silliness of the primary story that we forget what context we are even laughing in. Are we amused by how colorful and wordy the two main characters are when they are on a fevered prowl for those that have wronged them? Or are we chuckling uncontrollably because it is part of our conditioning to look at them as elaborate caricatures? In that one critical final scene, all of our perceptions come to a head in a moment so deep that it leaves many questioning their own acceptance of others.

Assisting in the discovery of that irony are two protagonists that quickly earn our admiration. The movie is the story of a day in the life of two Southern California transgender prostitutes, and how they cope with the dichotomous approaches of mainstream observers. As the film opens, girlfriends Sin-Dee (Kitana Kiki Rodriguez) and Alexandra (Mya Taylor) are reuniting at the local donut shop following Sin-Dee’s release from prison, and the two share lighthearted banter. It is Christmas eve, and the cheer of the holiday is infectious to their behavior… all until Alexandra lets it slip that her best friend’s boyfriend Chester (James Ransone) wound up hooking up with someone else while she was in the slammer. Not just any other person, mind you: an actual naturally-born woman, which to Sin-Dee only intensifies the severity of the infidelity. And thus begins a long trek through the warm streets of Hollywood where the wronged hooker intends to confront her pimp boyfriend and his mistress (Mickey O’Hagan) and exact some serious bitch-slapping.

The simplicity of the movie’s narrative does not imply that the screenplay is short on ideas, because “Tangerine” is primarily an observation piece, following around these two colorful personalities (and a few minor supporting players) in an ironic attempt to show us just what we have collectively relegated the transgender minority to in the present day. Throughout the course of their experiences, we never gather that they are prostitutes by choice; it is just a decision they have made because it is the only way they can make some money while looking after each other. The volatile nature of their personalities, meanwhile, is indicative of troubled pasts they have been forced to neutralize. When words come out of their mouth, there is no filter or shame in the severity of their analogies, as if long desensitized to the element of tact because harsh words have been their only defense against rigorous persecution. The most intriguing aspect of their journey is that their anatomical situations are, in some regard, a hot commodity for sexual desires for others. When the movie dispatches a foreign taxi driver named Razmik (Karren Karagulian) out onto the streets, he is far less interested in taking customers to specific locations than getting in the pants of lovely Alexandra, a regular of his who is more than happy to satisfy his cravings for the right price.

Somehow the director, Sean Baker, and his co-writer, Chris Bergoch, put a very convincing humorous spin on this material for most of the 88-minute running time, suggesting that their initial motives were not nearly as profound. Much of it is, even out of context, still a joy to watch. My favorite scene: when Sin-Dee finds the female hooker who has been messing with her man, she drags her out of a sexual encounter and onto the street, effectively holding her hostage until both of them can go and have a few words with the elusive Chester. The banter between them is sometimes so precious that it doesn’t even seem to be scripted. Given the opportunity to probe further with the actual writers, I’d wager much of the dialogue is actually improvised by the lead actors, both of whom are legitimate transgendered women who likely have inherited a lifetime of experience saying some of these colorful (if perceptive) things to those that cause irritating problems.

And then there are those two critical final minutes of the picture, which play like the most deliberate of icy splashes to our mental awareness. Was everything we had just seen an illusion? A farce? Or if possible, an elaborate ruse to bring us to a moment of insistent self-reflection? Upon further deliberation, I think the director’s intentions are littered throughout the movie already; his ending is simply the irrefutable culmination of that morose sense of value. In many respects, it’s also an affirming statement to how powerful people can be when they are not facing the harsh dangers alone. Sin-Dee and Alexandra spend much of the movie disagreeing and even estranged from one another, but when the chips are down in a moment of painful truth, they are united in their fight against the corrupt paradigm that would rather shift them into obscurity. “Tangerine” is not so much an endorsement of alternate lifestyles as much as it is a judgment against those who deny people their basic human rights. And considering where we have come and how far we still have to go in this fight of equality, it is exactly what we deserve.