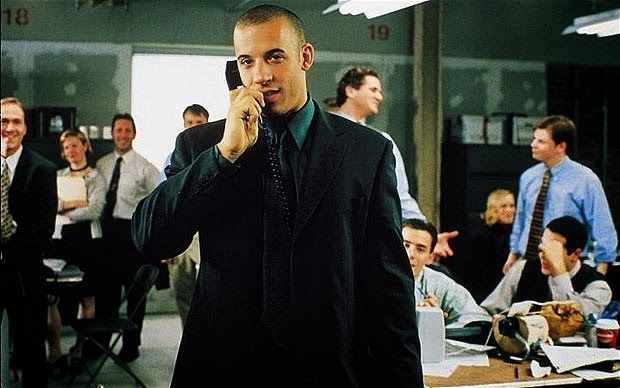 "Boiler Room" features an array of characters who watch movies like "Wall Street" and "Glengary Glenn Ross," and who strive for excellence in their careers even though greed and dishonesty are the only two things that influence their effort. These are among the most self-centered players seen in a movie for quite some time, brokers of a Long Island stock company who pounce on innocent buyers, sell them phony shares, collect the profits and actually get away with it. In a place where the only thing that matters is a paycheck, one expects lots of things to happen. Nothing is sadder, though, than seeing such promise dashed when the picture retreads to the obvious and borrows its energy from other films. This is exactly the kind of problem that plagues "Boiler Room"; its promising characters are completely eclipsed by the routine plot, which is so dreary and predictable that watching the events unfold becomes somewhat of a checklist.

Giovanni Ribisi plays Seth, a 19-year old who has just dropped out of college and is deluding his potential by handling an illegal casino. After pressured by his father to seek out work (though Seth would rather earn the dollar by simple manipulation instead of actually working for it), he goes in search of employment at a small brokerage firm called J.T. Marlin, which exists outside of Wall Street, but promises just as much success.

Seth's desire for wealth is certainly shared by many citizens, but hardly are those aspirations pursued or even imagined as reality. His attraction to the firm is the operations that go down behind closed doors--how brokers use the phone as a weapon, robbing poor innocent families of their salaries in exchange for stock that may not even exist. Of course these practices are illegal; after all, those who make a million dollars in just a few short years of their career without being an athlete are likely doing something illicit or dangerous. And yet the characters, not necessarily Seth, enjoy the prospect of criminal activity if only to get a hold of the dough; once he is welcomed into the firm, his curious eyes take him through an office that almost never sleeps. There is, of course, fascination with earning the money in illegal scams, but he observes everyone's ability to manipulate and betray stock buyers by with a ray of skepticism. In fact, the words of a broker played by Ben Affleck, which promise that he can make his first million in the first three years, seem to be his only comfort.

The real difference between Seth and his peers, perhaps, is the relationship he carries with his dad. The unfortunate beings of the boiler room itself are distanced from emotion completely; there are no out-of-business relationships, no family contacts, no joyous pleasures in life, and no need to be seen important by others. The office is the only life they know, and the word "failure" is not in their vocabulary.

Aside from getting its inspiration from "Wall Street" and "Glengary Glenn Ross" (as mentioned above), the characters are motivated with the same determination as those in "Fight Club," and have chemistry that feels reminiscent of "In The Company Of Men." Using these four films as the source for inspiration, though, "Boiler Room" becomes incredibly obvious long before there is any type of thickening in the internal conflict. Considering the talent aboard here (the movie also includes the rising star Vin Diesel), one would expect the actors to at least embody their characters with enough effort to stabilize the sloppy plot. Unfortunately the uncertain tone clouds their effectiveness; at certain moments the picture wants to be a drama, other times it lingers along the lines of a suspense thriller. The last act, which does its best to deliver a respectable resolution to this entire setup, is longer than necessary, and many of the interesting players drift off into the background.

"Boiler Room" could have been the first great movie of the 21st century. This is a drama that creates characters in fascinating ways and then dumps them into an orthodox plot without much to find amusing. Even the moments that work, particularly in the first half, feel out of place here; the story so relentlessly retreads to the obvious that even the successful parts are mulled down. A brief rewrite of certain twists could have changed the overall product, but no such luck. This is one of those movies that has been given the wings to fly, but chooses to curl up in the nest at all the most important moments.