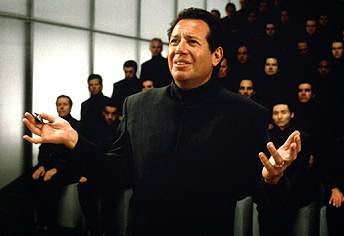 There is nothing sadder than seeing great screen actors squander their talent away in movies that are completely hopeless, and that is what we get with "What Planet Are You From?". How can one tell that the movie is irreparable? The idea itself is a good start--it features a planet dominated by men without sex organs, who plan on populating Earth with their own offspring in hopes that it will lead to some sort of Universal domination. It's the kind of idea that offends every form of human intelligence, and is one so dimwitted and miscalculated that, even if there had been script revisions, nothing solid could have possibly come out of the final concept.

Apparently, the cast that's been attached to the picture had faith in the idea, because their screen personas are played with such ambition that, for a few moments, we actually care about them. But the time spent with their charm is thin and sparse--the remainder of the film is one of the dumbest experiences one will have the entire year, wasted by flat jokes, corny structure, repetitive quirks and peculiar subplots.

The year is 2999, and a nameless planet off somewhere in space is filled with male clones. One of them named Harold (Gary Shandling) has been chosen to be the first to be sent down to Earth and impregnate a female in Phoenix during the year 2000. In order to do so, however, they are required to attach a penis to the gender-less being, making the alien's experiences with genitalia new and open for possibilities. And the filmmakers don't waste any time in holding back sex wisecracks with this plot detail; one of the movie's repeating jokes is a humming sound that emerges from the male anatomy every time a female bends over. But there isn't much importance with details to begin with, so we don't know if the penis is malfunctioning or simply gearing up.

Harold's unfortunate victim is Susan Hart-Anderson, a mild-mannered female played by Annette Bening. After Harold has already failed to attract the attention of many other women, Susan seems to be just the right match. Except a problem intervenes; she won't have sex until she is married. The predictable plot trap, then, demands that Harold whisk Susan off to Las Vegas to get married and have a long, involved Honeymoon.

Of course the simple-minded plot could not possibly maintain a running time over 100 minutes, so the script then dwells into new territory by introducing several different subplots--some have a slight edge, most of them are abandoned long before any type of compromise. The ones that generally pique our interest are those that feature familiar faces; there is one, for instance, featuring John Goodman as a government agent who is trying to track Harold down. Another features Linda Fiorentino as a vixen who is trying to get Harold to sleep with her even though he is married.

But where's the narrative ambition in all of this? Where's the intelligence? And why in the heck does a great director like Mike Nichols choose to make movies with such ill-conceived plots? Everyone thought he was on his way back to a golden road after 1998's "Primary Colors"--it was a smart, savvy, charming and funny political satire that, despite references to the much-publicized Clinton presidency, was a big hit with critics and moviegoers. Nichols could have done anything he wanted for his follow-up; how odd that he has chosen material without the edge, without the creativity, and without the wit of "Primary Colors."

Because 2000 has already been plagued by an endless supply of failures, "What Planet Are You From?" is certainly not the worst thing that has come out recently. But all the same, it falls somewhere in between "Reindeer Games" and "Mission To Mars" as one of the year's biggest misfires.