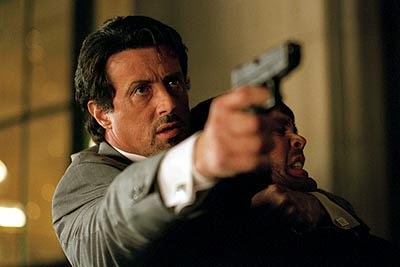 Remember that little running gag in the “Lethal Weapon” pictures where Danny Glover takes a deep breath after a physical stunt and announces that “he’s getting too old for this?” Perhaps Sylvester Stallone could take a study course on it. The now middle-aged but still-beefed up action star makes his anticipated return to the big screen from a three-year absence in “Get Carter,” with what one might assume is a departure role from his “Rambo”/“Rocky” days, but is actually no more than the routine, stamina-driven muscle man he has played throughout his career. The only significant difference this time around (other than the newly sophisticated wardrobe) is that the audience may have finally come to the realization of how tired and generic all of this really is. Stallone is a gifted actor in some aspects, no doubt, but is it possible to continuously take the same playing field without ever collapsing from exhaustion?

That’s not to say the movie he’s in is a total loss, though; if you strip the material of its ineffective level of performances, what we are left with is a concept that, at least at the core, is quite intriguing. In the movie, which is actually a loose remake of a 1971 film done by director Michael Hodges, Stallone plays Jack Carter, a mob enforcer, of sorts, who returns home from Vegas to the funeral of his brother, who "mysteriously" died just a few days before. The reports suggest a car accident; Jack, a man with the observance skills of a feline, suspects fowl play. But who could possibly be involved in his brother's demise? Eventually the choice has been brought down to three likely suspects, but anyone who has seen these kinds of films knows the formula all too well to be surprised at the identity of the real villain.

Alas, that is a goal that is eroded by a final act filled with inconclusive and peculiar resolutions. Towards the end, things begin to get very muddled and heavy, with surprise plot twists seeping through the cracks so densely that they practically choke the characters in half. And the action, while not totally overblown (in fact, it could be said there's less than you'd expect), is the routine, in-your-face stuff you've seen in a handful of previous Stallone films. I'm not saying the action is bad--just clichéd.

"Get Carter" is not a horrible film by any means—it has some terrific qualities: certainly more than I can say for the last Stallone picture "Cop Land" (which can now be known as the film that put a three-year halt on Sly's motion picture career). For example, the cinematography here brilliantly echoes "Payback," with its blue-tinted style and noirish atmosphere encompassing the narrative as if it were a narrator warning the viewer of the darker extents. It's just the timing and the execution of the movie that really nags us in the end. Should you see it? Only if you're a die-hard Stallone fanatic. Otherwise, it would be wiser to stick with the more interesting and exciting new Schwarzenegger flick, "The Sixth Day."