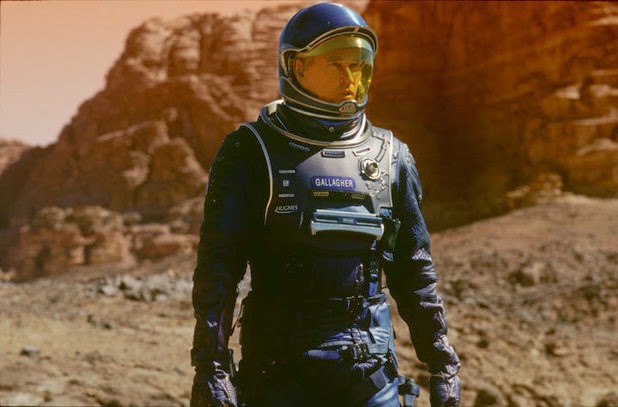 Movie blockbusters appear to be trapped in an endless, disheartening cycle in which almost every concept is often materialized in pairs, with both productions usually being released so close in time that a nagging sense of deja vu is usually present by the second time around. Evidence to support this has been too numerous to maintain, but among the chief examples of this are the concepts of volcanic disaster ("Dante's Peak" and "Volcano"), asteroids or meteors ("Deep Impact" and "Armageddon"), gooey creature features ("Phantoms" and "Deep Rising"), and most recently, perilous ventures against the forces of nature ("The Perfect Storm" and "Vertical Limit"). One notable but wasted concept under this rule is that of Mars exploration, in which ambitious filmmakers have foreseen mankind finally placing feet on the sand of that elusive red planet, then realizing just how complicated the matter can turn in to. The first film under this idea was released in early 2000 under the name of "Mission To Mars," which was directed by Brian DePalma and featured an ensemble cast that had the ferocity and willpower of your average football team. Now comes "Red Planet," which is being unleashed on a cinema where most members of the audience will likely be asking themselves, "is there really room for another film centered on the idea of Mars exploration?"

Under that umbrella, "Red Planet" almost surely faces a doomed future at the box office. But in comparison of the two films, this one is more like "Mission To Mars" on steroids, with the same compound structure implemented, but a sense of potency and effort that generates flavor, interest, and sometimes even genuine success (unlike the previous picture, which dwelled on things none of us had any interest in and complicated matters by building up to a disappointing payoff). But the picture, in the long hall, is not the great improvement over its predecessor that it could have been. Taking away the basic formula (humans taking steps on the surface of the deserted planet and then confronting dangerous perils), this is the kind of movie that has no interest in duplicating every single detail of a prior undertaking, but fails to realize that its own self-made ideas are not much of an improvement, either.

The story goes something like this: mankind's existence on Earth is growing endangered with each new breath, as population and pollution escalate beyond normal limits. The only hope is to set up a colony on another planet in the solar system. Mars is the prime target, but how can it be done? An ingenious idea allows deposits of algae and bacteria to be set up on the surface of the red planet, and that in turn will help produce oxygen, therefore creating an environment with the right conditions for living in. But the process backfires after twenty years or so, and a crew that consists of Commander Kate Bowman (Carrie-Anne Moss), Gallagher (Val Kilmer) and Ted Santen (Benjamin Bratt) is sent up there to investigate.

This is almost the obligatory setup of any movie dealing with elements of science fiction ("investigations" always usually uncover amazing or deadly findings, after all), but the script by Chuck Pfarrer and Jonathan Lemkin at least has given us a premise that implements the formula effectively. Is the concept of living on any other planet by use of algae at all possible in this reality? Probably not, but that doesn't undermine any of its merit as a fresh movie mechanism. A shame that other pictures, even better ones, aren't willing to be as creative with their approach.

The plot that follows, however, sets off a climax and resolution that echo the same sense of underwhelming pleasure that "Mission To Mars" does, and the characters that induce the plot's direction are so transparent in structure that we could line them up in a straight line and still see the wall on the other end. In addition, the cinematography is cold and messy, with shots being filmed at such monotonous tones and swiftness that there is difficulty in seeing exactly what is going on. Last but certainly not least are the movie's visuals, which are muddy and cold, and look as if they belong in cut scenes of the average computer game.

In weight of every flaw and virtue, however, I still find "Red Planet" a little more convincing and plausible than its predecessor, even if it is not enough reason to actually recommend the follow-up either. The key to that result is in the efforts to create a unique, bizarre but ideal premise for the remainder of the material. Its just a shame the rest of the material itself didn't share in the same enthusiasm as the setup did.