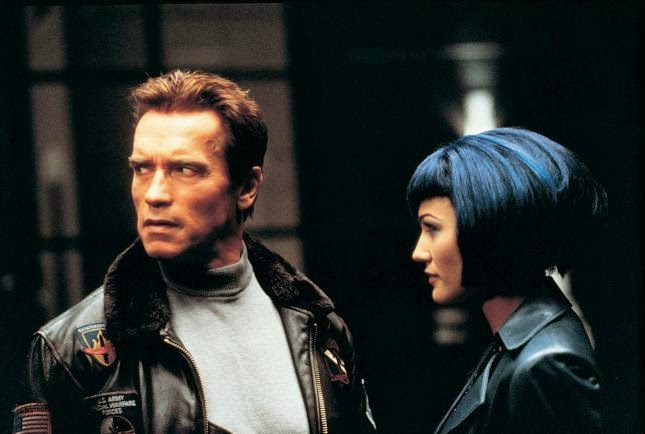 Science has made broad leaps in allowing humans to do what they want to the Earth and its resources, but nothing quite as powerful as the process of cloning living organisms. We've read in newspapers and seen on television of how it is now possible for scientists to actually clone adult sheep, practically duplicating them without any fanfare or elaborate experimentation. But the process, needless to say, has been attacked even before it was technically possible, mostly by people who are concerned that mankind may be digging its own grave by practicing things it has no right to do. Now the concerns grow thicker day by day, as scientists ever-so-steadily creep towards the moment when they are able to successfully duplicate an actual human.

In "The Sixth Day," a movie where such experimentation is now completely possible, laws have been established that forbid the cloning of human beings, despite the fact that the process can still be lawfully implemented with animals and plants. The reasoning displayed by the movie's plot is similar to that of the arguments that go on in our own reality: altering the essential cycle of life may very well be a power that mankind should have no authority over. There are other issues to contemplate as well, such as the notion that unnaturally-conceived organisms have no souls, or aren't even real beings. With no specific answers to any of these concerns, performing such experiments is simply too risky to attempt.

Cloning humans is what the Supreme Court has designated a "Sixth Day Violation," which can lead to jail time and even more serious forms of punishment if discovered (the "sixth day" reference is taken out of the biblical context, incidentally). But behind the shadows, these experiments actually do go on, in a secret lab that is operated by Dr. Weir (Robert Duvall) and enforced by rich CEO Michael Drucker (Tony Goldwyn). In just a few easy steps and little amounts of time, practically any human being can be successfully cloned; the problem is, cloning is less identifiable when the original model is deceased, and when the alive-and-well helicopter pilot Adam Gibson (Arnold Schwarzenegger) returns home to his wife and sees a replica of himself assuming his role, the underground cloning establishment panics and sets out to eliminate one of the two men before the lid on their illegal operation is blown off.

Like a similar identity blockbuster named "Total Recall," "The Sixth Day" is an effective action feature because of how well it is packaged: with coherent action, exciting chases, clever twists and intriguing payoffs. The script written by Cormac and Marianne Wibberley has a certain introspective feel to it, but doesn't hesitate to exaggerate certain details and leave out others for the benefit of maintaining your typical blockbuster formula. Schwarzenegger and his fellow comrades, namely Duvall and Goldwyn, also have considerable fun here, diving headfirst into the material and paddling enough ferocity to keep the viewers not only interested in the subtext, but in the characters as well.

Unfortunately, like most of the other Schwarzenegger flicks, sometimes the action elements can get drastically overplayed. There are three sequences that I am instantly reminded of here in which the element of fun is halted and replaced with disbelief, particularly because they are not just overproduced, but absurdly realized and crafted. The sound effects, likewise, are increasingly annoying; why is it that filmmakers frequently see the need to break eardrums in the process of striking us with complicated action scenes? It's not as if we can't hear what's going on. Turn the volume down already.

But there is no need to mull over the disadvantages here for long. "The Sixth Day" is what it is: an absorbing, compelling and fascinating studio effort that would have undoubtedly been seen in a more appreciative light had it been released during summer, when most of the competition was merely crap. Because it is being released among the ranks of the more insightful, thought-provoking series of movies this fall, the picture will likely be viewed under less of an enthusiastic scope. That shouldn't prevent anyone from still having a good time, though.