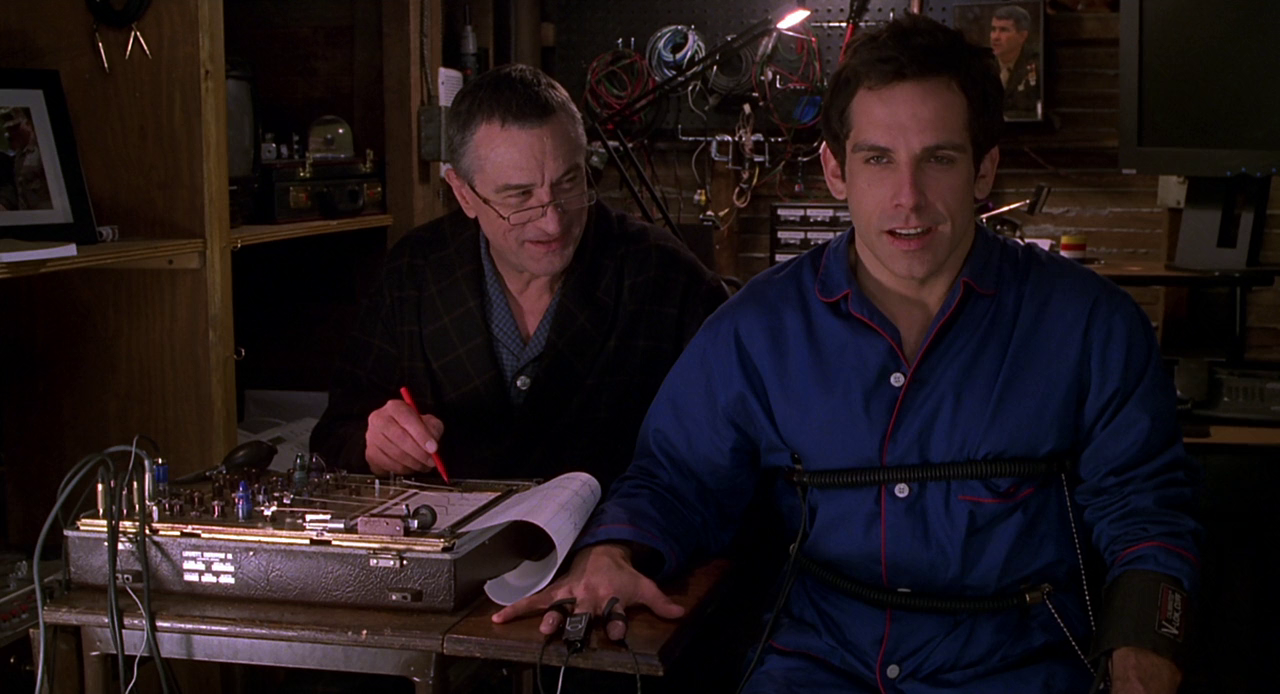 Imagining "Meet The Parents" without the brilliantly enticing comedy antics of Ben Stiller is like picturing "Aladdin" without the Robin Williams Genie. He's not just the funniest part of the picture; he's the backbone as well. Those who are solely concerned with the presence of actor Robert De Niro might be a little bewildered with that proclamation; after all, the latter has so much more potential on screen, especially in comedies (even though his two most recent, "The Adventures Of Rocky And Bullwinkle" and "Analyze This," are shameful trash). And yet this is not a big surprise by any standard, because in the recent years, we as moviegoers have seen Stiller thrive under the influence of bad taste, embarrassment, satire and physical comedy as if he were made for it. Case in point, the man may actually deserve comparisons to the greater comedians of cinema's past.

Take the situation at hand in "Meet The Parents" and you'll understand the reasoning. Here, Stiller plays Greg Focker, a nurse from Chicago who is just about ready to pop the question to his girl Pam (Teri Polo)—that is, until he learns that her sister's fiancee first took a traditional (but perhaps more effective) route by asking the father first. Pam then suggests taking a trip up to her folks' New York home in preparation for her sister's wedding, which Greg unwittingly accepts.

The greatest pressure on any man is meeting the girl's parents, and Greg's fears are realized when a sense of tension builds between he and the girl's father. Here, daddy dearest is Jack Byrnes (De Niro), a former CIA profiler who's as tough as nails and twice as sharp. Soon the stage is set for a deterioration of potential relations, undermining the opportunity for Greg to successfully win over the admiration of Jack before he has a chance to ask for his daughter's hand in marriage There is one such scene that sparks a massive chuckle when a Champaign cork is popped, a urn with ashes from a deceased relative falls and breaks, and the family cat uses the ashes as its own personal liter box. The reaction on everyone's faces alone is a riot.

The movie was directed by Jay Roach, who obviously knows a lot about the antics of practically any form of humor, given his experience from working with Mike Meyers on the two "Austin Powers" flicks. Here he adopts all sorts of levels of humor that will appeal to practically any audience: sex, witty repartee, physical jokes, and even irony, among other things. The chemistry between De Niro and Stiller provides secondary humor during slower moments, as Greg worries about pleasing his potential father-in-law, and Jack cutting the guy off at the pass of every minor detail (one incident being that Jack decides Greg is lying about a lot of things, and he administers a polygraph test to ensure the truth of certain matters). Even though some of the jokes don't actually work as well as the writers hoped they would, the execution and timing of the movie's whole tone is almost never misjudged.

The big downside to all of this is the issue of character development; because the movie is carried by Stiller's front-burner performance, the script administers most of its concern on him and seldom on other potentially meaningful personas. Pam is the biggest concern here, because we don't really understand why Greg is so head-over-heels in love with her. What are the reasons? And most importantly, what are her reasons for loving him back? Certain details of minor characters are fuzzy as well, which only adds to the pressure of feeling like we're sifting through a pile of wasted characterizations.

There are a lot of other quibbles revolving around the film, but most are so small in comparison that there really is no need to dive into them. The important matter here is that "Meet The Parents" is highly amusing, utilizing a concept that sparkles with energy and laughter, and at times leaves most of the men in the audience throwing their heads back and realizing exactly how realistic the situation at hand is. And as a new entry on Ben Stiller's resume, the picture more than anchors down his significance as a comedy actor, even if the jokes themselves are a tad less laughter-inducing than those of "There's Something About Mary" and "Keeping The Faith."