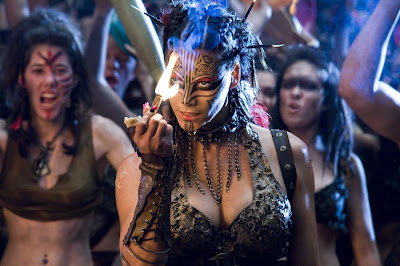 Neil Marshall’s “Doomsday” is a Whitman’s sampler of bizarre story ideas and visual gimmicks, congealing around a premise that is so straightforward that it affords them no groundwork for stability or realization. And that’s a sad reality, because the director’s prior professional outing, “The Descent,” snuck up on unsuspecting moviegoers and emerged as one of the most effective horror movies of the past ten years. In that film, characters that are oblivious to terror go cave exploring and are forced to endure survival at the hands of natural dangers while potential supernatural forces reveal themselves. Here, the perspective of the screenplay is not so different… except you get the sense that everyone involved never bothered reading through an initial script treatment, and instead placed their faith on a man who has shown he is capable of genuine entertainment at the movie theater, but apparently lacks the judgment skill to be consistent in that conviction.

The key to successful directing in a story like this is rhythm and pace, both of which elevated his preceding feature to greatness. “Doomsday” offers none of that; it is haphazard, muddled, and so occupied with the blatant misuse of a genre-bending mentality that it infuriates us on countless levels. The story itself is simple enough: Britain is in the middle of turmoil caused by the outbreak of a deadly contagion referred to as the “Reaper Virus,” and new conflicts that emerge following initial containment force the government to infiltrate previously quarantined areas in hopes of finding a cure. Encounters with survivors in the movie show that they have all adopted personal styles that are dissonant with both the time period and the conflict, and the picture bounces between these so repeatedly, it plays like three or four completely different movies strung together after an explosion in an editing room.

The main character is Eden Sinclair (Rhona Mitra), a military operative who walks through scenes like she is channeling Kate Beckinsale in the “Underworld” pictures – there’s a low rumble of acknowledgment in her deeply uninterested voice, and the front of her hair hides her eyes. In the prologue, Eden is only a young child who, after critically injuring her left eye, is whisked away aboard a military helicopter that is vacating a quarantine site on the island. The movie elaborates this twist beyond your conventional evacuation tactics by supplying the government with enough funds to build an impenetrable wall separating the country into two halves: one for the infected (or soon-to-be, I suppose), and the other for those that are, we suspect, wealthy or privileged.

Nearly 30 years pass, and all thoughts of the deadly outbreak are nearly a distant memory when Eden is summoned by her boss, Bill Nelson (Bob Hoskins), for an important mission that would potentially send her back into the quarantine zone. The Reaper virus, now thought to be just a distant memory, has appeared again, and this time on their very side of the wall. Any possibility of containment from the new outbreak rests on the dogged hope that someone in the earlier infected zones might have found a cure for said disease, which is fueled further by radar images showing said territories populated by apparent survivors. A smarmy government advisor named Michael Canaris (David O’Hara) suspects the cure lies in the hands of Kane (Malcolm McDowell), a doctor who was studying the virus and then supposedly stayed behind in ground zero (not voluntarily, I’m sure) when the evacuations commenced. The mission: descend into ground zero and acquire the cure within 48 hours of deployment, or their existence to the free world ceases to be a priority to the British government.

The undertaking requires an array of quirky and wisecracking characters to be assembled, which has become the narrative ploy of these types of pictures as far back as James Cameron’s “Aliens.” What I did not suspect, especially so early in the picture, is for virtually all of them – save for the Eden character – to be upstaged by a band of cannibalistic survivors that behave as if barbarians in dark times. In the movie’s first encounter with them, the military operatives are chased around, set on fire, shot at with arrows and are even hacked to pieces by these very unpleasant people, in a series of sequences that would make Mad Max wince. The kicker? All of these survivors dress like groupies to a Sex Pistols concert, and walk through space behaving like participants in a sexual fetish ball.

That is not even the worst offense the movie makes with its rule bending. Following a collection of scenes in which the remaining operatives are beaten, laughed at and chased into hiding, the group of survivors is taken off-course into yet another area of the countryside in a last-ditch attempt to find Kane, which yields equally bizarre results. Kane and his close troupe of guards, it turns out, are now living in an abandoned castle overlooking the sea, and have adopted a more medieval style in appearance and defense. In both cases, the group of searchers is welcomed not with warm embrace buy rather absolute fury. For Kane in particular, their arrival represents a naïve audacity on part of his former government that should be answered with violence and sacrifice – similar to how the government treated the infected during their massive evacuation period. Caught in the middle of this is the Eden character, a calm but brooding sort who maintains composure in the face of every crazy circumstance that is thrown at her. She even has a nifty camera device imbedded into her glass eye, which is then linked to a video screen on her watch that grants her – and therefore the audience – visual access into all sorts of intriguing story developments. I liked her, though I did not envy her position. How could you, really? Take away the beatings, outrunning crazy cannibals and blatant attempts at public sacrifice, somehow she manages to keep a straight face longer than we ever could.

No two moments of the movie are the same, in texture or in purpose. There are elements here of political drama, military action film and post-apocalyptic morality play, punctuated further by car chases and wild shootouts that would be better suited in a James Bond picture. By imploring these approaches in style, among others, Marshall I suspect is trying to emphasize how a populace can revert back to primal instinct in the face of apocalyptic fate, even in times of great social advancement. But the movie executes these acts in such a cold and one-dimensional manner that it offers no substantial commentary to the argument. Furthermore, none of the characters in the movie that could be portrayed as victims have a single redeeming quality, and Kane’s own pseudo-survivalist approach, which serves as the film’s ultimate thesis, plays like a fascist’s rhetoric on evolution.

“Doomsday” is simply infuriating. It is infuriating because it wants to say too many things, has no central purpose, draws characters that are ridiculous and over the top, and spends too much time travelling to all corners of the map without settling on a primary location first. There is no doubt that we are dealing with a director here who is fully capable of accomplishing something lasting and profound with this kind of material. Next time, he just has to remember that it’s not necessary to throw everything at us but the kitchen sink.