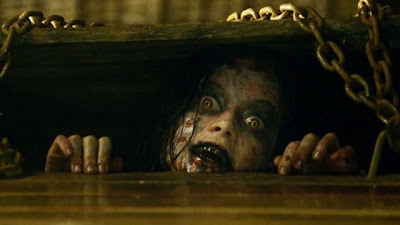 Deep in the woods underneath a rickety old cabin lies a weapon of great chaos and suffering. A potent stench of death acts as a wall against would-be adventurers, and corpses of cats line the basement ceiling as darker warnings to those willing to abandon all reason. At the end of the room, a bulky book seemingly made of flesh is wrapped in plastic and barbed wire, and its presence is of such chilling proportions that it inspires the soundtrack to reverberate lowly across the theater speakers. Inside, anxious scribbles serve as a last-ditch plea: “Leave this book alone.” But anyone who has ever made a horror movie, or more importantly seen one, knows how fool-hearted such declarations are when in the face of naïve 20-somethings who all wander away from civilization. Words are spoken out loud by one such moron, and a great presence of evil is awakened in the woods whose mission becomes clear right from the start: possess the five one by one in succession, corrupt their souls and mutilate their bodies, and open a gateway that will allow hell to overtake the world and consume it in eternal damnation.

And so goes the story of this, the remake of “Evil Dead,” and countless other horror films over the course of the last three decades that begin with the formula of dispatching kids in a place where they are cut off from society, and end with nearly all of them sacrificed in a vicious and painful manner. Maybe I am just getting too old for this stuff. Once in a not too distant time, this did not feel like such disposable material. Older films, while intensely brutal, worked on a revolving scale where visuals were either understated enough to cause genuine tension, or so over-the-top that their absurdity merited certain amusement. But that was also an era of technical limits, which meant there was only so much we could be unnerved by; nowadays, for better or worse, the slicing and dicing looks beyond realistic, negating any opportunity to suspend disbelief. The sad trend with this reality is that new filmmakers freely exploit such notions to standards so extreme that they have given birth to a subgenre of literal torture porn, where movies now freely sabotage the idea of noteworthy scares and suggestions in exchange for a reprehensible sense of hopelessness.

This modern update, produced by the same group that did the original picture, is alas cut from the same bloody cloth that continues to damage any sense of remaining cinematic dignity. Its source material was perhaps more famous than it needed to be: the original movie, which was the landmark endeavor for Sam Raimi, was enjoyable genre-bending fodder that inspired as many laughs as moments of fright, but it was hardly in a class of great entertainment like “A Nightmare on Elm Street” or “Halloween.” The producers, nonetheless, saw enough value in the vehicle to inspire the need for this renovation, which makes full blatant use of the boundless visual opportunities now available to audacious filmmakers. Alas, the subtext of humor is distinctively absent, resulting in just another exercise in overzealous slaughter that wears out its welcome long before the 91-minute running time is complete.

The story concerns two siblings long separated by grave family circumstances: Mia (Jane Levy), a woman dealing with drug addictions who sees a weekend at a cabin as a good motivator for sobering up, and her brother David (Shiloh Fernandez), who has been absent from her life but emerges from dormancy for the sake of assisting her. Together, they are accompanied into the woods at a remote cabin with David’s girlfriend Natalie (Elizabeth Blackmore), who speaks only when necessary to the plot, Olivia (Jessica Lucas), a nurse who can be on standby for Mia’s inevitable detox, and Eric (Lou Taylor Pucci), the token idiot of the screenplay whose curiosity will cause all five of them great pain and countless bloodcurdling screams. I always hate it when the movie brings along the obvious stupid one, don’t you?

These circumstances, at least set up with some level of concern on part of observant writers, are still undermined by a visual style that insists on ramping up every perverse insinuation possible. Some of it is also too obvious to feel acceptable. The woods that the characters descend into are so gnarled and twisted that they practically exude the stench of something menacing. The cabin has an exterior that would not suggest great memories. And if that isn’t all clear enough, the basement is such a deliberate warning against inquisitiveness that it only stresses the limited mental capacity of all five of its characters, each of whom seem to exist in a parallel universe bereft of opportunities to see horror films.

You know this routine well. The scene is dark, a noise is heard outside (or in the other room), and one person goes to investigate alone. When they find nothing, they turn to go away and are attacked by something that is at first unfocused. Sometimes they run and scream, other times they are caught and killed quite abruptly. The added effect to a movie with satanic implications is that the unseen force moving through the house can take possession of each person without us physically seeing so, and their facial expressions change gradually from painful to menacing and the force gains power over their will. A well-paced display of this kind of change is what made “The Exorcist” such a remarkable horror film; here, the changes are made too quickly to hit an effective psychological target, and they always cut directly to another macabre sequence involving sharp objects and torn skin.

My patience with this genre is not entirely adrift. Eli Roth’s “Hostel,” perhaps the darkest and cruelest of these new age slashers, was driven by believable performances and a substantial setup that was effective at setting a grim tone. The first two “Saw” movies, meanwhile, exploited the gruesome possibilities with an intricate psychological twist but also knew how to walk the line without entirely diving over it – something that the later sequels entirely abandoned. The problem with “Evil Dead” is that it accepts this invisible line as an obliterated concept, and never attempts to pull back long enough for anyone to catch their breath. The director, Fede Alvarez, is clearly a fan of this material based on his sheer enthusiasm for it, but what really inspires him beyond the extreme pain and suffering required of the visuals? Here is a movie that plays all the notes without ever knowing the music.