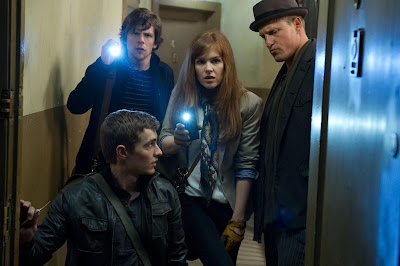 Stage magic is the plot device of a thousand outcomes. The utter chutzpah of showmen whose elaborate tricks become the crux of a movie screenplay routinely come with the same predicament as magic shows themselves, which is that the overreaching effect can easily be offset by implausibility if the material on display lacks focus, or fails to exploit any possible sense of wonderment. The “magic” on display, too, must inspire us to think about their mechanics and execution; because tricks are designed as momentary thrills, they only resonate if the audience is bathed in their intrigue. When the ingredients come together successfully, you get films like “The Prestige” or “The Illusionist” – endeavors that work well from the narrative context while at the same being thought-provoking entertainment. On the flip side of the coin, you can get something as ludicrous as “The Incredible Burt Wonderstone,” which cares nothing about the craft and uses it as a cheap tool to propel much less interesting ideas and laughs.

“Now You See Me,” the latest of these endeavors, is surprisingly delightful audience entertainment, unburdened by overzealous special effects and loud soundtrack cues and driven by a story that, well, just likes the idea of being smart. In a movie climate where every other thriller or action film is driven by a need to overachieve on surface values, this is more remarkable than refreshing; especially surprising, furthermore, is the notion that the movie establishes a certain skillful pacing with its secrets, only revealing enough in stages so that viewers are on the same track as the characters. In separate quarters, writer Ed Solomon and director Louise Leterrier have checkered pasts in the movies, ranging from passable escapist entertainment to underwhelming misfires. Here, they have tapped into an undeniable chemistry that elevates their mutual enthusiasm. The result is a lot more fun than it probably has the right to be.

The film’s leads are actually not the magicians; they are, however, the backbone for which every crucial detail and move is made throughout the story. As the movie opens, we meet all four of them in isolated sequences: J. Daniel Atlas (Jesse Eisenberg) performs an elaborate card trick that finishes with offbeat fanfare; Merrit McKinney (Woody Harrelson) uses hypnosis and mind reading as vindictive tools against a man hiding naughty secrets from his wife; Jack Wilder (Dave Franco) employs generic sleight of hand deceits to pull attention away from a more sordid agenda (namely, that he is actually a clever pickpocket); and Henley Reeves (Isla Fisher) puts an intriguing spin on a famous water chamber escape involving piranhas. The four seemingly unrelated stage manipulators are then summoned quite quickly to a seedy hotel room following their brief introductions. Who has asked all four to come? And for what purpose are they there? The movie intentionally does not make these points clear; instead, it gives them just a brief glimpse into something potentially dynamic, and then fast forwards a year in order to keep the mystery hidden for a while longer.

The following year, the quartet of magicians is now a touring ensemble known as the Four Horsemen, putting on wide-scale magic shows in places like Vegas and combining their distinct skills to create even more lively circumstances for illusions. The finale of their first show is the narrative hook that fuels the intrigue; after selecting a volunteer, they perform an elaborate act that suggests their guinea pig is transported thousands of miles away into a secret bank vault containing millions of dollars in cash, and all of it will wind up in the hands of the audience before the act is over. The audience does not buy that this is authentic bank robbery; however, in concluding scenes, we observe bank authorities opening the same vault, and finding their existing mountain of money completely depleted, with no obvious signs of forced entry.

As is the case with all authentic stage magic, however, there is always an explanation rooted in reality. The screenplay provides its outlet in Thaddeus Bradley (Morgan Freeman), a “reformed” magician who now makes his money on cable television exposing the inner-workings of all those elaborate deceptions you see in mainstream stage shows. As the tricks intensify and begin to acquire the attention of perplexed legal authorities, Thaddeus is more than happy to peel away the farce, perhaps more for his own ego enhancement than actually helping federal authorities. This does, nevertheless, make him valuable to Detective Dylan Rhoades (Mark Ruffalo), who has been assigned to the investigation and tails the four performers on a cross-country excursion where each of their feats blur the lines between entertainment and illegal activity. Also caught in the middle of their duplicity is Alma Dray (Melanie Laurent), an agent from foreign affairs assigned as Rhoades’ partner to help unravel the elaborate international heists, and Arthur Tressler (Michael Caine), a wealthy business man who funds the Horseman act, but may be too close to the source to see that he, too, may just be another target in the crosshairs of these agenda-driven magic shows.

Most of the fun, I think, lies in dialogue exchanges. Consider a scene early on after the first bank robbery has occurred, and the detective yanks the four culprits in for questioning about the missing money from the Swiss bank vault. The primary exchange occurs between him and the Horsemen’s primary spokesman, the Daniel Atlas character. “The first thing about magic,” he says, “is to always be the smartest guy in the room.” And so he is here, tap-dancing circles around a grilling interrogation that acts as a series of traps designed to trip him up, even though he is secretly ahead of them. We suspect this is not a difficult feat for Jesse Eisenberg, who was brilliant in “The Social Network” and again here reiterates why his presence has so much electricity: he is a master at oratory, often delivering the lines with such mild-mannered assurance you imagine he might be laughing on the inside. The lines hardly even feel preconceived; I suspect that in early script readings, it would not be too far-fetched to assume he would toss pages off to the side and ad-lib the material. Actors like him were made for this style of clever, almost improvised verbosity.

The majority of the players are critical in the elaborate series of chess moves concocted by the plot, but to retain the mystique of the magicians it also requires the focal point to occasionally drift a step back. Here is where the movie makes its most unfortunate misstep: by relying on a subplot revolved around the bumbling detective and his mild-mannered partner, and the two develop a physical attraction that is barely kept at bay. Aside from the sheer formulaic approach, neither Ruffalo nor Laurent have enough chemistry with one another to warrant such an arc; she is stern and calculated without any prospect of engagement, and he is labored by an incompetent characterization that forces us to question his very credentials as law enforcement. The approach would have made more sense in capitalizing on the development of the Freeman and Caine characters, both of whom have one crucial exchange with one another early on in the film that is delightfully tense. Perhaps it helps that both veterans are far more capable actors in their adaptability on screen, but hey, if you have the resources at your disposal, then I say exploit them.

Mediocre subplot aside, there is a lot of fun things going on in “Now You See Me.” The movie is saturated in shades of conflict, and does not always resort to chases or explosions to advance them. I love how minor characters all have their own agendas, further blurring the primary mystery by requiring an occasional narrative detour. And despite the fact that they are hardly three-dimensional, I admired the four magicians, all of whom are clearly modeled by style rather than personality, but exist with enough clarity to still keep us interested in their enigmatic drive. The final reveal, which comes at the height of a clever climax, is so carefully peeled back that it surprises even them. But that’s the thrill of their predicament, too; being the smartest guy in the room, after all, means nothing if you have the misplaced arrogance to assume the room isn’t larger than it looks.

A very well and thought out review. I will be reading more.