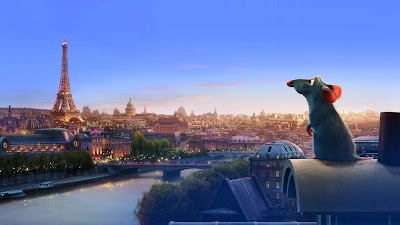 It was no small feat to feign enthusiasm at the prospect of Walt Disney Pictures acquiring ownership of Pixar Animation, especially on the eve of the release of “Ratatouille.” After a string of successes on part of the CGI-geared cartoonists – all of whom had nearly full creative ownership of all their stories and images prior to Disney’s distributing of them – the idea that the future material of this immensely successful studio would be under direct guidance of the gargantuan Mouse House corporation felt, well, like an uncertain reality. For the company whose founder gave birth to the medium of feature animation, this prospect is dismaying, and underscores a surprisingly underwhelming trend of in-house animated endeavors in the recent years, which seems fueled less by creative desires and more by mass marketing potential (save for “Treasure Planet,” which was full of wondrous ideas but failed commercially because of its narrow appeal). The question then becomes, how can the consistency on part of the Pixar name possibly keep up, especially in the hands of a system now long absolved to settling for the median in this genre?

If those reservations persist, however, then no one, including me, recalled them during the screening for “Ratatouille,” which arrives with little fanfare compared to the studio’s prior outings. Much to our surprise, those misgivings are completely unwarranted in context with the material. Here is not only yet another great entertainment from the same studio that yielded “Finding Nemo” and “The Incredibles,” but an ambitious excursion into the world of French culture and cuisine that would surprise even die-hard movie buffs. As such, the long-standing trend of animated movies appealing to more than just children endures to remarkable levels with this movie: kids will no doubt be enraptured by the brightness of the visuals and charm of its small characters, while grown-ups will find delight in the exploits of the culinary world as well as the varying nods to history and pop culture that are scattered across the canvas. If Disney has learned an important lesson from their recent checkered past in this medium, they have clearly found the best time to learn from it.

The hero of the film is Remy (voiced by Patton Oswalt), a rat living in the French countryside who threatens the safety of his nest when he is possessed by an initiative to explore and indulge in the fine art of food preparation. Remy, it seems, is gifted with a sense that far exceeds the abilities of his fellow rats: a nose that knows the difference between fresh food and garbage. Rodents, alas, are delegated to a lowly spot on the food chain that forces them to settle for whatever they can find, and such a prospect acts as an immovable force against an unstoppable desire that propels Remy, who can not only identify tastes and flavors with certain linguistic flair but also knows how to combine them into luscious calculations. This would certainly please his cooking idol, chef Gusteau (Brad Garrett), who inspires the ambitious rat early on through presence on a nearby television set, beckoning watchers with one simple mantra: “Anyone can cook.”

And indeed, it seems, anyone can. Remy’s abilities are tested when a narrow escape from a countryside cottage sends him downstream through the sewers of Paris, ending directly under Gusteau’s own restaurant. There, a clumsy young janitor named Linguini (Lou Romano) tips over a pot of soup on the stove and secretly tries to prevent anyone noticing by tossing in random nearby ingredients. Remy instinctually wanders nearby to inspect. His nose detects immediate worry: the soup is now a shamble of diverged flavors. The hustle and bustle of a busy kitchen allows the workspace to go relatively unnoticed, thankfully, and the rat begins experimenting: a little rosemary, a little onion, a hint of garlic, etcetera. A satisfactory result is tested by an important food critic in the dining room, who compliments the dish beyond what the flailing restaurant has become used to. But who is to thank? No one would suspect a lowly rodent for being responsible for the perfection of the soup, even though his antics are observed with certain shock by Linguini, who so clearly destroyed the original result. Fellow cooks make the assumption that it is the janitor who possesses a secret talent for culinary arts, and it elevates him into a role that becomes crucial for the newfound attention on Gusteau’s name. Can this young, uncertain kid really help the restaurant regain some of its original fame? And furthermore, how can he hope to compete without letting anyone in on the secret of the rat being the true talent behind the food’s immense success?

The movie creates a working relationship between Linguini and Remy that is unorthodox, and yet remarkable by any movie standard. Neither can speak to one another, obviously, but through gesture (and a very creative shtick involving the kid’s hair as a euphemism for puppet strings), they create a level of communication that is admirable in the way it speaks to teamwork without so much as a word being understood. Like most movie animals, Remy can, in fact, talk, but only other animals – namely, his family of rats – are privileged enough to gain insight into his perspective. Borrowing from the arc long established by “Pinocchio,” the lead is also gifted with a conscience in the form of the great chef that inspires him, who may be long dead and gone but is no less jolly in his observations, especially in the kitchen. The dynamics are intricate, and each crucial relationship affects a certain facet in the screenplay, which will inevitably end with the most notorious of food critics, Anton Ego (Peter O’Toole), showing up to assess the newfound success of Gusteau’s crew of young aspiring cooks. Alas, the path to a happy ending is burdened by questions of loyalty between the kid and his “little chef,” whose family wants access into the restaurant’s food pantry, and whose existence in a food establishment will of course send up all kinds of additional sirens in the field of health inspection. That the movie paints these details in intricate, ambitious strokes is a testament to the continued flawless timing of movie animators and writers.

Also continuing the tradition of impeccable quality in animation, “Ratatouille” looks and feels just as breathtaking as the best moments of “Finding Nemo” or “A Bug’s Life,” trapping its characters in a world that comes dangerously close to bridging the gap from animation to live action with its sense of precision, yet staying far enough on this side to allow for great escapism on part of its young audiences. The level of detail in minor things, such as the hair follicles on Remy’s back which seem to move independently of one another, do not suggest that the workload on animators is simplifying by any means, but rather getting more complex. The technology, perhaps, may be more readily available and allow for streamlining of process, but it intensifies the scope of the canvas as well, allowing these creative filmmakers to paint their portraits with much finer and more precise strokes. So, too, do the human characters look more human than before this time around. What a scary prospect to see what such things would look like in film two decades from now, when the horizons will no doubt extend beyond where they currently are. Does animation risk losing its perspective in favor of abolishing the cinematic barrier between this world and ours? I don’t suspect so, but I imagine the discussions will intensify the closer it comes to dancing those lines.

If there is any weakness in “Ratatouille,” it comes down to the climax, which simply cannot satisfy all of the story requirements that are established by the varying conflicts coming to a head in the film’s final twenty minutes. It feels like an unfair bow-out. Then again, how could there be any other outcome? – rodents are alas bound by a logistic standard that exists even in cartoon worlds, and any level of success that can be reaped in the end will inevitably be short-lived once inspectors come to call. But I suppose this isn’t the kind of movie that is entirely focused on the payout, either; if it was, the action would be more intense, and the plot would require a lot more fanfare in its overall execution. The genius of this film, oddly enough, lies in what it does not do: rely entirely on the formula of flashy light and color instead of intricate characterizations and precise dialogue. This perhaps makes it the smartest of the Pixar pictures, and no doubt the most insightful. The Disney formula of ambitious characters finding their place in a world that ignores them is always intricately weaving its way through the fabric of their movies, but here it arrives in the middle of a story that is ambitious, charming, and unburdened by the notion of going down a conventional road. “Ratatouille” follows the pattern of dazzling entertainment set long before by the first “Toy Story” picture, but elevates it to something more resounding than just a routine cartoon adventure with colorful characters or sight gags.