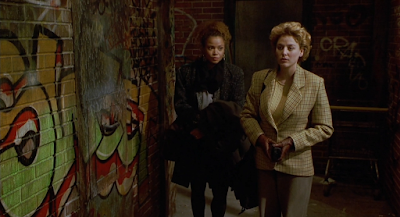 The opening shot of “Candyman” drips with the devious enthusiasm of a great ghost story. During a rather intricate voice-over that suggests ominous meaning for doubters of an urban legend, the sky behind the cityscape of Chicago is seen filling with swarms of bees – a jarring shadow cast over civilized procedure. They symbolize something foreboding: specifically the coming of an entity that once fell victim to them, a young black man at the end of the 19th century whose love affair with a white girl resulted in his merciless death at the hands of violent racists. Those are details that come to light, however, in an investigation nowhere near as compelling as the establishing visuals portray it; told in a style of filmmaking that doubles down as an investigative mystery, what we eventually find ourselves joining in on is an excursion through the lurid nightmares of the low end of the class system, a parable about how belief in the impossible allows it to become an applicable facet of fear and suffering in the modern world. And yet the movie never really has an understanding on what the real evil should be: the villainous visage standing in the shadows, or the social elements that have given him power over the meek and superstitious.

The story, as it goes, begins with a riddle not unlike the one that precedes the legend of Freddy Krueger or Jason Vorhees – if you say the Candyman’s name five times in a mirror, he will appear behind you, breathing down your neck before a hook rips you open from end to end. Less credulous sorts see such warnings as the stuff of temptations, however, and in an early scene there is a recount of a teenage girl being murdered in her bathroom (not to mention a boyfriend whose hair turned white when he walked in on her severed corpse). This intriguing account – a tale accepted by believers in the legend as much more than a sordid folklore – is propelled further by the investigative nature of Helen Lyle (Virginia Madsen) and her colleague Bernadette (Kasi Lemmons), two college researchers who hear the account and are compelled to dig further. Eventually those desires take them to a newspaper morgue and right into headlines about a woman who was mysterious murdered at a housing project in Cabrini Green (the site of his own murder a century before). Inconclusive details suggest that it was patterned after several similar killings in the area, but was it a serial murderer who slaughtered the poor woman, or was it the notorious Candyman, whom locals have accepted as the menace in the distance? Their fear and uncertainty is further reflected in the complacence of a disinterested legal system; cops called to the scene of the homicide never showed up, no doubt because it was occurring in an environment where the perception of livelihood has been driven by negative stereotypes.

The movie freely indicts both the system and the image of a boogeyman, not always in that order. Helen is certain that there are logical explanations for these sorts of murders, and digs with all the audacity of a great federal government agent hot on the heels of a lead. A neighbor of the victim (Vanessa Williams) believes wholeheartedly in the old stories; her warnings play as assertive pleas to abandon the search (“you shouldn’t be here”), while others – including a young boy in the same building – push the myth further by offering vivid details (including a story about a kid slaughtered in a public bathroom just across the street). And in the midst of these searches for answers is a home life that only propels Helen’s interest in other avenues; stuck in a marriage to a smarmy college professor who may or may not be sleeping around with his students, the mystery of Candyman – or a mere killer, who knows? – absorbs her every waking moment. It is an obsession she comes to fetishize, a case study that allows for an escape from a humdrum routine.

Rules of horror movies dictate, however, that her quests must ultimately culminate in the embrace of a sensational antagonist, and the Candyman himself (played with growling earnest by Tony Todd) becomes a formidable opponent in the periphery of her daydreams. His is an interest that is absorbed in fatalistic grandeur; desiring to murder Helen and make her a symbol of his near-religious notoriety, he is seen as a ghostly stalker constantly prodding her insecurities all while she becomes accused of his murders. Later thrillers would question the reliability of the heroine’s perception of events in order to suggest psychological splintering, but here is a movie more straightforward than that. It is clear to us (and to Helen) that the Candyman is a legitimate image capable of great suffering in others, and though no one else can see him, believers freely submit to his celebrity. It is the police system (and those who still regard it with loyalty) that cannot see the plain truth, which is not coincidental; their participation would muddy the waters further, especially in a movie that sees them as a detriment to necessary answers.

Enthusiasts of the Hitchcock doctrine would call Helen’s misfortune a classic case of the “innocent person wrongfully accused” device, and though there are noteworthy strokes of emphasis that anchor such sentiments, the movie cares very little about what happens to her or what discoveries she may make. The reason: she never really knows who she should be fighting, or if there is a point when they both correlate to the continued suffering of poverty-stricken minorities. For Bernard Rose, the filmmaker who made the famous “Paperhouse,” there are no neutralizing parties in a war that requires malevolent figures to coexist with a corrupt class system. Each force is inherently created by some undisclosed truth that the screenplay doesn’t dare touch; to do so would be to bite off far more than anyone is willing to chew, and hey, who wants to do that in a horror movie? Yet what’s at least fascinating about “Candyman” is how it attempts to deal with both facets with some level of implicit realism. This is not a ham-handed horror show structured around the blood and guts of the delivery, nor is it some half-baked collection of suggestions that lead nowhere. However you slice it, Rose believed enough in Barker’s story to stare back at it with unwavering sincerity.

But the goals of the picture never come into focus, usually because it is too busy bouncing between the methodical deviations of the villain and the silent absurdity of injustice. At a certain point the audience is nearly ready to surrender to the misinformed cause, but then an even graver offense: the logistics of the plot begin to swirl in the underpinnings of absurdity. How, for example, is a woman that gains consciousness in an apartment after having slaughtered a dog – and potentially caused the disappearance of an infant – automatically charged with first degree murder? Without a body there is no legal ground to create such an accusation; furthermore, no sort of animal cruelty laws with the severity of prison terms were applicable in the time in which the story takes place. Later still, after a brutal murder goes down in Helen’s apartment and she is seen holding the knife, how is she automatically sent to an asylum instead of a jail cell before a psychiatric evaluation? Either this is a woman with the benefit of damn good lawyers, or she has officially fallen into the custody of the most incompetent police force in the history of movies.

There are genuine scares that dot the picture – some of them more direct than others, and some unnerving just because of their suggestive structure. A chase that occurs in Helen’s apartment building is particularly chilling, as is a sequence in which she calls upon the Candyman during a conversation with a psychiatrist. The vagueness of certain scenarios – particularly the one involving the murder of a dog – plays greatly into the feeling of uncertainty that permeates from the scenes, and both Virginia Madsen and Tony Todd bring those virtues to a crescendo of well-modulated exchanges (she as sublime and focused, he with unflinching cruelty). But none of what they or Rose are doing is drawn together out of clarity, and by the end we are left to wonder what we should be more scared by: an urban legend or a world weak-willed enough to accept it as an active presence in our lives. Whatever side of the discussion you choose to fall on might just depend on what you take into the story, but one thing is universal: the notion that both types of viewers (straight horror fans and social justice warriors) are unlikely to be moved out of boredom long enough to care much about any of the arguments here.

Produced by Clive Barker, Steve Golin, Gregory Goodman, Alan Poul and Sigurjon Sighvatsson; Directed and written by Bernard Rose; based on the short story “The Forbidden” by Clive Barker