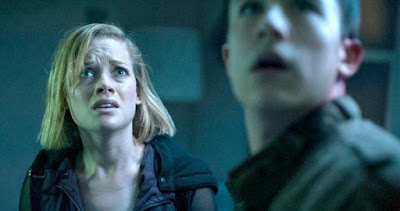 Theft of one’s property is a usually inspired by some external dilemma undermining the lives of the culprits. Seldom is the conviction spurred by mere greed or foolishness – it often comes from a place of desperation, an inkling to believe there is no way to escape a situation unless another’s money or assets can paint clearer paths through the confusion. Consider, for instance, what it means for young Rocky (Jane Levy) to belong to a trio of professional burglars in “Don’t Breathe” – though her team contains a token tough shot and a shy third wheel with a persistent crush on his female peer, all of her motives lead back to a necessity to escape a troubled family life filled with drugs, abusive stepfathers and prostitution. A ransacking of a stranger’s house is not so much an illegal act as it is an extreme measure that must lead to somewhere other than the cold mean streets of the Midwest, and though brief moments of self-awareness paint those deeds in ambiguity, there is no skepticism strong enough to keep her from that destiny. Surely a middle-income family in the suburbs can do without a few worldly possessions, after all, if it means an unlucky girl in the slums might use them to buy her way out of her own pathos.

Her flawed logic is the driving mechanism of many a thriller in recent times, most of them only as ambitious as the situations surrounding their characters. But “Don’t Breathe” has much deeper ulterior motives than what a mere synopsis might suggest, and in a narrative climate that would make such a troubled protagonist into the object of empathy, lines are blurred in ways that have rather novel consequences. The descent begins as easily as any of their numerous heists: after staking out the house of a new victim reportedly holding hundreds of thousands of dollars from a legal settlement, they discover that the home’s owner is a blind gulf war veteran, seemingly helpless to any impending illegal acts. But the realization has moral ramifications: namely, how does one justify subjecting such a man to such a damning punishment, especially given how much of a disadvantage he is at? Their uncertainty is sidelined foolishly by a vigilant suggestion that this amount of money will be the final prize of a lifestyle they are ready to leave behind. But as is the case of many characters staking such faith in the odds, they soon realize the error of their dubious choices.

But of course no smart film would bother with safe roads, and here is a movie that finds rather thrilling morsels in its gradual, claustrophobic descent into the halls of an old man’s labyrinth of fearsome traps. Though it is in the audience’s nature to assume some level of danger for these young characters well before they wander into the danger, rarely do our assumptions match the severity of what director Fede Alvarez finds; his terror comes from the discovery of dark secrets rather than mistaken stereotypes, which fuel a plot that moves into the heart of chaos with barely enough time to blink in between passages. And somewhere in the middle of these tense chases is our dual interest in those standing in the opposing corners: a young girl in desperate need of the money, and an aged loner whose own personal traumas mean he has little to lose when giving his invaders a taste of revenge. Who must the audience root for, and to what point does our sympathy dissipate and our instinct to pass judgment take over? Against our urge to fight the ethical implication of the premise, the movie blurs the boundaries too far for its characters to be easily pigeonholed.

For a good two thirds of a short 88-minute running time, that realization plays as a remarkable asset. Confident and skilled as seasoned veterans of this lifestyle, Rocky and her cohorts Money (Daniel Zovatto) and Alex (Dylan Minnette) have mastered the game of burglary thanks to off-screen connections: with a close relative working high up in a home security business, they have almost unrestricted access to system overrides in a variety of homes across the city. Alas, their common patterns usually turn up little in the way of financial gain; in a century of paranoia, suburban families are more apt to keep their money in banks, leaving behind only personal treasures for the taking. But then, in a key moment, a revelation rouses them to a new act: knowledge of a man living alone in an abandoned neighborhood in the outskirts of town, apparently in possession of a hefty sum of money after winning a court case against a drunk driver who killed his daughter. Naturally one of them (Alex) is conflicted to the point of nearly walking away, but Rocky’s unwavering thirst for happiness is unswayable; she agrees to rob this old man on the condition that she is let off afterwards, free to go out and find the live she has desperately craved.

The heist begins skillfully enough. A large dog in the side yard is fed a tranquilizer. She sneaks in through the downstairs bathroom window, and stalks her way through the halls to disarm the security system before it trips. There is a scene in which gas bombs are left upstairs in order to ensure the old man doesn’t wake up during the night, and then another where the three argue over whether to use a gun to destroy the locks on the basement door – perhaps the critical holding place for the treasures they seek. Unfortunately, their banter accomplishes little other than rouse the consciousness of their victim, who silently sneaks downstairs, intercepts the robbery and winds up overpowering – and then killing – Money. That leaves the other two in an even deadlier predicament: without the defense of a gun, their only hope of survival is to sneak around the house while the old man wanders it, hopefully without giving away their whereabouts (or the knowledge they are even there in the first place).

This scenario plays right into Alvarez’s fascination with dim tight spaces, a detail he capitalized on implicitly with his remake of “Evil Dead” three years prior. The difference, perhaps, is that the earlier endeavor offered him no chance of visual modulation, whereas “Don’t Breathe” puts him in the sort of taut exercise as David Fincher’s “Panic Room” – there are few places to hide and no easy escapes, even though the solution ought to be as simple as running out of a door. But for a blind man who remains mostly mute during the excursion, Stephen Lang exemplifies a rather startling dexterity that makes him formidable as an opponent. His hearing is heightened. His nose picks up scents easily (a key detail when he wanders into the entryway and smells the shoes of additional suspects). Swiftly and strategically the escape routes are destroyed and the two remaining burglars are cornered, leading to a fabulous sequence in which the old man cuts the power and forces his victims to wander the basement just as he does: with so sense of sight guiding their hiding spots.

But then there are other revelations that take over, leading the film towards a third act so wall-to-wall with false endings and cheap exercises in gratuity that one is left aghast by the nature of the details. It is believable, perhaps, that the old man would be equally as eager for revenge against the people who killed his daughter as he is towards those breaking into his house, but what in the world were Alvarez and his co-writer Rodo Sayagues thinking with some of these dark impulses? Were they last-ditch attempts to sway the audience favor towards one character over the other? What about the never-ending close calls of escape involving Rocky, the old man and the newly-conscious guard dog, who proves to be just as fearsome as his owner? The final 20 minutes are an absurd testament to the challenge of making good thrillers – often the setup can be so ingenious and skilled that no one remembers how to effectively stage a plausible resolution. If Fincher accomplished much more with “Panic Room,” it’s because he knew he was working within the confines of a character’s motives. There is no doubt that Alvarez has a knack for creating effective framing devices, and the movie is chock-full of good suspense. But by the end I couldn’t tell what he was more focused on: the plight of the girl, the empathy for the old man, or the sensation of dragging his audience through a barrage of insipid close calls.