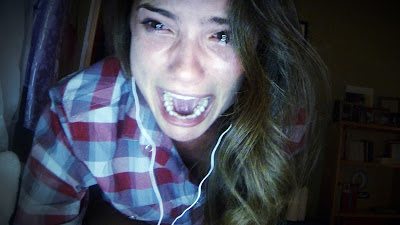 So rarely has a single genre of movies been as eager to adapt to the shifting dimensions of pop culture as that of horror. With each pass of time comes an eagerness to push the proverbial line of standard – some visual, others thematic – and inevitably the scope of the moviegoer is challenged to see beyond its routine. Oftentimes that requires the abandon of patience or personal judgment, especially when it comes to a concept that may be harrowing to confront. Those that are more interested in pressing on intellectual buttons are much more fun and refreshing to deal with: they understand the possibilities of novel techniques, at least if they are used to creative means. Think of both angles of that prospect as you move cautiously through the material of Leo Gabriadze’s “Unfriended,” a strange film about a vengeful spirit who comes back to haunt – and murder – a group of cyber-bullies who once claimed to be her friends. If one is to mention that the entire endeavor occurs on the computer screen of a teenage girl who flips between social media sites for 83 minutes, would you be annoyed by the concept, or intrigued by the method?

However you answer may depend on your perspective of the platform. For me, there’s a balance of fascination interlaced with impatience. The movie begins innocently enough, in which Blair (Shelley Hennig), a conventional teenager girl, engages in flirtatious online chatter with her young boyfriend. Perhaps that detail is nothing significant, but it comes on the onset of a rather important revelation: this is the day of the first anniversary of the death of Laura Barnes (Heather Sossaman), a teenage friend (or was she an enemy?) who committed suicide after someone posted a rather cruel and embarrassing video of her on Youtube (both it and the suicide video are shown early on, as framing devices). The audience understands the social implication of this premise because it has relevance in the modern world, where the Internet has given rise to such tormenting and usually seen rather tragic outcomes. But is this prospective night of terror – in which the two teens and four of their close friends engage in a Skype session and are strung along by an unseen hacker in the chat room – as monumental as the idea suggests? Older and wiser sorts would have brought much more wisdom to the scenario then a random assortment of kids, whose dialogue and decision-making feel too uninformed for much of this concept to stick.

Nonetheless, there are some noteworthy thrills amongst a plethora of urgent details. It is a quiet night in April of 2014, and six high school friends are entertaining one another across a series of social media sites when a weird thing happens: a faceless visitor comes into their group chat and inspires frenetic curiosity. They have no idea who or what it is – an actual person, or a system glitch? – but its arrival seems more than coincidental to another series of twists. Blair, previously good friends with the deceased Laura, gets a message from her inactive Facebook account. Blair thinks Mitch (Moses Storm), her boyfriend, might be playing a cruel prank on her. Then others in the chat group have active discussions on the matter, leading to a series of fights as each of their social media profiles take on a life of their own: some post defaming pictures, others leave behind threatening comments. But if none of the ones on the channel are actually touching the keyboard, what exactly is the source of all these mind games?

Then, just as the suggestion reaches a new facet of inexplicable coincidences, one of the six apparently winds up dead. The anonymous presence engages in a running commentary on the events, knowing far more than he or she should. The others play along, but their fear is not yet the dominant force of vexation – perhaps because a young mind isn’t as willing to admit that they are being manipulated in a medium they have so thoroughly mastered. But as the game escalates and the “hacker” claims to be the spirit of the deceased Laura, the movie’s trajectory alternates between “Scream” and “The Ring,” two of the most notable horror films of the last 20 years. Some of the material is, admittedly, effective; there is a scene in which Ken (Jacob Wysocki) demands vulgarly that the hidden assailant show himself in the chat window, and when the camera goes live it appears in the same room with him, hidden behind a basket. Such moments inspire a great many added questions in the audience: is this some sick joke put on by unseen participants in Laura’s world? Is it a game that some of the ones in the Skype channel have more involvement in than they let on? Or is it far simpler by the standards of horror, which usually resorts to the blanket rationalization that most strange events can be explained by the acknowledgment of a supernatural presence?

A movie this simplistic in structure need not challenge itself with the pros and cons of either scenario, but by taking pages from the likes of “Scream” there ought to be some intellectual footing for the characters to lean on. Alas, those in “Unfriended” are not exactly the sharpest knives in the drawer; as individual entities they simply shout and talk over one another like textbook examples of teenagers in the social media generation, and together they don’t provide a very thorough case in favor of their perseverance through the events. For the sake of a hypothetical outcome, let’s assume that many of them do, in fact, have an active involvement in the events that lead to Laura’s suicide: if they are not ashamed of their involvement, is there any substantial reason we should care in how their punishments pan out? Not at all. The movie is all brutal sensation and no intellectual context. That is not to suggest that the ruckus of what goes on in those Skype windows is any less interesting or effective – I counted at least five moments where I was legitimately shocked by what I saw – but if the most sympathetic being on screen turns out to be the person who took her own life, are you working with a legitimate horror film at all, or simply a collection of experimental horror devices?

The silver lining: Leo Gabriadze, a new filmmaker, has enough of a finger on the pulse of these underlying sentiments to inform future excursions, assuming he capitalizes on them. Many of the setups are ingenious, including a clever sequence in which the four remaining victims are forced to play a game of revealing secrets in order to determine who lives, and the scenarios that surround the outcome are framed well enough to neutralize any questions we have about logistics or plausibility. In many regards what “Unfriended” does best is show horror film buffs the way that young minds of today operate, and how their lack of individualism in modern technological mediums can undermine their perspective enough to make them unwilling participants in an unforgivable agenda. But for anyone who descends into these scenes expecting a sincere argument against the rampant problem of online bullying, all they will find is characters who perpetuate all the obstacles that prevent us from fixing the issue.