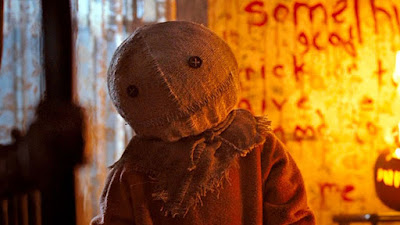 The opening scene of “Trick ‘R Treat” shows a married couple arriving home at the end of a long Halloween celebration in the hopes of settling into less glamorous routines. The husband ventures upstairs and turns on pornography; the wife, eager to remove the decorations littering her front yard, begins the arduous process of dismantling elaborate displays of fake limbs and ghostly figures. A dialogue exchange acts as a shallow warning against the practice; he suggests blowing out the candle on the pumpkin by the gate violates the code of the holiday, which must be followed by fatal consequences. Shortly before she is murdered and disfigured by a figure hiding beneath bed sheets on the lawn, there is a moment where she stops to proclaim, without regret, that she “hates Halloween.” After a few short minutes into the bad movie she is trapped in, we can understand why; to be lost in the meandering chaos of a night like this with little to define the terror itself is a fate worse than any scares that might exist in the shadows. For the audience, the true horror is that anyone involved thinks they are pitching these curve balls for some great purpose.

Yet warning signs suggest there are genuine motives to Michael Dougherty’s strange madness. The film deals with five interlocking stories in a place called Warren Valley, Ohio, a place so small and remote that newscasters must inevitably paint it as a grandiose epicenter for tradition. Here, Halloween is seen as more than a mere holiday: it is a pastime that requires unfiltered loyalty, lest the spirits from beyond become roused into violence against innocuous spectators. Rules exist for a reason, and those that break them are susceptible to cruel and unusual punishment. Some, perhaps, are made acceptable by the fact that such rules keep their ravenous impulses in check, and that without them they are free to roam the wilds as monsters in the night. Ultimately many of them must converge as those boundaries between the living and the dead are blurred further, ultimately inspiring tremendous bloodshed on the streets while innocent trick-or-treaters are attempting to retain their sense of enjoyment.

If I sound less than firm in explaining this premise, it’s because I’m reciting much of it from the Internet Movie Database, where I was able to acquire a synopsis that sounded more coherent than what became scribbled down on a notepad. Watching the movie itself certainly doesn’t contribute much in the way of clarity, alas. Nor, for that matter, did the motives of the characters, which we would normally look to when the fog of a plot reduces our ability to reason with details. But not even they are constructed on the foundation of sensible human observation; they play like machines of the macabre, so desensitized by the danger of the atmosphere that they can no longer tell the difference between a normal interaction and one that threatens their lives. A scene between a high school principal and his young son painfully emphasizes this notion; after he has caused the death of a student on his front lawn, the man is seen taking the body to his backyard, nearly discovered as he attempts to bury it (or one of countless others, who knows?), and then returns inside for a “carving” with his son, who looks on at otherwise horrific details as if they were simply images in a happy cartoon.

Those bizarre behaviors are amplified beyond the mere periphery of the story, which is less interested in singular goals and more driven by complicated points. The primary focus seems to involve a group of teenage girls, all dressed up like Disney princesses who are off to join an elaborate party of teenagers somewhere in the nearby woods. Laurie (Anna Paquin), the most virginal of the troupe, lingers in town while her more experienced peers rush off with men they meet on the street; as she meanders through hordes of costumes during a Halloween parade, a man in a mask is seen taking a distant liking to her, inevitably for the purpose of following her off into the woods for the purpose of a violent impulse. How do we know? Because an earlier scene shows the same culprit attack another woman in a back alley before killing her out in the open, which certainly wouldn’t attract unwanted attention when it’s happening on a day full of natural pranksters and elaborate showmanship.

Another one of the stories deals with a group of teenagers who hope to scare the heck out of socially awkward Macy (Britt McKillip), a girl whose only inadequacy is that she isn’t aware enough to know when others intend to be mean. Most movies would at least offer some level of insight as to why others would go to such cruel lengths (however warped), but far be it from me to accuse “Trick ‘R Treat” of marching to that drummer’s beat: what we get, in essence, is a brief setup sequence of the four teenagers meeting up with Macy (dressed as a witch), briefly remarking on her strange demeanor and then luring her out into the woods to “honor” the deceased of a tragic story in the town’s past. Violence and horror ensue, sometimes with abundant script-flipping, and then the film doubles back to find subtle links to many of the outlying stories, including one involving a crusty old neighbor who may be linked to the fatal legend spoken of in the previous story. The binding core between the five of them is, I guess, that a routine of celebration never stays the way it is meant to, because people are destined to act outside of the unspoken boundaries of such a cursed holiday. And when they do, fate must inevitably balance their misbehavior with equal amounts of pain and suffering, none of which warrants contemplation when it appears to have always been the going trend of this town’s deadened residents.

None of this congeals; it all stammers around on the screen in lopsided showmanship, as if to sell an illusion of satire that isn’t even there. Others have certainly applauded the attempt (the film’s rating on Rotten Tomatoes sits firmly at an 86 percent as of this writing), and in acknowledging that I am caught in the allure of wonder: what exactly did they see that inspired admiration? Certainly not the underlying deception of the screenplay, which is obvious and awkward. Certainly not the meaning of the director, whose insights were more thoroughly realized in “Krampus,” a far superior film. Certainly not any of the attempts for the actors to wink at the camera, as if to assume they even understood the punchline of the joke. I remain oblivious as to what mold the endeavor fits. Is it parody? Ironic reflection? Comical massacre? If “Trick ‘R Treat” speaks a language that I am simply not fluent in, then those that have grasped its intentions have every reason to be happy with the end result. And to that end, mere words in a movie review cannot express how much I just don’t care.