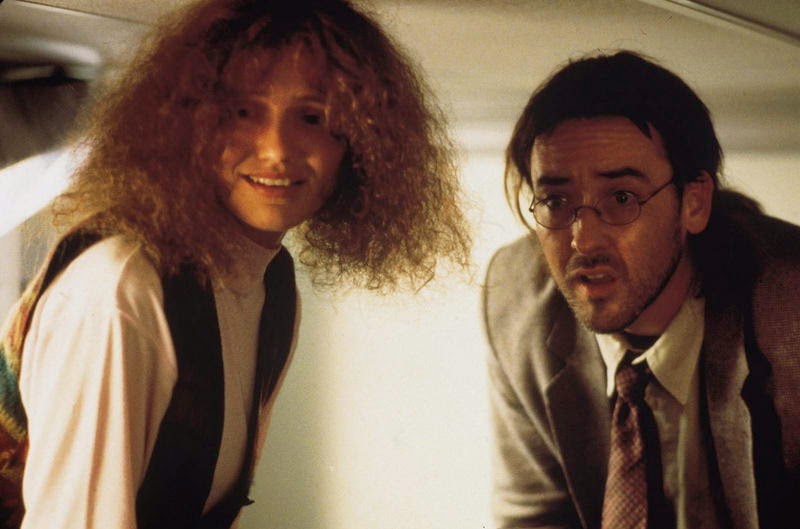 The movie erupts with such ingenuity that we relish the density of the unusual premise, and admire the sense of otherworldliness as its characters journey through a land of fantasy-based logic by using manipulation, conceit and desperation as their resources. Certain movies are shameful for snubbing the laws of reality, but "Being John Malkovich" does not once feel sidetracked by the zany twists. In fact, its bizarre ingredient is what makes it all the more laudable.

John Cusack stars as Craig Schwartz, the puppeteer in question, who makes an intriguing discovery while behind his desk on the 7½ floor of the office building. After learning unusual things about the people he works around (his boss is a 105-year-old nymphomaniac, and the secretary can convince anyone that they have speech impediments), Craig becomes sidetracked for a brief moment at his desk, and drops papers behind a file cabinet. As he pulls it out to retrieve them, he finds a small door right behind the cabinet; one that has a tunnel extending to an unknown landscape deep inside. Curious, Craig journeys down into the portal, and for 15 minutes, is inside the very mind of actor John Malkovich.

The discovery generates an enthusiastic response for Craig, who in turn offers many others to experience this intriguing find for the sum of $200. But it all becomes rather complex, so to speak, when an office worker that Craig obsesses about named Maxine begins dating the actual Malkovich; Mr. Schwartz, and his wife, a lonely woman who wants to be a man played by Cameron Diaz, are so fond of this office worker that, when she and Mr. Malkovich engage in intercourse, the couple takes turns in traveling the portal so they can be part of the sexual activities. In a freak occurrence, the real Malkovich winds up traveling through the portal, essentially descending into the nightmarish world that is his own mind.

The key to all of this success is in the spaciousness of the approach--there is such a massive amount of atmosphere that the characters are never confined to the limits of real life (sometimes we feel that whatever happens in the next frame, whether it be unforeseen or not, is lifted straight out of one of their imaginations). Charlie Kaufman's script turns all of its characters into likable pawns of a great big chess game, in which the next move is only envisioned by those who create it; especially effective is Cameron Diaz as Craig's wife Lotte, who is ignored because of her extensive ugliness, and curious about what it would be like to live as a man. Given the massive transformation she has undergone (and the fact that she embodies the strongest emotions of anyone in the whole movie), her performance is Oscar material. Another influence--the man used as a guinea pig for these portal journeys, John Malkovich. I admire Mr. Malkovich as much as the next guy, but Kaufman's screenplay seems to hit the bullet on the nose when treating his character in the story as the non-celebrity we have often fancied (most of the people involved in the plot cannot exactly remember what movies he starred in).

The picture was directed by Spike Jonze, who is new to filmmaking, but obviously born to be associated with it. He shows all the necessary strengths in determining a strong director, from his use of distinctive camera shots to his uncanny vision of people urging to step out of their bodies to experience the life of another. Once the end credits have rolled, we realize we have journeyed through an incredible mind here, and I'm not referring to John Malkovich's.