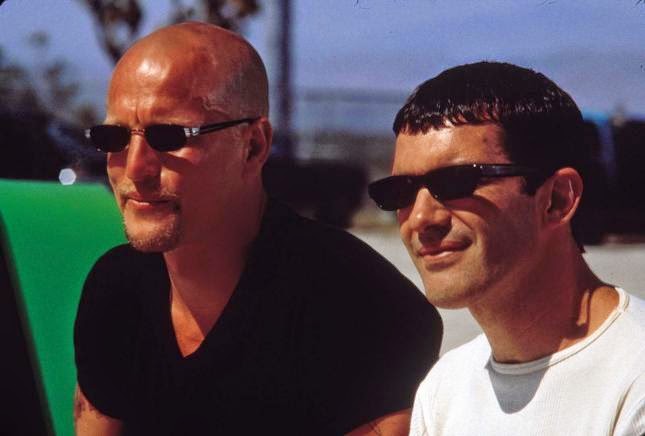 This is the deepest flaw of "Play It To The Bone," a road movie about two boxers who are headed to Las Vegas for a fight in which they must compete against each other. Certainly stars Antonio Banderas and Woody Harrelson are the kind of actors who can generate enough on-screen chemistry to help enlighten any overly-thick material. But alas, the script they are fed here is so incredibly misconceived that even their performances are buried. And as for the violent last scenes, which are never over-the-top, the immense battle in the boxing ring is essentially anticlimactic, as if the relationship between these two friends doesn't mean anything when it comes down to the final moment. Exactly what did director Ron Shelton want to say to his audience with this thing? Nothing really, other than that people should be expected to hurt each other for making a quick buck.

Many of the minor details are even dimwitted. When both Cesar Dominguez (Antonio Banderas) and Vince Boudreau (Woody Harrelson) have apparently struck a dead end in their boxing careers, both get a call from promoters in Las Vegas, who confess that the two expected heavyweight fighters cannot, for one reason or another, attend the scheduled fight. If they manage to make it to Las Vegas in six hours, they have a chance at regaining their acclaim (not to mention splitting $100,000). Cesar and Vince are, of course, very good friends; both are not too fond of the idea of beating up on one another. But heck, like so many movie characters before them, they put money first, and friendship second.

Their first task is to get to Las Vegas from Los Angeles. But do they fly to their destination? Heck no; that would only defeat the purpose of a road movie. Instead, Cesar turns to his girlfriend (which is, coincidentally, Vince's ex), in hopes that they can borrow her car to get to where they are needed. She has one of those old 1960s convertibles, ideal for the road movie setup; afterwards, they set off on their journey.

The characters have as much depth as a pain of glass. The most displeasing of these limited studies are the two leads, Vince and Cesar. Antonio Banderas and Woody Harrelson are both admirable actors, but they get completely shoveled under the plot by typical one-dimensional qualities; it is especially shallow when the script starts them out as good friends, deteriorates the relationship, and makes them complete enemies by the last act. Even Lucy Liu, who plays a scene-stealing nymphomaniac, lacks much of the charm from her persona on the rather humorous "Ally McBeal." There is one moment when her character, an obvious wanton slut, and Vince, a born-again Christian, do the nasty behind a restaurant to the sound of gospel music playing on the soundtrack. What is the significance of this, or any of the other sexual overtones (there is also a series of flashbacks that take place in between rounds at the end, in which both fighters are thinking of nudists)?

Basically, the underlying theme that tries to support this structure suggests that friendship is less important than money, and one should pursue the latter no matter who will get hurt along the way. In some of the final moments, there's an awful lot of hurting too; Woody Harrelson, who has also been in another Shelton film ("White Men Can't Jump"), commented after wrapping up production that Banderas, in real life, gave him a couple of hurtful punches while filming the scenes. It is a necessity for any moviemaker to make on-screen displays look as realistic as possible; unfortunately, whatever actually went down between Banderas and Harrelson is a bit too extreme for a movie like this. No two friends should fight each other for money, much less "Play It To The Bone."