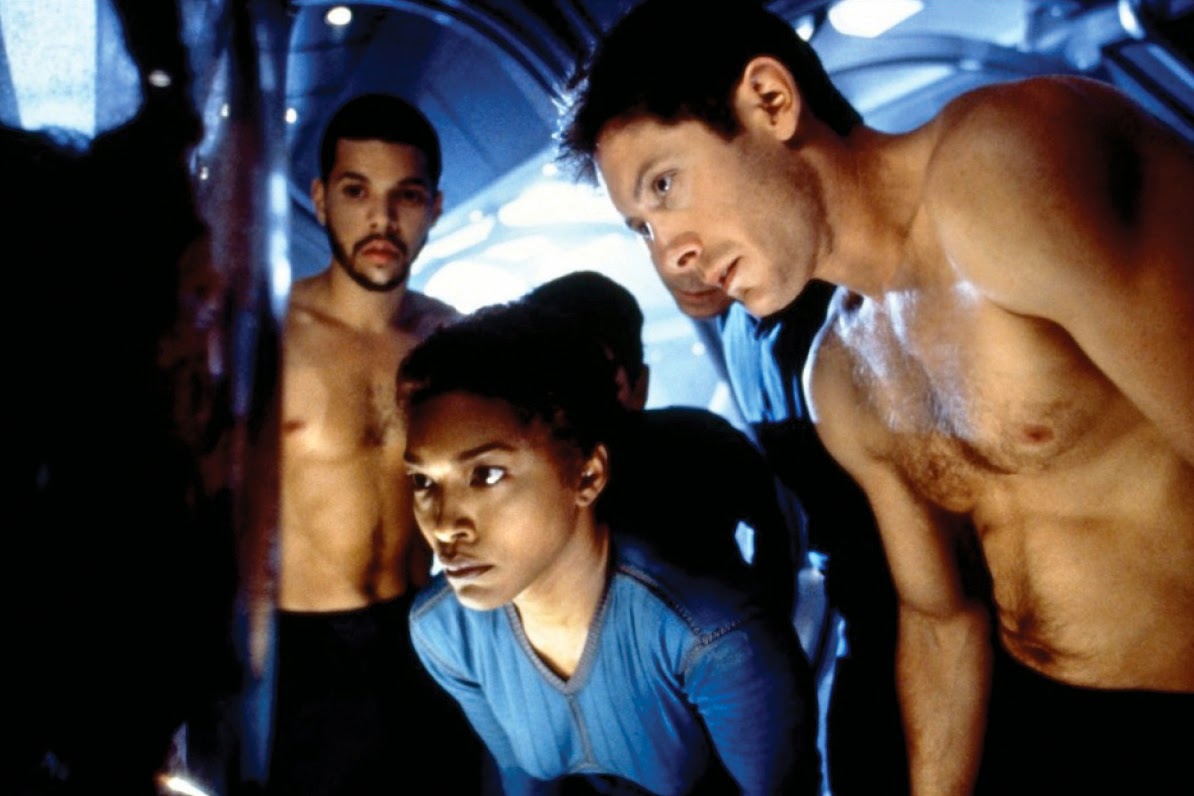 Here is an example of the sheer stupidity of modern cinema blockbusters; an arrogant, badly realized vision that pits the viewer up against characters that are written in one-dimensional territory, and visuals that are unimpressive, even for fans of the cheesy special effects in most space epics. It's not hard to see why director Walter Hill had his name removed from this fiasco; the whole film plays like a series of technical outtakes, in which the camera is almost always unstable, shaking in tense moments, and zooming in for unnecessary close-ups during other scenes. Given the fact that the film is slapped with a PG-13, and its characters are almost always completely nude, we can see why some of the camera shots are so jumbled. Unfortunately, none of this is excusable; without any type of pace, "Supernova" could not have possibly succeeded, even if there had been a decent script attached.

In a story bound for its own Armageddon, the space vessel known as Nightengale slips through time using an intense plasma-like fuel to propel itself through the galaxy (necessary in attaining the speed of light). From over 30,000 light years away comes a distress call at a moon base, where workers have apparently been injured by an explosion at a dig sight. To arrive at this location, the members of the vessel strip themselves nude and then become enclosed in glass structures, which are used to prevent death from the intense speed they hope to reach. But one of the structures does not operate correctly, and the ship's captain dies as his face becomes fused to the glass by the intense speed.

The ship's crew consists of many familiar faces: up front is James Spader as Nick Vanzant, a recovering space pilot who has been assigned to take over for the recently-deceased captain of Nightengale. Next in line is Dr. Kaela Evers (Angela Basset), a woman who shares a past with he who has sent the distress signal, and who fears that the lives of those on the ship can be endangered by his sudden arrival. Robin Tunney, recently seen in the cheerfully absurd "End Of Days," plays Danika Lund, a woman who desperately wants to be pregnant, and fears that her current man, the aging Yerzy Penalosa (Lou Diamond Phillips), might not be an appropriate father. Rounding out the cast is Wilson Cruz as Benj Sotomejor, a space marine who is in love with the ship's computer Missy, and Robert Foster as A.J. Marley, the original captain who enjoys cartoons, even though they have, apparently, been banned in the 21st century.

The man they pick up goes by the name of Troy, and he is played by Peter Facinelli. Dr. Evers, of course, does not recognize the man from her past right from the beginning; in fact, Troy does not even try to tell the woman who he really is until close to the end. And by that point, we have grown tired of the logic-less and disoriented premise; Troy has, you see, brought some cargo on board with him--an egg-shaped cell that glows with a fluorescent hue. Missy, the ship's computer, calls its membrane a 9th-dimension organism, something that cannot be described by any human vocabulary. What is known, however, is that the powers inside have the strength to either rejuvenate or destroy entire galaxies; if it ever explodes, then the entire universe could be at risk. Once all details have been established, and Troy's contact with the organism has turned him into a monster, the movie ends, predictably, as the organism explodes just when the ship is able to break out of the galaxy it is in. But the film is not even clever enough to give us a complete ending. It only gives us half.

The production history is enough reason to expect all this absurdity. When MGM budgeted the film over $60 million, its script reportedly went through several rewrites, all while trying to settle on a director. It found one man willing to do the job, but he eventually walked out of the position. Later, the remainder of the project was picked up by Walter Hill, who, in turn, stayed to finish the film, only to request his name be removed. Standard procedure for this sort of thing occurs when the director is unhappy with the way the film has been edited and/or shot, and the director's name is then replaced by a much-known false one. But "Supernova" is so bad that an entire new pseudonym has been implemented; rather than the traditional "Alan Smithee," the studio has warranted the name "Thomas Lee," supposedly because the other is, so to speak, becoming too known for its own good (ever see "An Alan Smithee Film: Burn Hollywood Burn?"). Other notable production problems showed up along the way, and the film was then shelved (reportedly) for almost two years, eventually winding up in theaters without the privilege of critic's screenings (another clue to misfortune).

The picture has been marketed for release in mid-January, a traditional dumping ground for movies that studios have lost complete faith in. The past few years have surely proved that notion; in 1998, "Deep Rising" and "Phantoms," two films about gooey creatures, slithered their way into the multiplexes, and last year, the critically panned "Virus" showed up with the same kind of response. But at least those movies had sporadically amusing moments; "Supernova" is easily the worst of this batch. And that's saying something.