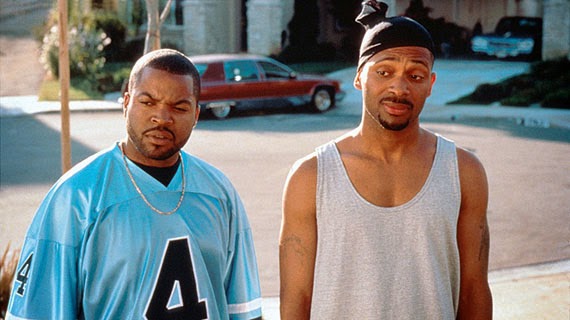 Returning to his cinematic roots is rapper Ice Cube, who has proven with his newer efforts that it is possible for rap artists to find further success in the movies. After "Friday" in 1995 came "Anaconda," a decidedly-silly creature feature that boasted some decent physical performances from both he and costar Jennifer Lopez. Until recently, Cube's film career had seemingly halted--then out from nowhere came the smart and visual "Three Kings," in which he starred alongside Mark Wahlberg and George Clooney as a Desert Storm soldier in search of a large gold stash deep in the Middle East. The movie, strangely enough, showcased Cube's unforeseen dramatic capabilities, offering us a glimpse into a potentially bright future. But who says that actors learn from their mistakes, anyway?

"Next Friday" is a miscalculation in every sense of the word--a lame, moronic, belligerent and shallow comedy that is never funny, never intellectual, and almost always offensive. By asking any audience to revisit the cheaply-produced slums that helped establish his career back in 1995, Ice Cube loses complete sight of a vivid future in Hollywood. His movie avoids even the simplest notions of success; it's like watching a great big pile of reject videos from one of those high school talent show tryouts.

You'd be surprised how few the similarities are between this movie and its predecessor. The picture begins with one of the dumbest jokes in general comedies: a sudden conflict arises when a man trips, falls, and is met at the ground by dog excrement. Ice Cube plays Craig Jones, and his uncle is the unfortunate victim to this detestable accident, which leaves him smelling like the newspaper at the base of a liter box. How odd that that he never changes clothes afterwards, and uses an aerosol can throughout the movie to help cover up the stench.

Since the entire film takes place in one day, the plot confines its characters to many narrative limitations. Among these problems is the introduction of a Chicano family, neighbored by Craig's uncle in the 'burbs; once they are briefly introduced, a hostility generates between them and Craig, which, sad to say, results in one long dialogue exchange after another, featuring about two clean words and half-a-dozen other slurs between both arguing sides. The fact that the next-door family deals with drugs merely hazes the real issue here, and at the end of all these stupid battles (not to mention some minor, in-between subplots), Craig announces that he loves Fridays. But for what reason? Are they an excuse to be rude, obnoxious and sexist?

I tend to make violent outbursts at the sight of movies like this; it seems so unfair that writers would be willing to expose a viewer to such horrible characterizations like these, especially when the players entertain themselves by slamming ethnic groups, and indulging in sexist behavior (many of the women in the film are referred to merely as "hoes" and "bitches"). "Friday" was at least able to provoke anger with all of these dreadful aspects, but "Next Friday" is filmed at such a dead and endless pace that surely even the filmmakers on the set were yawning the entire time. This may very well be the first film ever produced that aims for ground zero, and misses.

Every minor technical and dramatic aspect is flawed, and the source material is as gaudy as it is depressing. Written by Cube himself, we get the feeling that no one bothered to request a second draft of this screenplay, probably because the very idea would scar Ice Cube's ego. Unfortunately, every heated remark I make about this travesty will make the film even more invulnerable to criticism, so I shall end my anger here (is there any denying that the movie will be a box office hit because of the name value?). In any case, let the truth be known to whomever enters the theater--"Next Friday" is the kind of movie that college film classes discuss when on the topic of "what not to do during filmmaking."