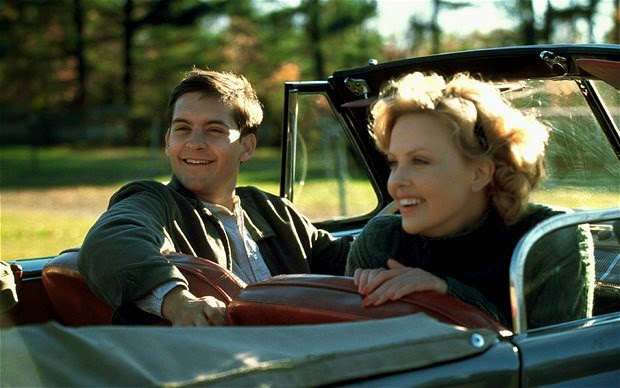 Might this have been easier if I had at least read John Irving's "The Cider House Rules?" Maybe. But why anyone be required to do so much research for something that only lasts 131 minutes? Certain adaptations, like "Beloved," are stabilized by their clarity and gathering of the necessary details found within the texts. Here is a movie that plays like a train traveling at great distance, but one that forgets to open up the windows for passengers who are curious to see what is on the outside. On a surface level, the film is richly textured and well acted. We wish it was deeper than that, but its empty focus and sluggish pace interfere drastically with any virtues.

The film stars Tobey Maguire, who has, at least up to this point, given us a few very exceptional performances. He plays Homer Wells, a live-in assistant to Dr. Wilbur Larch (Michael Caine) at a polite little orphanage somewhere in the state of Maine. Homer's life is hardly a difficult one without parents; he and the others that live there have snowball fights, eat ice cream, share secrets, and do all those other things normal children are expected to. But the lad one day chooses to venture outside the walls of his home to pursue something greater. Despite living in Maine, Homer has never seen the ocean. That should give you an idea of exactly what kind of person this is.

Homer gets his chance when two people, an Air Force officer named Wally Worthington (Paul Rudd) and his girl Candy Kendall (Charlize Theron), stop by the orphanage so that she can have an abortion. Homer searches for himself in such a way that it requires distancing from the home he has come to know. As soon as Candy and Wally are ready to hit the road, Homer hitches a ride along with them.

The movie's entire direction is slow and painful; slow for those who are trying to understand all of the situations, and painful for those who have given up even trying. Many of the themes explored in the picture, like racism and responsibility, are not given clear thought and are sometimes even abandoned before a resolution has been brought up. One of the most painfully unsure aspects of the film's material is the issue of abortion; there are scenes in which Dr. Larch, a wise physician, prepares to perform one, and his assistant Homer becomes dead-set against the very idea. As to be expected, the film tries to make a statement on this touchy subject by giving its lead characters different views. But what is the movie in favor of without a complete analysis? Is it saying that Dr. Larch is right, or is it saying that Homer's belief is the more logical direction? There isn't any real clear answer here, even though every human being should be able to make that decision for themselves.

A lot of the substance is comprehensible on a surface level, and yet the conception lacks passion during its more intimate moments. Oftentimes the director lets his cinematographer interfere with establishing the plot; when certain situations should be explain, he resorts to several camera shots in which the lens travels over hills and mountains, capturing the splendor of the landscape. But landscapes are one thing--a lamely realized script does nothing to help them.

Clearly the story belongs to Homer, and his quest to find enjoyment of life outside of the orphanage. To his credit, I am praising the film on its casting; for what under-explored characters they are given, Tobey Maguire, Charlize Theron, Michael Caine and the others manage to provide subtle yet smooth renditions. But in the long hall, not much can be said about the lack of focus or the sheer frustration that the screenplay so vividly inflicts. Many people have wondered what it would feel like to suddenly get lost in a massive wilderness without a map to guide them back. "The Cider House Rules" puts its viewers into that situation.